A serving of history – The Hindu

Teetering precariously over that fine line between morbidity and a sensorial blast from the past is ‘The Titanic Menu’, served at the Rayanne House restaurant in Belfast, Northern Ireland. The sumptuous, nine-course meal features everything from a main of pan-seared filet mignon topped with foie gras to spiced peaches in chartreuse jelly for “pud”, as the British like to call dessert.

This menu is said to be a recreation of the last meal that was served in the first-class restaurant aboard the ill-fated Titanic. A vessel that was designed and built in Belfast between 1909 and 1912.

I clearly remember partaking in this edible extravaganza almost a decade ago when on a work trip to Belfast, where I found myself seated in the beautiful period dining room of the restaurant, which overlooks the Belfast Lough, from where the Titanic would have set sail on her maiden voyage on April 10, 1912.

Ironically, as I write this piece on another April 10 — exactly 109 years later — I am fresh off digesting another nugget of Titanic food trivia. Thanks to a fascinating little book that I received on a recent birthday, I learn that something called a Waldorf pudding too was part of that final dinner. Although not to be confused with the similarly named American Waldorf salad, this dessert too features apples and walnuts, but also raisins, is baked in individual ramekins, and spiced with ginger and nutmeg.

The book in question is called History Dishtory: Adventures and Recipes from the Past by Ranjini Rao and Ruchira Ramanujam. Featuring a brother and sister duo and a cutting-edge app that allows them to time-travel to 15 important junctures in history, the book also includes a recipe inspired by each event. From the Renaissance in Italy to the aforementioned sinking of the Titanic (Waldorf pudding!) and from the first men landing on the Moon to Mahatma Gandhi’s Dandi Salt March.

Although purported to be a children’s book, this is one of those easy reads that sucks you into its pages and keeps you captive within, never mind your age! Each page holds forth a promise of that irresistible quartet of food, history, adventure and trivia. Making it the perfect, vicarious escape from the mentally debilitating second phase of the pandemic and the second major lockdown in Mumbai.

My unbridled love for all things potato takes me back to the French Revolution as mentioned in the book. This was when members of the Third Estate — as commoners were referred to then — turned to the previously shunned tuber in lieu of bread. The latter’s cost had increased to over 80% of their earnings, and people were forced to rediscover the humble potato. Thus charting the course for dishes like the ubiquitous mashed potatoes and the relatively unknown Hachis Parmentier, which is a shepherd’s pie-like dish made with beef and potatoes.

The book also tells me that long before ice and chocolate sculptures became all the rage at banquets and feasts that they are now, butter sculptures were the ‘in thing’ during the Renaissance. Interestingly, on further research, I gather that in faraway Tibet, the Buddhist practice of carving mandalas and deities from brightly coloured blocks of yak butter began roughly at the same time in the 14th century. Medieval viral trends, one might even say!

And for all those like me who are revolted by the idea of pineapple and grapes (hello, Jamie Oliver!) as pizza toppings, pizzas flavoured with rose water and topped with sugar and pine nuts were quite de rigueur during the Renaissance. It seems like bad ideas transcend eras!

Back to the future

Amethyst Bamboo 9X. That’s the name of what is believed to be the world’s most expensive salt. It retails for approximately $272 for a one-pound bag. It’s trivia like this about the Korean Amethyst Bamboo salt that I glean from the chapter on Mahatma Gandhi’s famous salt march that ended in Dandi, Gujarat, on April 5, 1930.

My interest in India’s very own natural protein powder aka sattu is piqued when I learn that Nepalese Sherpas on their perilous treks up Mt. Everest consume copious amounts of the stuff. Made using roasted gram flour, barley or corn, the nutty-tasting flour can either be eaten plain or mixed with water or milk for a hearty porridge. Sattu is also considered an effective coolant when made into a refreshing sherbet.

The book’s penultimate chapter explores the future of food. But strangely, when I take this journey, I look into the past. Seemingly straight out of science fiction, the dehydrated chicken salad and freeze-dried fruit served aboard the moon-bound Apollo 11 way back in 1969 may very well have served as a blueprint for our consumption of food in the decades ahead. With concepts like molecular gastronomy and cryogenic cookery throwing light on the way forward.

We’ve already seen the dawn of lab-produced ‘meat’ and the vegan-friendly, plant-based impossible burger. The million dollar question now is, “What’s next?” 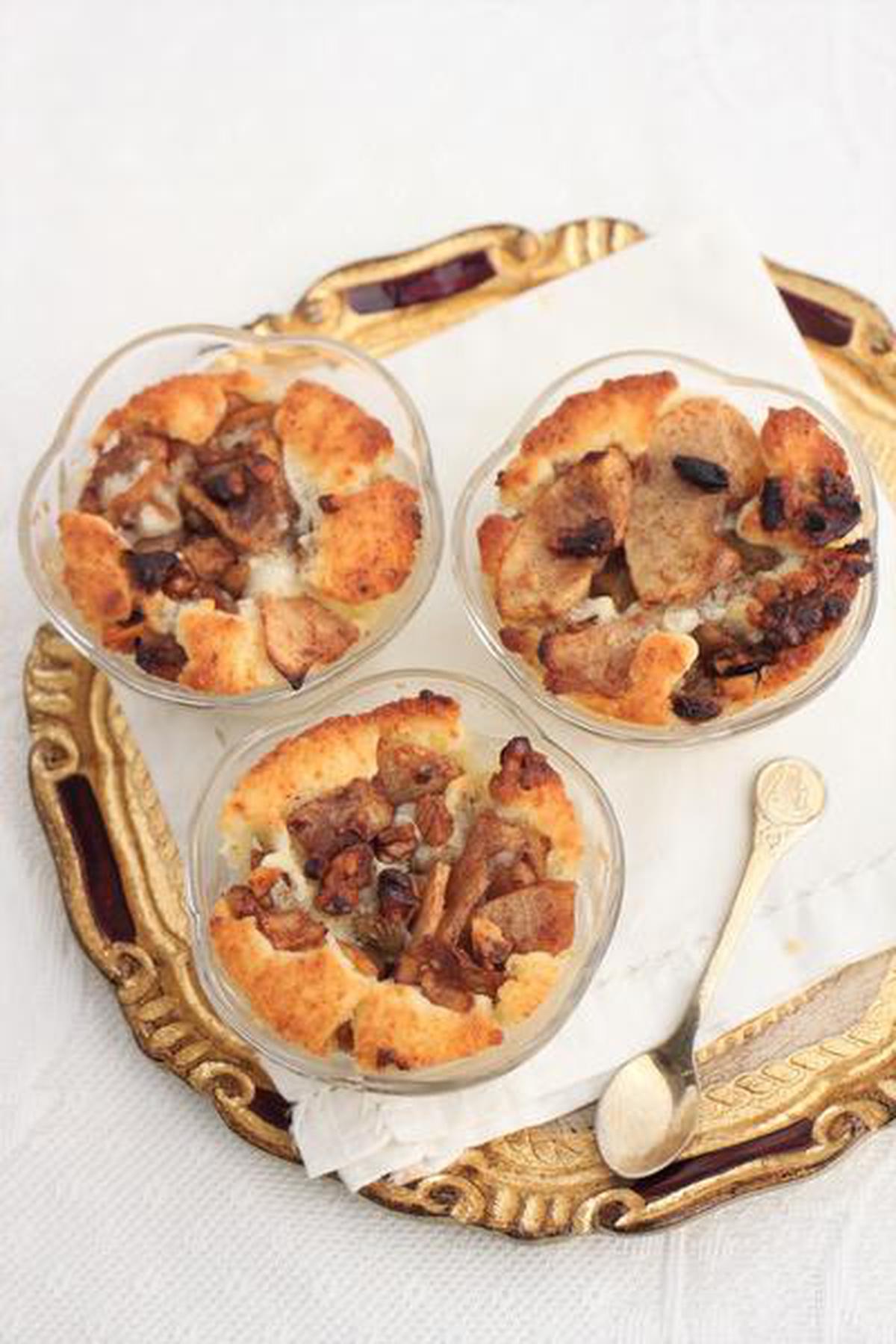 1. Preheat the oven to 180°C. Peel the apples and remove their core. Thinly slice the apples and place them in a glass bowl. Sprinkle the cinnamon, ginger and nutmeg over the apples. Toss well using a spoon. Microwave the apples on full power for 2 minutes.

2. Meanwhile chop the roasted walnuts. Mix the raisins and walnuts with the apples. Set aside.

3. Grind the sugar in a mixer-grinder. Place the ground sugar, flour and baking powder in another bowl and whisk well. Pour in the milk and whisk until smooth. Transfer the batter to a jug to pour it easily.

5. Spoon the apple mixture on top of the batter, adding an equal amount in each ramekin. Place the ramekins on a baking sheet and carefully put it in the oven.

Sharing and caring begins from the kitchen amid the pandemic