Certainly not for the faint-hearted, but animal blood has played a crucial role in the culinary ‘coming of age’ of a budding gourmand

If you were to talk to those who knew me while I was growing up, chances are their recollections of me would be peppered with adjectives like ‘annoyingly smarmy’, ‘insufferable little know-it-all’, and other not-so-flattering sobriquets. And they would not be far off the mark. More often than not, my “over-smart attitude”—as my father loved to call it—would get me into a serious spot of bother. But every now and then, it also took me down a serendipitous path of delicious discoveries.

The summer of my 10th year spent vacationing around South East Asia was one such time. Insisting on ordering a ‘sundae’ for myself at a Korean restaurant in Singapore and paying absolutely no heed to the flustered server’s suggestion that I order something else, I gluttonously waited for my frozen treat to materialise onto the table. The now-sniggering server plonked down a plate upon which was placed a blistered, coiled link of a dark brown, almost blackish sausage that he proclaimed with a flourish as “sundae!”. That is how I was introduced to the wonders of the delicious Korean pig’s blood grilled sausage also known as sundae.

Over the years, I would make it my mission to scope out dishes that —pardon the morbidity — satiated my ‘blood cravings’. From imparting that unmistakable iron-y flavour to an Asian stir-fry to some much-needed heft to a thin gravy or simply bestowing that rich, heaemoglobic, scarlet depth of colour to a stew, animal blood holds sway the world over. The concept of animal blood as an ingredient and dare-I-say a delicacy is firmly etched into the culinary lexicon of most countries’ food cultures for centuries.

On a safari to Kenya in the mid-2000s, I partook in the age-old Maasai tribal custom of knocking back a cocktail of bull’s blood and milk. Freshly siphoned off the beast’s jugular vein, the blood is quickly mixed with cow’s milk to avoid curdling and served warm from a hollowed bull’s horn. While doing my post-graduation degree in the U.K., I fell in love with the crumbly, oaty taste of a generous slab of pig’s blood sausage called black pudding served under fried eggs for breakfast in the cafeteria of my halls of residence. 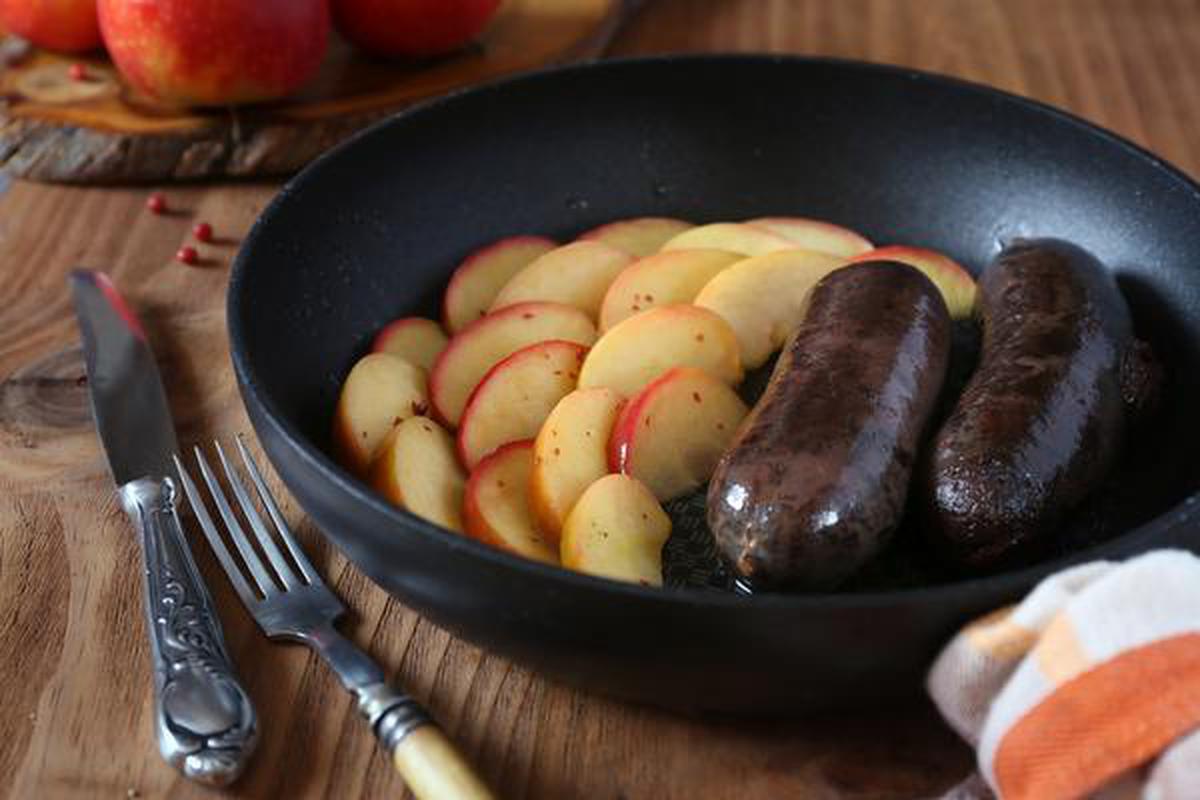 Weekend trips to next-door France introduced me to their iteration of the adored pig’s blood sausage called boudin noir, that is best paired with sautéed apples. On a two-week exchange trip to Guangzhou, I saw my Chinese host family speak reverentially of what they know as congealed pig or duck’s blood tofu called xie dòufun that is the main ingredient of the hallowed, fiery stew aptly called hot pot. My blood quest would get further intensified in places like Laos and in northeast Thailand where a surprisingly fresh-tasting mountain salad called laap sees raw minced pork mixed with spices and copious amounts of pig’s blood. On a recent, pre-pandemic work trip to Scandinavia, I gourmandised my way through the wonderfully flavoursome pig’s blood pancake called blodplättar in Sweden and veriohukainen in Finland.

And if you think these are foreign and exotic tastes, India too has a vast culinary repertoire of blood-enriched dishes in its desi kitchens. I will never forget the mixture of emotions I went through when I saw a freshly slaughtered pig for the first time in Goa. My aunts rushed to collect the blood spewing from the animal’s jugular into a hollowed coconut shell, stirring the red liquid to prevent it from coagulating. The blood would later be used in the Portuguese-influenced, festive pork dish called sorpotel. As if the Kashmiri chilli’s crimson hue isn’t enough, pig’s blood is added towards the end to impart a bright red blush to this thick stew made of tiny bits of fatty pork and pig’s liver swimming in a vinegar-spiked gravy that is served with crusty brun pao.

Though it uses chicken as the main protein, another blood-based, Portuguese-influenced Goan dish is cabidela de galinha. Made very differently from sorpotel, this dish is a sort of mild stew-meets-risotto that uses a generous amount of basmati rice in its preparation. As my travels and work stints took me south, to the Indian peninsula, I discovered that both the Madurai and Kongu Nadu regions of Tamil Nadu share another blood-centric dish — the aattu ratha poriyal. This stir-fry uses the congealed blood of a goat, which is steamed and cut into small bits that are added to spices like turmeric, ginger, garlic, chilli powder, mustard and stir-fried in oil with onions and fresh grated coconut with plenty of curry leaves thrown in.

Interestingly, I learned that quite a few of the blood-enhanced dishes of India’s northeast are festive ones made with great pomp and ceremony. Take the sacred dish of amin, for instance, made by the Galo tribal people of Arunachal Pradesh from the blood of a sacrificial mithun (a semi-domesticated hybrid ox) on the fourth (and last) day of the Mopin Festival of Fertility, celebrated in April every year.

Similarly, India’s indigenous Nepalese, who mainly live in Assam, Manipur, Meghalaya, Sikkim and Darjeeling, also have a ritualistic spicy goat blood dish called rakti that is had during the Hindu festival of Dashain (Dussehra) and cooked in mustard oil over a slow fire. Still in the northeast, the Khasis from the Cherrapunjee area of Meghalaya also known as Sohra, make a pork pulao called ja-doh that uses pig and sometimes chicken blood. The dish is typically eaten at breakfast during Christmas and Easter. Once again, serendipity comes to the fore when I discover, while researching this piece, of all things a dessert, made with blood. Apparently, in Italy, sanguinaccio dolce is a pudding made with pig’s blood, chocolate, sugar, pine nuts, raisins and milk. I know where I am heading next when the pandemic departs! salt and pepper to taste

1. Mix the vinegar with the pig’s blood and set aside.

2. In a large pan heat oil and fry the minced onion and garlic.

3. Add the chicken pieces and let them braise for about 15 minutes or until golden brown.

5. When the broth has reduced a little, add water to the pan and then the rice. Cover and let simmer until the rice is just about done.

6. Add the blood and vinegar mixture to the pan, stir, cover again and let cook for an additional 2-5 minutes.

7. Remove from the pan and serve with a little sprinkle of coriander leaves.