Bee keepers to the rescue Second, a glut in the Palakkad mango market provided Horticorp, the nodal agency in bee keeping and development in Kerala, luscious mangoes and ample time to experiment.

The results? Honey-dried mango, for starters. “Honey is hygroscopic, it absorbs water. We immersed mango slices in honey and, in a matter of days, the fruit tightened. It was extracted as preserved, and dried. This has no sugar, no preservative and needs no heating,” says agricultural engineer B Sunil, regional manager, Bee Keeping Centre, Horticorp, Mavelikkara. Heproduced honey-dried jackfruit last December.

In Kerala, the cottage industry of bee-keeping unofficially produces nearly five to 10 lakh kilograms of honey annually and engages farmers, semi-farmers and students. Rubber and forest honey are the two main types of found here. “It is a source of secondary income and we find many youngsters taking to it,” says Sunil, adding that the new generation of bee keepers are full of ideas on popularising the produce. Twenty-eight-year-old Anoop Baby Sam from Chittar took over his father’s 15-year-old bee-keeping business with a wish to modernise and make it lucrative. He used the lockdown to work on beeswax cream, lotions, lip balm and candles. Using honey as base, he created a range of drinks like honey ginger, honey garlic, bird’s-eye chilli honey and basil pepper honey. Out of all his lockdown recipes, Anoop, who retails his products under the brand Nilackal Bee Garden, is most excited about his honey peanut butter cookies and honey payasam. “I tried many products during this time, including a carrot honey face pack,” says Anoop, who is an organiser with the Federation of Indigenous Apiculturists (FIA) and the District Secretary of Patanamthitta Bee Keepers.

Two things were in his favour. One, he lives near a forest that provides him with a “bee-keeping ecosystem.” Second, it does not require full-time engagement and could be pursued along with his job. “There are many bee species in Kerala, of which only five store honey and only three are good for farming: stingless, Apis cerana indica and Italian bees,” says Anoop, who uses social media to retail his products and posts videos about bee keeping.

Biju Joseph, a breeder from Pala in Kottayam district, is lucky as all his 80 sites, with over 1,000 colonies, are close to his home. He could harvest the honey despite the lockdown; the rubber trader breeds Apis cerana indica and supplies it to farmers across Kerala. “In bee keeping, there is seasonal management. I retail a colony (a box with six frames) for ₹1,000. There’s no age limit and there’s no requirement of land. It can be done on rented sites,” says Biju, who produces 6,000 kilos of honey every season.

The lockdown has also had a negative effect: it prevented migratory bee keepers from harvesting honey from colonies in different parts of the State. Aleyamma Siby from Panathady Panchayat, Kasaragod district, was unable to travel across the border into Coorg, Karnataka, where a few colonies would have produced one of the country’s finest honeys.

A Horticorp-recognised bee trader, Aleyamma has been selling honey and related products such as jams, fruit-infused honey and beeswax, under her label Matha Honey and Bee Farm Industries. She also supplies bee colonies. While rubber trees are the main source of nectar in Kerala, in Coorg, she places her hives in the forest. She rears Italian bees, which feed on sunflower honey from nearby sunflower farms in Karnataka. 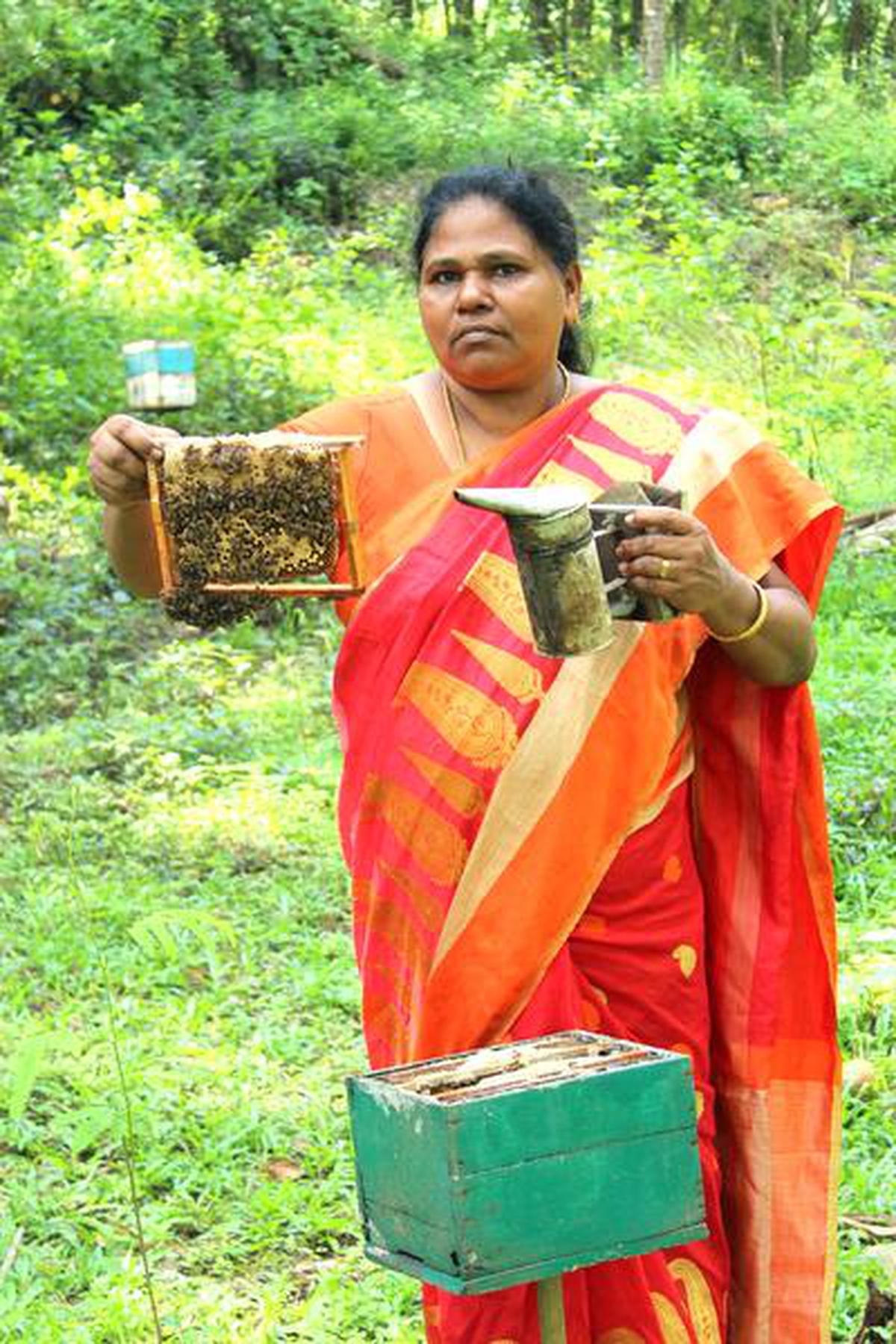 The typical season in Kerala is from January to March, and begins in Karnataka as this comes to an end. In the last season, from over 3,000 colonies, Aleyamma harvested about 25 tonnes of honey. Being a migratory bee keeper, she relocates some colonies to Karnataka to take advantage of the season. Aleyamma says the Coorg honey, which she sells for about ₹400 a litre, has a unique aroma and is delicious. “If the honey chambers are left unattended, production will go down,” she worries.