As lockdowns brought the focus back to home pantries, entrepreneurs began upgrading familiar staples to make it easier to put together quick, tasty meals

“I am a very bad cook,” laughs Samta Rohira disarmingly. Fortunately, for the many fans of her soybean and chickpea tempeh, that did not deter her from experimenting to find ways to make and supply the nutrient-dense, fermented food in Chennai. Sought for its unique flavour, tempeh is tough to find in the city since it is relatively unfamiliar. However, this savoury alternative to meat, a traditional staple in Indonesia, is getting increasingly popular especially with vegans and vegetarians.

“My mom was born in Surabaya, so we travel to Indonesia every year,” says Samta. “We used to spend our summer holidays there, for two months a year when I was growing up.” Her family was based in Chennai, where she grew up before moving to Jakarta to work for five years after graduating from Ethiraj College for Women. “Then I got married and landed back in Chennai,” she says.

Once the lockdowns began, she began to miss Indonesian food. “I could not travel this year. I began to wonder, ‘how can I bring my staple food to the city?’” The experiments began in March, and she was ready to launch by September. “I have to follow certain processes to adjust to the temperature here,” she says, adding that she makes tempeh twice a week, and each batch takes about three days. “Whatever I make gets sold out.”

To make meal planning easier, she also makes a chilli garlic sambal. “People buy both together — so you can put together a meal in minutes,” says Samta, adding, “I eat like this all the time: steamed rice, sambal, pan fried tempeh and veggies on the side.”

Roshan Thadani understands the importance of high quality staples. While COVID-19 triggered the rise of cloud kitchens with elaborate menus, encouraging customers to order indulgent meals, he launched with a jar of mayonnaise.

After graduating with a degree in Hotel Management, Roshan worked with The Bombay Canteen and city-based Writer’s Cafe, learning the nuances of being both a line cook as well as a restaurant manager. When the lockdowns began, he started to work on creating a whole egg mayonnaise made with no added preservatives, thickeners, emulsifiers, flavourings or colour. 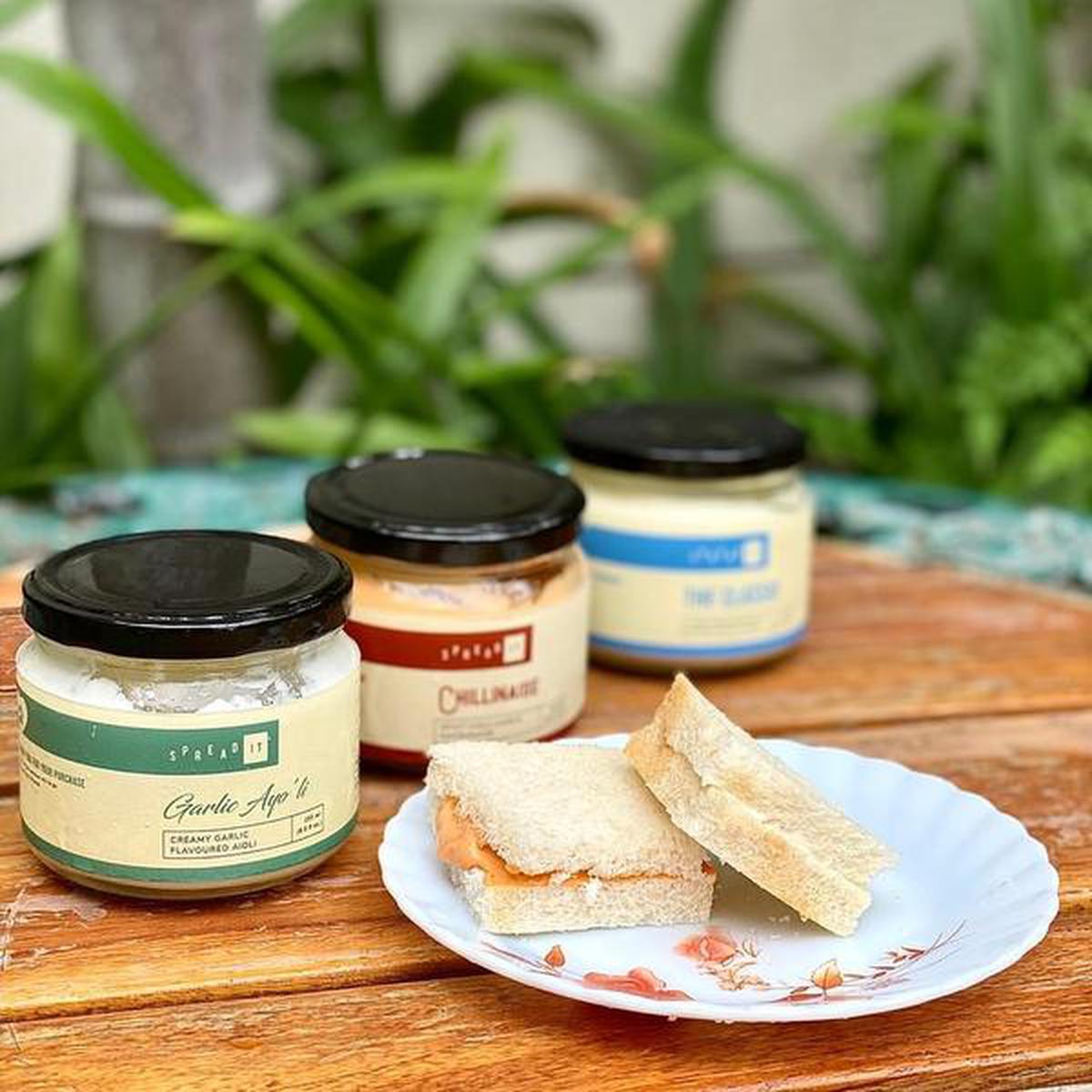 With a satisfying homemade flavour, the classic (made with mustard, vinegar and olive oil) is well balanced, with the acidity of the vinegar cutting through its creamy richness. There is a Chillinaise, its colour and flavours deepened with freshly made chilli garlic sauce. And a compellingly garlicky aioli, his most popular blend.

While homemade mayonnaise has a much shorter shelf life than the store-bought versions (Roshan suggests you consume it in 15 days), it has an appealing clarity of flavour unmuddied by the clutch of preservatives that go into mass produced jars. The classic works well with salads: quickly chop onions, cucumbers and tomatoes, then swathe them in a large dollop of it. The chilli version adds a kick to sandwiches.

And you are quite likely to find yourself shamefacedly working your way through the aioli, armed with just a bag of crisps, and a spoon.

However, with the ongoing pandemic, Ricky’s Cookie — like many other businesses — floundered. “I was all set to open a cafe space. Thank goodness we did not do it,” says Karthikeyan, who quit his job as a systems engineer at TCS (Tata Consultancy Services) to follow his dream, and join Ferrandi, a culinary school in Paris. After a year at school, he did a string of internships at prestigious French restaurants, including Chef Alain Passard’s influential L’Arpège. 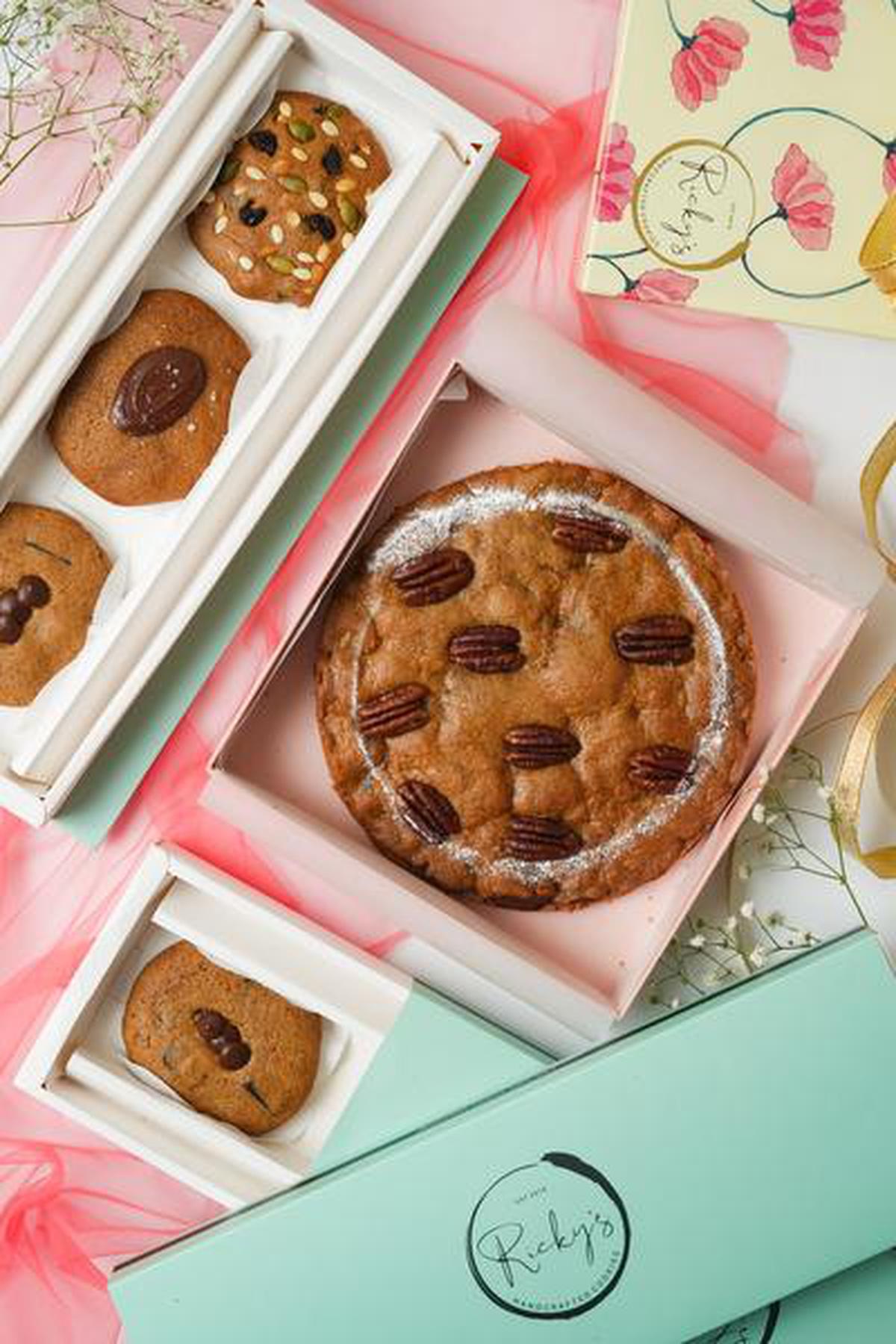 As the festive season approaches, Karthikeyan is determined to inject an air of celebration into what has been a grim year. And he is doing it with an indulgent super-sized cookie.

With a diameter of seven inches, the cookie is chunky with dark chocolate from Auroville’s Mason and Co. (Mason and Co. executes every step, from bean to bar, resulting in a product that has personality and terroir-influenced nuances.) The cookies, studded with roasted pecans, are rich and buttery, but not overwhelmingly sweet.

“We did not want to call it a monster cookie, which is a popular term for this size in America,” says Karthikeyan. “We wanted it to be a gift. A way to cheer someone up. So we call it our celebration cookie.”

Back in the game: Hyderabad’s restaurants welcome customers

Biryani Macha to The Void: Why Chennai’s chefs lean on simple yet familiar foods

Biryani Macha to The Void: Why Chennai’s chefs lean on simple yet familiar foods