Chennai’s street food ventures are remarkably resilient during the pandemic

There is no stopping Chennai’s small food ventures: from Sundari akka’s Marina beach fish fry to Mylapore’s Jannal bajji shop. Despite months of lockdowns, and all the challenges associated with COVID-19, they are busy again. We join the queue

Sometimes, you crave a samosa and you just have to eat it. No matter what.

During the initial months of lockdown, the thought struck Balakrishnan Yadav, who runs Bombay Lassi on Ellis Road. He drove to a distant store to buy a samosa for ₹35.

As restrictions were eased, his regular customers began to call him, asking when he planned to reopen. When he did, they gradually returned. Today, Balakrishnan is glad that both branches of his shop, specialising in samosas, carrot halwa, kachori, and jalebi, are back on their feet.

Several of the city’s most iconic street-food ventures seem to be doing well despite recurring lockdowns. Even as giants in the business struggle to keep their kitchens running, the small street vendors seem to be remarkably resilient.

Who yearns for rose milk from a corner store during a pandemic? A lot of people in Chennai, judging by Kalathy’s business over these past few weeks. The rose milk served in the store, which is over 90 years old, is synonymous with Mylapore; so much so that people have been asking for it all through the lockdown. 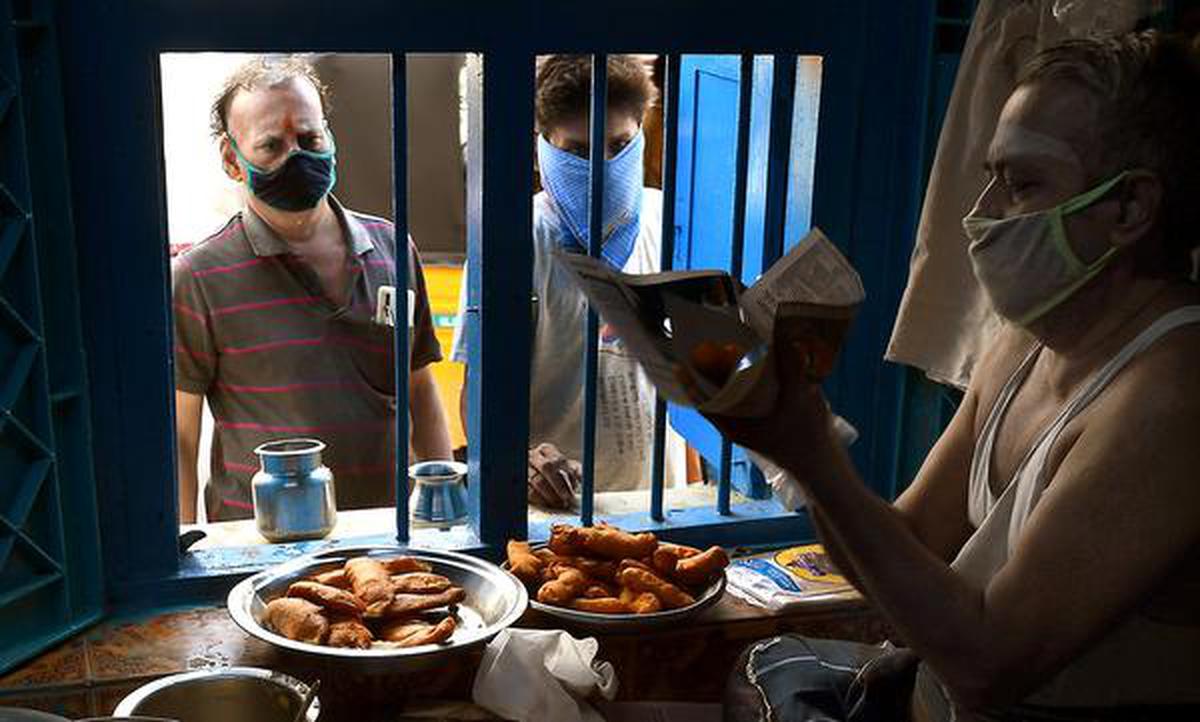 “We’re doing quite well,” says K Mani, who is from the third generation of the founding family. “People continue to come for our rose milk, especially from 11 am to noon and 4 pm to 7 pm.” He adds: “If there’s a dip is sales, it is due to cold weather and rains; not the pandemic.”

Jannal Bajji shop on Ponnambala Vathiyar Street in Mylapore, is functioning with renewed vigour. The outlet, that functions out of the window of an 80-year-old house, was closed for 40 days when Sivaramakrishnan, the founder’s brother passed away due to COVID-19.

Defying all odds, they reopened earlier this month, and the famed window even has a fresh coat of blue paint. In pre-pandemic days, for many in Chennai, a visit to the bajji shop was mandatory if we even stepped in the direction of Mylapore. The ritual continues.

K Sargunanathan, the brother-in-law of the founder, says the eatery continues to serve its signature soft idlis, ghee pongal, crisp vadas and translucent pooris, not to mention their sought-after onion chutney. The beaches may still be deserted, but there is no stopping Sundari ‘akka’, whose stall was always packed with customers at the Marina. She is now working out of her home kitchen at Lock Nagar, Chepauk. “Before Corona, I went in an auto to Kasimedu to buy fish every morning; now I go with my son on his bike; that’s the only difference,” laughs Sundari. “I now cook smaller quantities; that too only on order-basis.”

Customers call her to place their order the previous day. Her menu is simple: fish curry, fish fry, prawns fry, squid fry, rasam, and rice. “I use fish that is available fresh: today, I’m making paarai curry,” she explains over phone, her voice coming in snatches owing to her stirring the simmering curry in between. “I’m getting a call. It might be a customer,” she signs off.

Guru Mess’s mutton and chicken biryani are now selling out fast, thanks to people driving past the restaurant on ECR.

Located in Mamallapuram and known for Chettinad-style food cooked on wood-fired stoves, the restaurant initially suffered a setback since most of their customers are tourists, according to K Pandian, the proprietor. But things are looking up now.

C Kunhiraman General Stores in Royapuram too, is “limping back to normalcy”, according to Akilesh Baskaran, one of the managing partners of the shop that makes legendary mango ice-cream.

Food blogger Shabnam Kamil has been documenting her experiences with these food ventures on her Facebook and Instagram account, Mytrystwithfood. She admits that it did take a lot of deliberation on her part to step out of home, at first.

She went to Gopaul Dairy at George Town, known for its bun-butter-jam. And then to Thanjavur Military Hotel, Park Town. Then Kunhiraman’s. Then Sundari akka’s. Every where she went, she saw long queues.

“People are going to places they were always loyal to; that they trust,” she says. And in a smaller joint like these, Shabnam feels there is a sense of confidence as one can see the food being prepared right in front of them.

Restaurants have also upped their game. “Kattayan (Thanjavur Military Hotel) is over 100 years old; the owner formed a WhatsApp group, which he updates with food photos and even short videos from the kitchen,” she says. Who can resist piping hot mutton pulao?” Finally, Shabnam drove to Kattayan to collect her order.

She has more places on her list. “People are willing to visit most of them,” she says. “Initially, I thought I was the crazy kind,” she laughs. “Looks like I’m not alone.”

(With inputs by Chitradeepa Anantharam)

This is the fourth in a seven-part series on Chennai and its people, in lockdown, celebrating 381 years of resilience.

Have you tried these artisan coffee brews from Chennai?

A virtual food tour – The Hindu

A virtual food tour - The Hindu