COVID-19: Kochi cafe’s box of kindness at sunset for the hungry

Every evening since the holy month of Ramzan began, about 250 Iftar boxes head out to homes in Palluruthy near Fort Kochi, for people hit by the COVID-19 lockdown. The parcel includes a fruit, dates and a snack — samosa, unakaya or spring roll. It is part of a meal service that has been run by a city restaurant ever since the lockdown.

Although the lockdown has been eased in Kochi, the service continues unabated.

Samovar Chayapeedika, a cafe in Palluruthy, which opened its doors barely two weeks before the lockdown, is behind these generous meals. Samovar is advertisement filmmaker Nasim PA and business partner Siju P Najeeb’s foray into the hospitality industry. The initiative has been running for the past 45 days and counting.

“Everything was in place, our employees and supplies. We had just started business when this crisis struck,” says Nasim. With stock on their hands, and willing employees, the partners originally decided to donate food for a week or for as long as their stocks lasted.

But, they are yet to run out of food.

“We didn’t expect it to last this long,” Nasim confesses. “As we went along and people heard of what we were doing, we started getting donations in kind — vegetables, onion, flour — which helped since the entire burden was not entirely on us. Financially, this is not easy.”

Now Nasim and Siju put together 500 parcels of food (including the Iftar boxes) everyday. “During the lockdown we delivered the same number. We give both Iftar boxes and the food parcels to those who are fasting,” Nasim says. With the easing of the lockdown, the restaurant is open for deliveries.

Need of the hour

Until two weeks ago, Nasim’s employees were working without wages, “They said they did not want their salaries. In fact, four days into the lockdown, on March 30, when we decided to start the donations they said they would stay back and work. That meant a lot to us. And their gesture is admirable especially given the bad press guest workers have been getting lately,” he says. (Kerala uses the term guest workers instead of migrant labour.) 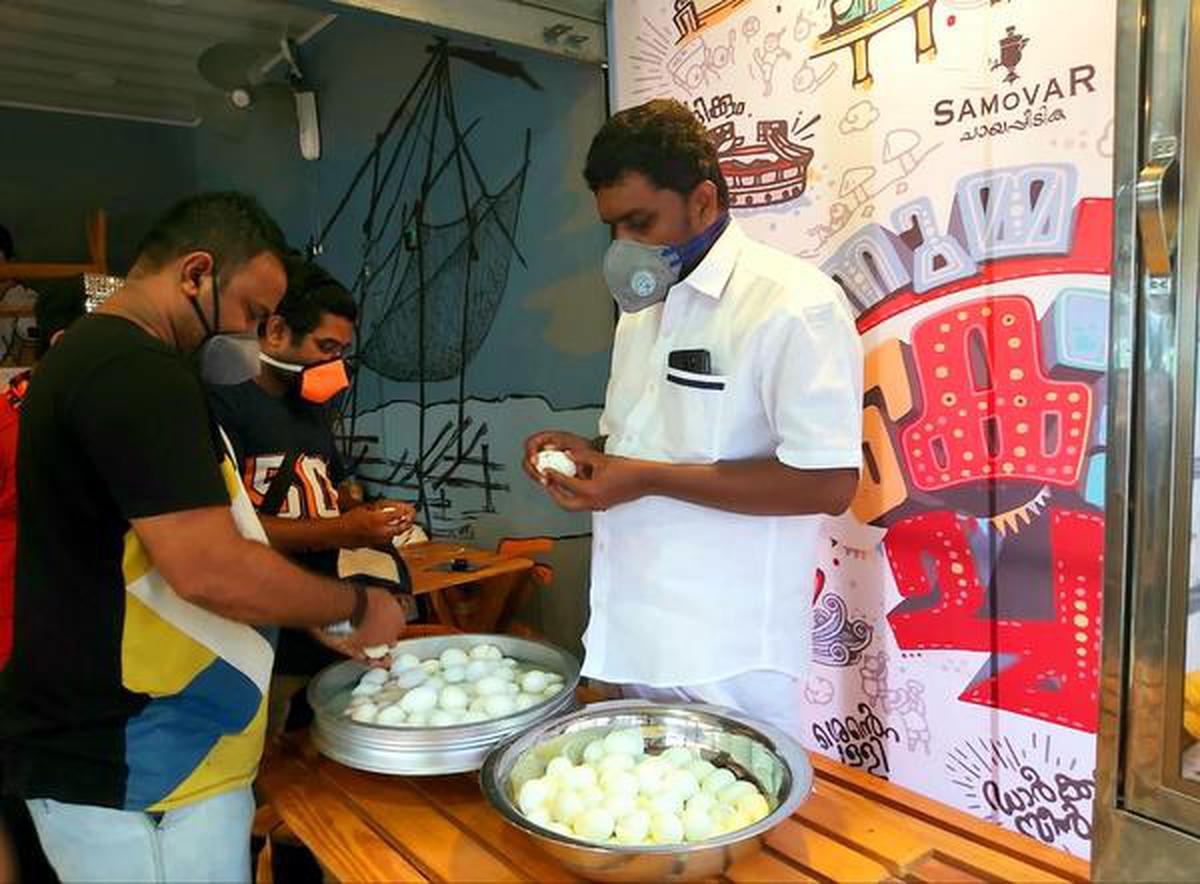 To keep the initiative running, volunteers offered to help by making the daily deliveries to those who could not come and collect food.

As most community kitchens and donations tend to focus more on daytime meals, usually lunch, Nasim and Siju decided to provide dinner. “There are many people whose basic need for food goes unmet. The bedridden due to diseases or old age, seniors who live alone and those whose livelihoods have been affected… There are more hungry people than we can imagine,” Nasim adds. The food parcels usually contain meals like chapathi with chicken curry or appam with egg curry.

During Ramzan, the Iftar kit was added, an idea mooted by I AM (Indian Adfilm Makers), an association of ad filmmakers, of which Nasim is a part. “I had spoken to I AM about this and they immediately agreed. They began chipping in with contributions and donations.” The daily parcel of food delivered after sunset is something that people now look forward to.

I AM joint secretary Sleeba Varghese says, “Many community kitchens, run by various organisations, shut by the first extension (till May 3). Nasim approached us as he didn’t want to stop before the lockdown was lifted. We decided to support him: as an organisation and individually too. We will take it to its logical conclusion — the end of the lockdown.” Nasim concurs. “We will keep going till May 17, or at least that’s the plan for now.”

Explaining why they kept going, despite the challenges, he says, “Once you see what this packet of food means to the people who eagerly wait for it, it will change you forever. I have seen little children and the aged wait for this: we just could not bring ourselves to stop.”