Esther David collaborates with Indian Jewish communities to record recipes for ‘Bene Appétit: The Cuisine of the Indian Jews’

Author Esther David travels across India, collaborating with Jewish communities to learn how to cook traditional, closely guarded recipes for her new book, ‘Bene Appétit: The Cuisine of the Indian Jews’

“Zoo life was very cosmopolitan. I grew up with Gujarati friends. And the realisation of being Jewish. So I was really inhabiting three worlds,” says author Esther David, over a call from Ahmedabad.

Her latest book, Bene Appétit: The Cuisine of the Indian Jews, published by HarperCollins, opens with the lines “Food is memory. Food is culture. Food bonds families and communities.” Hence, in the face of a rapidly fading collective memory of the Indian Jewish experience, Esther decided it was time to travel across the country to record their traditions. In the process, she uncovered closely guarded recipes for dishes such as chik-cha-halva, jumping potatoes, agar agar jelly and even a Jewish biryani.

But you are still thinking about the zoo, aren’t you? Esther’s unconventional childhood was thanks to her father Reuben David, a self-taught veterinarian and influential conservationist who created the Kankaria Zoo in Ahmedabad and was awarded the Padma Shri in 1975. 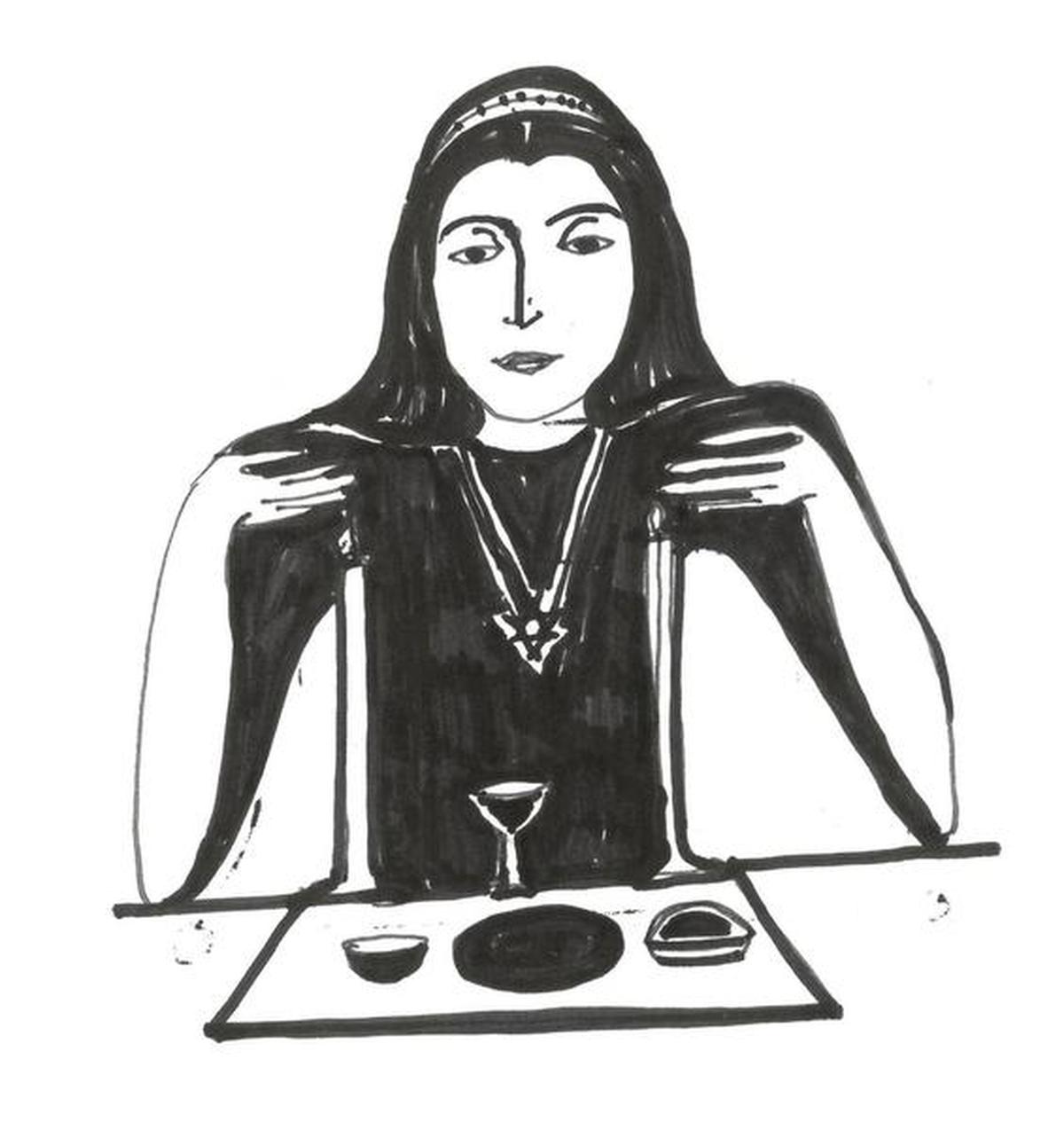 An illustration from the book
| Photo Credit:
Esther David

“My father decided that religion was not really necessary. So yes, we were told we were Jews. But there was no orthodoxy,” she says, explaining that she imbibed the idea of being a Bene Israel Jew in “bits and pieces”. She adds, “A lot was forgotten. But relatives would come from Israel. Jewish friends would arrive with chick-cha-halwa a fudgy, labour intensive sweet made with whole wheat, coconut milk, nuts and raisins. I would come across a prayer book in Marathi, Hebrew and English… All this made me think about what it meant to be Jewish.

They form five main communities: The Bene Israel Jews of Western India, the Cochin Jews of Kerala, the Baghdadi Jews of Kolkata, the Bene Ephraim Jews of Andhra Pradesh, and the Bene Menashe Jews of Manipur and Mizoram.

“All these communities found ways to adapt local recipes and ingredients, in keeping with our dietary laws. Meat must be kosher and you cannot eat it with dairy — so you cannot even put ghee on a chappati,” says Esther.

To record the recipes from each community, Esther travelled to synagogues and Jewish homes across the country, starting with Machilipatnam, Andhra Pradesh.

“Everywhere people were really wonderful. There is a fraternity, a family feeling. They were not only happy to cook these recipes for me, but also to translate and write them down.”

While most of the recipes are simple, with tweaks, like using coconut milk instead of dairy in keeping with Jewish dietary laws, the collection is also a fascinating account of a diaspora that blended into India harmoniously, yet managed to retain a unique identity. 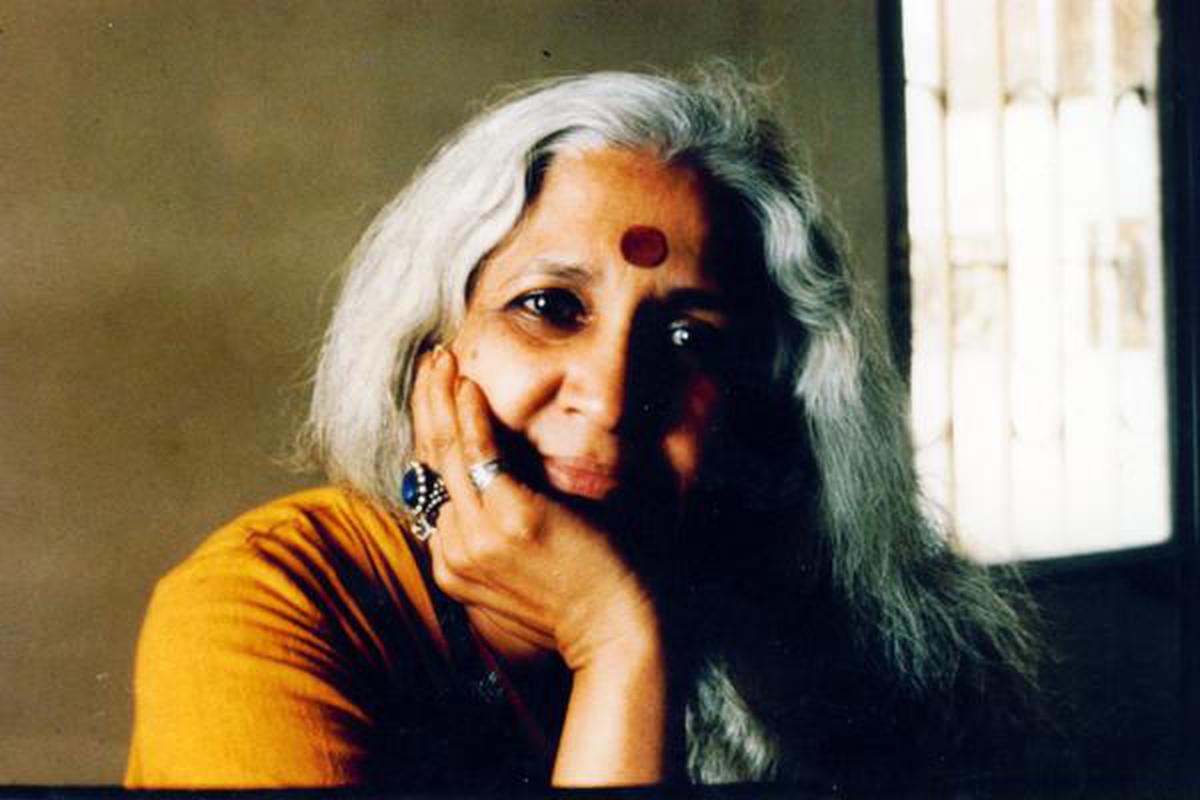 “In India, it it difficult to find kosher meat, so many Jews here are vegetarian. When we have the fast of Yom Kippur, we break it with grape sherbet and sweet puris in Gujarat. In Kerala, they eat rose cookies, or achappam. The law is it has to be something sweet and salty: and both fit exactly,” says Esther, explaining how local curries, snacks and sweets have been adapted.

“The community has been very observant, and adapted what is most authentic and closest to the dietary law,” she says, adding, “So for Shabbath (Judaism’s day), if you can’t make bread, make chappatis. Of you don’t want to do that, appams are fine. Everywhere I went I noticed they found a balance between dietary laws and the regional culinary influence.”

Though many Indian Jews have moved to Israel, Esther says they continue to cook the food they grew up eating. “South of Israel, it is like little India in the kibbutz: the food, the language, the songs… Every year, they all make it a point to come to India for the festivals like Yom Kippur. If there is a wedding, they come….”

As she recorded recipes, Esther was fascinated to find some that spanned the world. Kanavali, or Shabbath cake, is made by the Bene Israel Jews with roasted semolina, jaggery and coconut milk. The Cochin Jews make a version with grated coconut, eggs and cardamom. “I found some version of this all over the world,” she says, adding that she traded recipes at Jewish conferences in Israel, France and London.

Confessing that she does not consider herself a great cook, (“I am too impatient,”) Esther still worked her way though the recipes in the book, with help. “Chick-cha-halwa is very difficult. You start at 5am and end at midnight,” she says. “Now there are shortcuts, but that is a another reason I thought I need to document the original recipes.”

A sculptor and artist, Esther also drew the charming illustrations that punctuate the book and brighten its cover. Winner of the Sahitya Akademi Award in 2010 for English Literature, her previous novels focus on the Jewish experience in India. 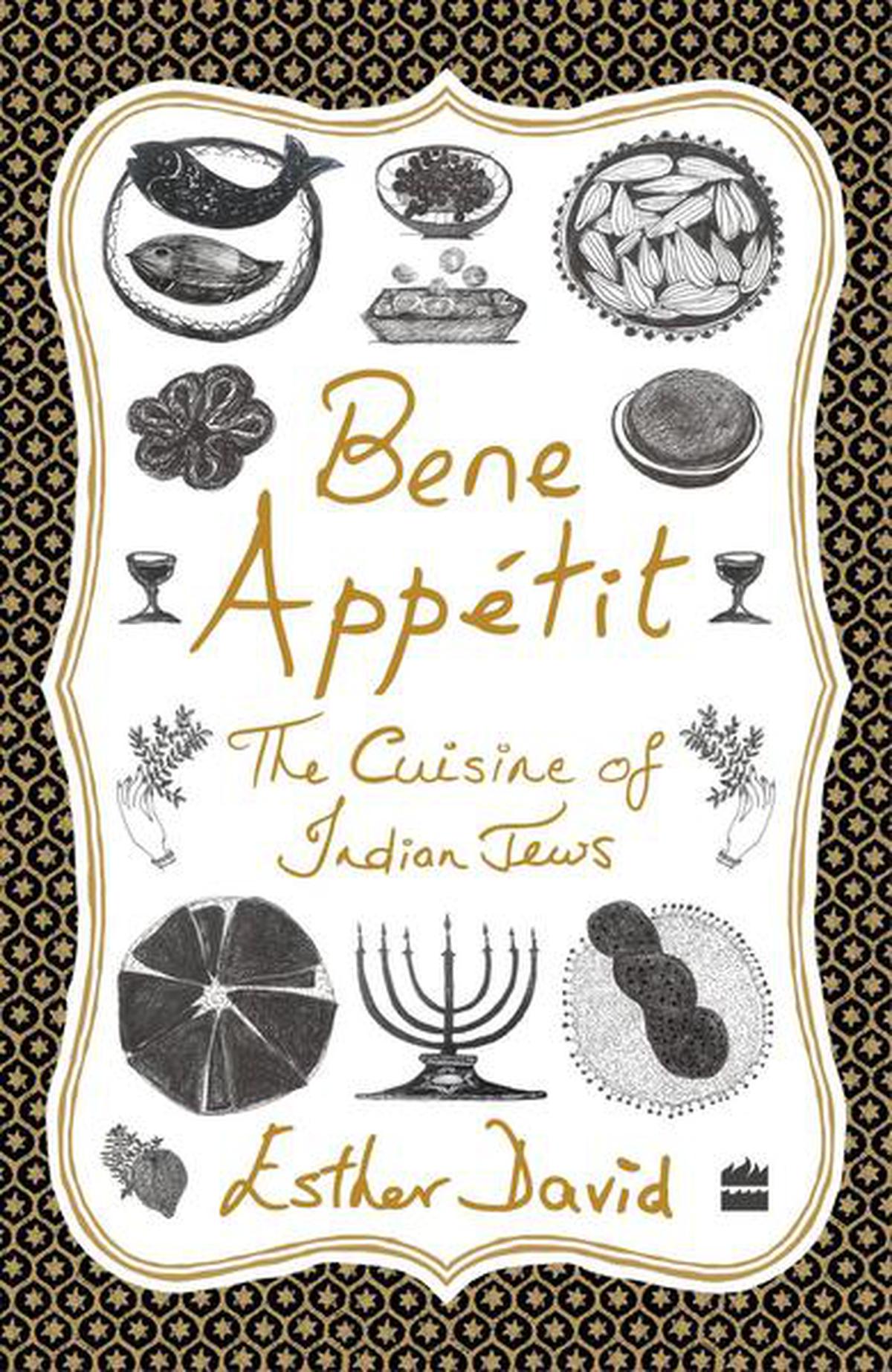 A book cover of ‘Bene Appétit: The Cuisine of the Indian Jews’
| Photo Credit:
Esther David

Explaining why she decided to plunge into food writing, she says, “My sources are beginning to forget some of the older recipes. Everyone is now into quick cooking and fusion…. Our tastebuds are forgetting our heritage.”

Esther’s Jewish roots combined with her unorthodox upbringing proved to be the ideal recipe for Bene Appétit, since research involved sitting down at many dining tables. “Though there are many rules, my father lived in the land of the tigers,” she laughs. “He was very particular that if someone invites you home, you should enjoy whatever they serve.”

Despite being a reluctant cook, along the way she too picked up memorable recipes from Indian Jewish kitchens. “I love the Bene menashe community’s black rice pudding, with chak-hao, nutmeg and cashewnuts, in Manipuar” she says. “And I am now famous for my Tilkut potatoes, tossed with spring onions and sesame seeds.”

Cook it under $1 with chef Shankar Krishnamurthy