A park, monuments, and food — everything that Delhi loves, has come together in Fabcafé by the Lake

Think of Delhi, and you picture parks or monuments. And when the parks come with the monuments, there is nothing quite like it! Sunder Nursery in the heart of the city, is a combination of both. Some of you may remember the time when it was merely a large government nursery, and keen gardeners went there for their seasonal saplings and seeds. It is now the most ‘happening’ place in Delhi, ever since the complex was renovated some years ago. In COVID-19 times, its open-air environment has also been especially welcoming.

Of course, in Delhi these days, if there is a picturesque spot, can food be far behind? Think of Mehrauli-Qutb and Hauz Khas Village. So, I wasn’t surprised when I heard that a restaurant had opened at the nursery. It is called Fabcafé by the Lake, and is a part of the Fabcafé chain. It has a seating arrangement in the open air to enable people to sit at a distance from one another.

The café at Sunder Nursery is indeed at a beautiful location. It is open from 8 am to 6 pm (Ph no: 7428899692) and has breakfast fare, snacks, regional dishes, and beverages on the menu. The menu, however, can do with some tweaks. A young friend, for instance, says she would have liked some finger food like sandwiches that are ideal for a picnic spot. Fabcafé outlets now deliver food (through their website fabcafe.menu and delivery services) and have a pick-up scheme, too. You order and a tray is prepared that you take away and eat at leisure. The food is packed in brown paper bags and comes on a biodegradable tray, along with disposable cutlery, mouth fresheners and tissue. I started with the salad — roasted sweet potato cubes, watermelon, organic salad greens and pumpkin seeds in a zesty citrus dressing (₹369). I love shakarkandi, and later thought I could have made a full meal out of the salad. I moved to a triangle of a paratha (₹120) that had been prepared with various kinds of seeds and wholewheat. It was wafer thin, had the aromatic flavour of ghee and went rather well with chicken tikka makhni (₹520) — juicy chicken pieces in a well flavoured butter-chicken-like sauce. The gravy was not too sweet, nor too tangy, and not heavy either.

The coastal chicken (₹540) consisted of tender pieces of chicken in a tasty, coconut-based sauce. What disappointed me was the chicken biryani (₹610 for 500g). It had been cooked with Basmati rice, and flavoured with desi ghee, saffron and kewra, but somehow the rice had not soaked in the flavours of the meat. The dessert — a deliciously soft almond-espresso cake — was vegan (as I learnt later), but I loved it: it was moist, full of nuts, and had a nicely coffee-bitter taste that I enjoyed. 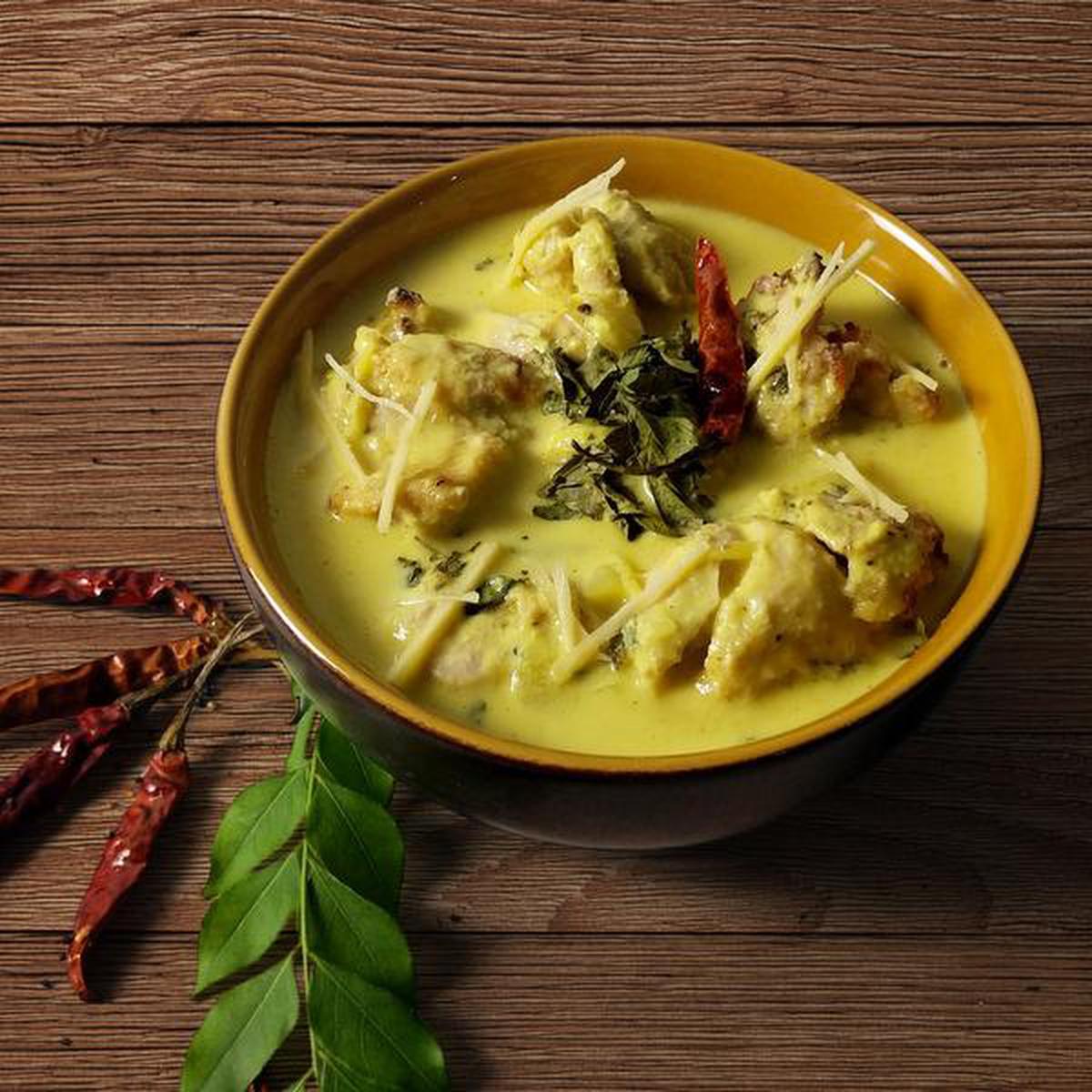 For my tea that evening, I had their baked samosas (₹200 for four). We are a samosa family, and I love all kinds — with potatoes in their skin, cauliflower florets, minced meat, dal, even kheer. This was baked, so I didn’t feel guilty about biting into it. The stuffing — chana dal, potatoes, green peas — was delicious, and the crust was seed-laced and nicely crisp. This came with three kinds of chutneys: a green coriander one, a tangy red sauce and a tomato-based one.

The pandemic has taught us that having a meal in the open air and in picturesque surroundings with good food can raise one’s spirits. What else can one ask for?

India’s places of worship and their different foods, all in one book