Wild honey, cambogia (kudampuli), wild turmeric, black dammer (kunthirikkam) and wild pepper, some of the forest produce sourced by tribal communities in Kerala, are much in demand for their purity and flavours. However, when Vanasree eco shops under the Forest and Wildlife department, which sell these forest products, had to down shutters due to COVID-19-induced lockdown, many of the outlets had tonnes of unsold stocks.

That’s when the eco shops launched a scheme to home-deliver these products by using social media platforms and WhatsApp groups. For instance, an outlet at Kodanad near Malayattoor in Ernakulam district had nearly 10 tonnes of wild honey and one tonne of kudampuli, sourced from 12 tribal settlements under the Malayattoor forest division, in stock when the lockdown came into force. The authorities took the decision to deliver the produce to consumers within a 60-kilometre radius of the eco shop. 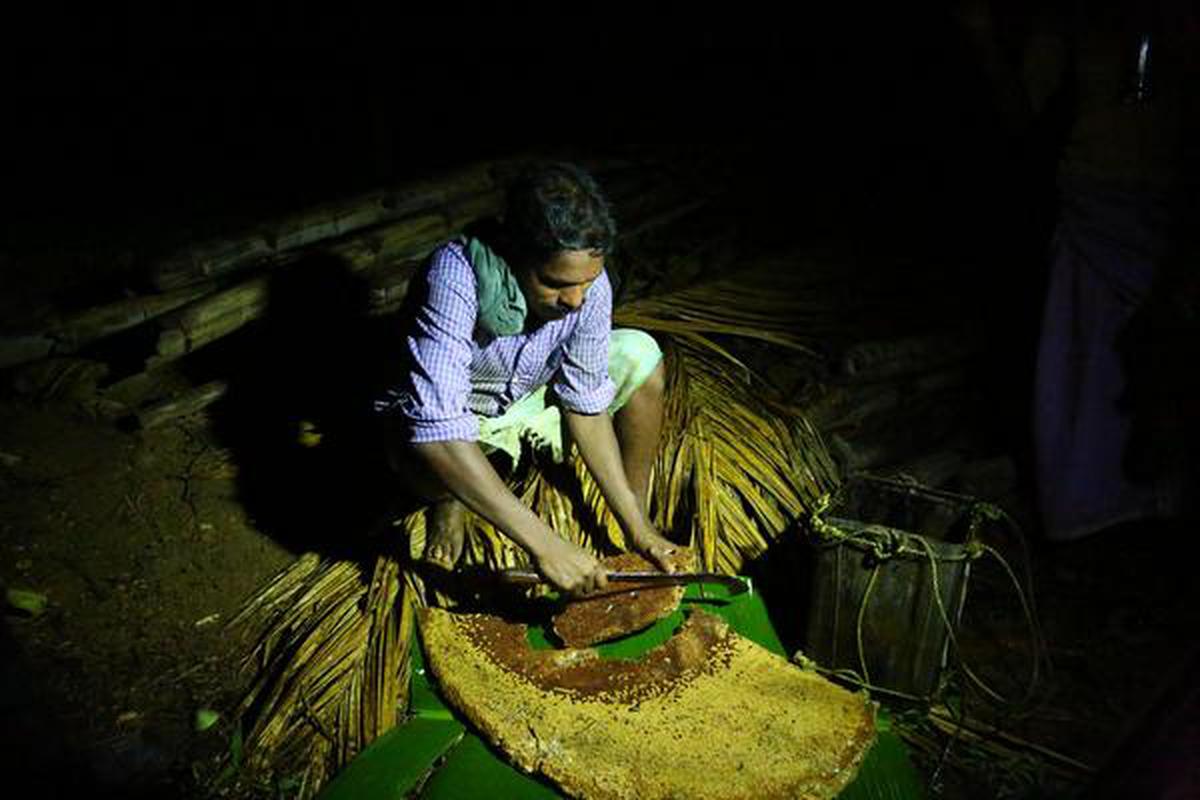 “We have also reopened our mobile unit selling honey, wild turmeric (kasturi manjal), kunthirikkam, herbal scrub (incha), kallurvanchi (a medicinal shrub) and wild pepper. The unit moves in and around Ernakulam district. Plans are afoot to supply honey in bulk quantities to residents’ associations,” says an official with the division.

While Vazhachal division with 1,800 kg of wild honey sold a substantial amount to residential associations in Kochi, Chalakkudy division with 7,000 kg of honey turned to WhatsApp to find buyers. 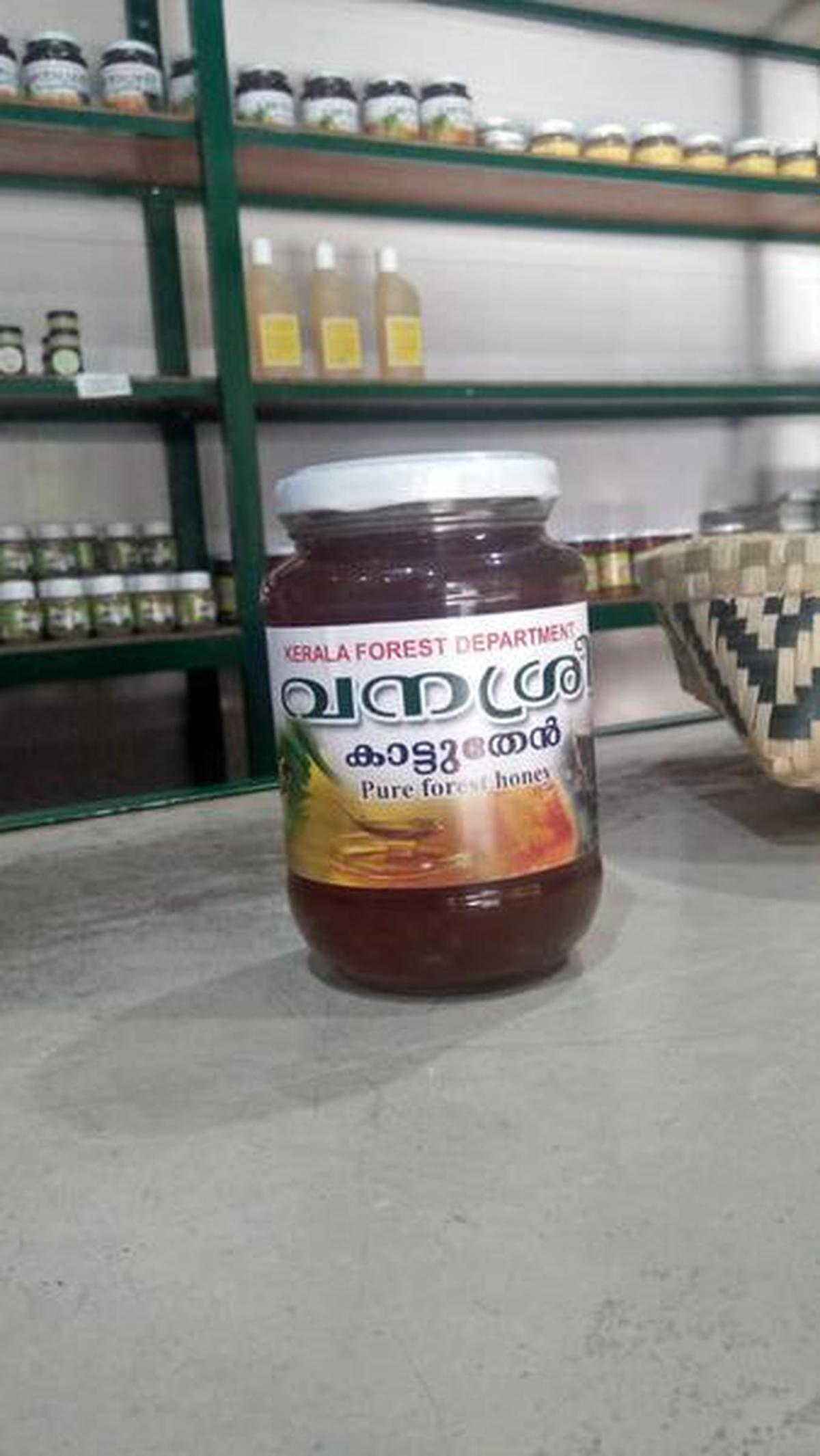 “Procured from five of the 12 tribal colonies under the division, the entire honey was bought by the department from the tribespeople as they were unable to find any local buyers. A WhatsApp message about the stock got noticed and 1,000 kg was collected by Horticorp [Kerala State Horticultural Products Development Corporation]. Another 100 kg was bought by a private firm,” says Praseetha EP of Vanasree eco shop at Chalakkudy in Thrissur district. The outlet also procures beeswax from the tribals that goes into making different kinds of balm, soap and moisturiser. “We have trained a few women from one of the tribal colonies to make these products,” she adds.

Maniyan, a member of Kani tribe, with the produce for sale at the ‘Kani chantha’ at Kottur
| Photo Credit:
Special arrangement

Under Vanika, a new initiative launched in Thiruvananthapuram, agricultural produce collected from the tribal communities were sold through a WhatsApp group. Products from 21 tribal settlements were collected by the forest officers. “Now ‘Kani chantha’ on Wednesdays and Saturdays are held on our office premises to auction the forest produce at reasonable rates,” says an officer with Kottur section of Agasthyavanam Biological Park.

Although not all forest divisions have been able to clear their stocks, they support the tribals by procuring the produce collected by them. “There are 99 tribal settlements of which 30 are into harvesting honey. That is their livelihood and it is our responsibility to support them. So we continue to collect honey even though we haven’t chalked out a plan to sell it. We are in talks with certain Ayurveda pharmacies,” says Aswathy VK, sociologist, Sultan Bathery Forest Development Agency, Wayanad Wildlife Division.

The division collected 15,000 kg of honey in the 2019-2020 financial year. “We have been giving training to small groups to make value-added products from honey. But that had to be stopped because of the pandemic,” she says.

Recently, Horticorp and the Agro-Industries Corporation launched ‘Achenkovil Honey’ to sell honey collected from forests in the Achencoil region in Kollam district. Meanwhile, the Forest Department is streamlining online sales of Vanasree products, which was launched last year.