The verandahs are alive with the sound of cutlery. Alfresco dining might not be a sparkly new trend but it certainly has found an ally in the pandemic.

After many months of scarfing down takeaway on their couches, people are reviving their social lives as restaurants reopen. However, with COVID-19 still a threat, outdoor spaces are in demand.

Bass & Soda, which launched in February this year, did brisk business before pulling its shutters down mid-March. The two-storeyed space spread across 6,500 square feet reopened this month after converting its outdoor smoking zone into a dining area. 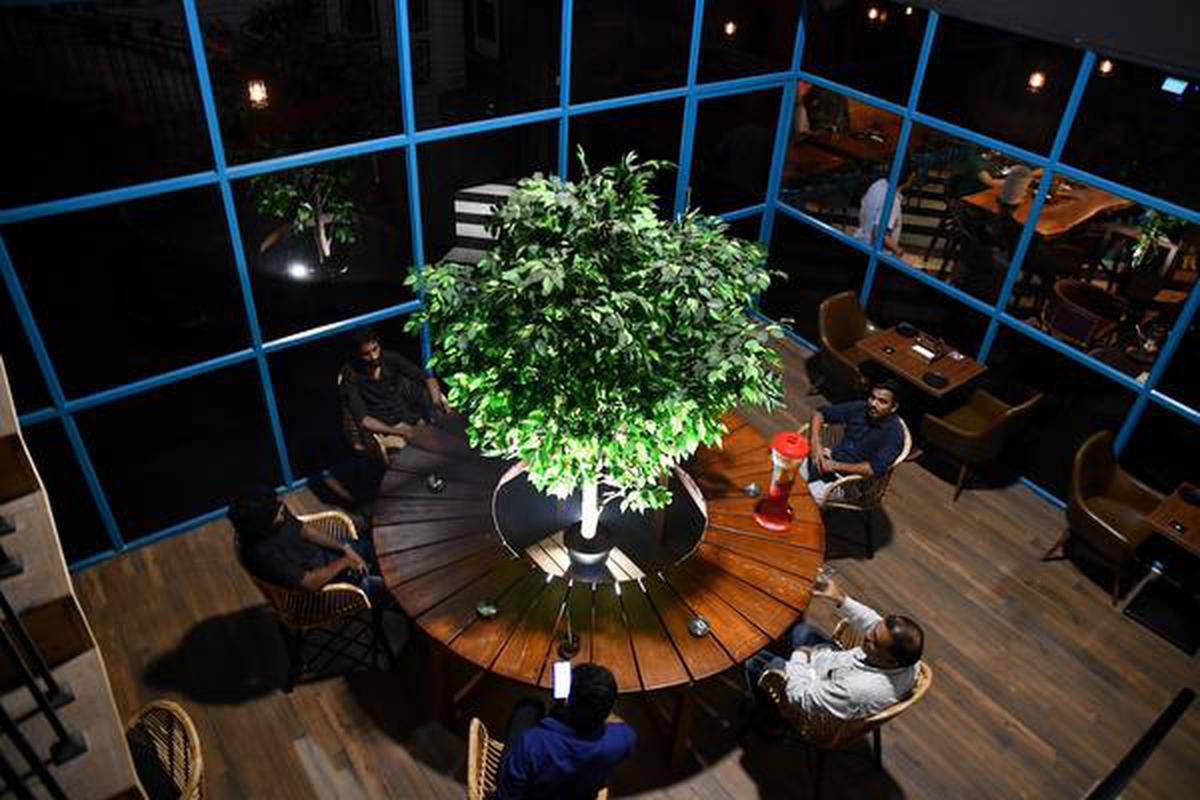 “We took an additional month to comply with the norms and work on our seating,” says S Naveen Chandra, founder of the resto-bar in Kottivakkam. The indoor area earlier seated 120 people, but this number is now evenly split across two levels. “We have made sure that each table has a five metre distance between chairs,” says Chandra.

Once the pandemic is under control, he plans to go back to the original seating arrangement. “People who call to book first enquire if we have made changes to the seating plan. When we tell them we can seat them outside they are pleased,” he adds. As Deepavali approaches, he plans to add another 60-seater roof top dining space to this unit, offering sweeping views of OMR.

Restaurants that have access to previously ignored open spaces are reworking them now. Furniture has been moved around, plants added to the decor and fans placed at regular intervals to battle humidity.

Given the challenges of operating in these now fluid spaces, menus have also shrunk by 50%. Naveen Howie, brand and hospitality consultant, says this is a trend across many restaurants. “Right now, most places have 30 to 40% occupancy. They are cutting down pricing overall on offers and dishes,” he says. Howie’s new venture Koramingle, in Bengaluru, was redesigned in April to make more room for al fresco dining. “It now has an outdoor garden, a frat house setting and another separate terrace which was initially the smoking zone,” says Howie, adding that the multi-level, 12,500 square feet space, which earlier accommodated 300 people, now — adhering to the new rules — seats around 140. He notes that around 85% of Koramingle’s patrons choose to sit outside.

“Every city has its own development rules,” says Anurag Katriar, president, NRAI (National Restaurants Association of India) and executive director and CEO of deGustibus Hospitality, which owns restaurants like Indigo, Indigo Deli, D:OH and Neel among others in Mumbai and Delhi. The NRAI is pushing for more open spaces.

“If you look at markets like Delhi, the task of using outdoor spaces was actively being discussed when the lockdown was on,” he says, explaining how the NRAI sent applications to the governments of Maharasthra, Delhi and West Bengal to allow open-air seating. “In Delhi, the SDMC (South Delhi Municipal Corporation) has permitted it,” he adds.

While work is underway to incorporate an open air section at Katriar’s Indigo Deli in Palladium Mall, Lower Parel, he says very few have the liberty of big, open spaces in Mumbai. Here, a restaurant has to take separate permission and pay an extra fee for an outdoor area. “In Mumbai, you have more high rises than flat spaces. That is why there are restrictions. Plus, there is the concern that people might misuse the area,” he says, adding “Laws governing the subject were made at a time before COVID-19.”

Though cities like Mumbai and Chennai have never really been big on outdoor dining thanks to the heat and humidity, Katriar feels, given the safety aspect, it will pick up. Fortunately, at this time of the year, the weather is more conducive to sitting outdoors, with some help from pedestal fans.

While the restaurant does save on air-conditioning bills, there are extra steps involved like those of handling mosquitoes, protecting the furniture placed outside and redoing the outdoor setting everyday.

Luxury hotels are also re-purposing their spaces to provide clients with the option of dining under the sky. The ITC Grand Chola has a bespoke dining experience featuring gazebos by the poolside. This started in early October, following queries from guests seeking a well-ventilated place with a serene environment to dine in. These gazebos can accommodate anywhere between two to 10 guests who can choose from Indian, Italian and Asian cuisine. 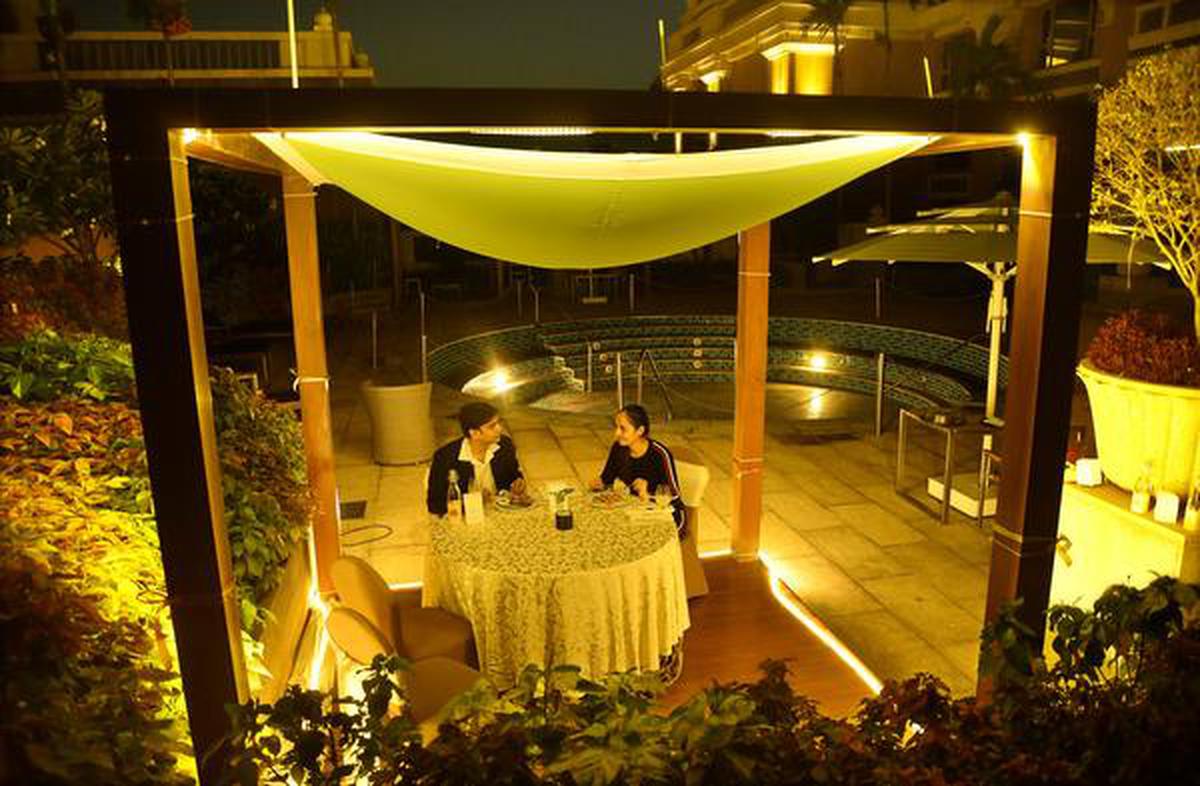 “As of now, guests dining here are small groups of four to six, including couples, and a combination of hotel residents and city guests,” says Zubin Songadwala — area manager, ITC Hotels South and general manager, ITC Grand Chola, Chennai. “While the age group of these guests is primarily between 25–50, we are also seeing an increase in the number of older guests too,” he adds.

In September, The Verandah at Taj Connemara in Chennai, started serving meals by their poolside and could accommodate 25 guests. This was done to create additional dining spaces while keeping up with the social distancing norms, says Saleem Yousuff, senior vice president, operations, South, IHCL.

Among its other properties, The Front Lawns at Savoy-IHCL SeleQtions, Udhagamandalam, has recently introduced Dining Under The Stars. The menu includes piping hot Anglo-Indian and local Badaga cuisines, and a crackling bonfire keeps the diners warm as the mercury dips.

“Alfresco dining has a charm of its own — open skies and views. All this, together with enjoyable food for company, is just the right way to relax with friends and family,” adds Yousuff.