Their typical weekday begins before daybreak; Kishore Konda and Sreedhar Rao Puvvada are up by 4 a.m. to visit their passion project, Prithvi Farms, at Bhuvanagiri, about 50 kilometres from Hyderabad. After overseeing the day-to-day tasks at the farm, they head to their workplace — Pramati Technologies. It hasn’t been easy fulfilling the commitments of their IT job as well as farming, but they are determined to give it their best. Since they began farming three summers ago, they have been cultivating heirloom rice, millets, pulses and native vegetables.

The farm grows Bahuroopi, Narayana Kamini, Navara, Kurakar and Ratnachodi rice varieties, pulses such as red, green and black grams and cowpea, and foxtail, kodo, finger and little millets. Sourcing seeds of native rice varieties may have been a challenge initially, but of late, the duo has given away seeds to other farmers who are interested in cultivating these rice varieties in about 200 acres of land. Colleagues-turned-friends Sreedhar and Kishore had been interested in farming over the last few years. They spent almost two years visiting farms in Telangana and Andhra Pradesh during weekends and talking to nearly 70 farmers. “A lot of people discouraged us, many others motivated us,” says Sreedhar.

While many corporates who took to farming in the last decade relied on ancestral land to give fruition to their farming dreams, Prithvi Farms began on a 11-acre plot of land, leased with pooled in savings: “Initially there were four of us, then two friends opted out. The first year was tough since we didn’t have any experience in farming,” Kishore concedes.

They plodded on with an interest in chemical-free farming, adopting the methods suggested by agriculturist Subhash Palekar. “Vijay Ram of SAVe (Social Advancement Ventures) Foundation, Hyderabad, has been a mentor and helped us with seed varieties,” mentions Kishore. 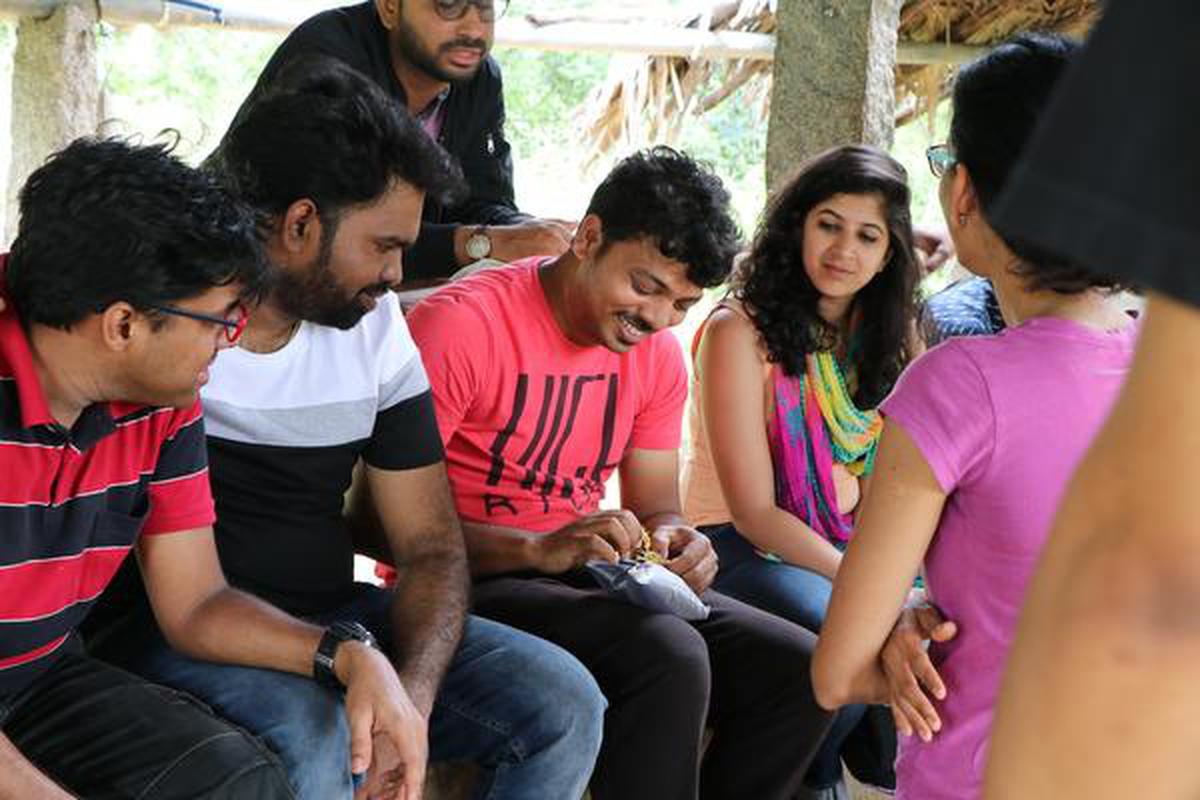 Kishore Konda (centre) with friends who visited the farm

They’ve also conducted farming events, inviting friends and extended family to have outings at the farm and take back hand-picked produce. In addition, they are associated with Shamanyu Global School, where they have conducted workshops on natural farming.

Word of mouth publicity has helped them find more takers for their produce. “There are more than 1000 employees in our company. Knowing that we do natural farming, colleagues showed interest in buying grains and vegetables harvested from our farm,” says Kishore. Sreedhar and Kishore are eager to support other farmers who are keen on chemical-free farming. “It’s hugely satisfying to educate others in natural farming methods that’s good for our health and the soil. So far 20 farmers have come forward to take up natural farming and we are happy to support them, from seeds to natural fertilizers, and helping in selling their produce where they are at liberty to fix the price. We want to help farmers who’ve moved away to take up odd jobs, return to farming and follow sustainable methods, and in turn convert as many acres as possible into fertile fields of local crops,” sums up Kishore.

A not-so-sweet battle: Mango vs banana