Huff, puff and crunch: The deep-fried magic of aralu sandige

Summer, my least favourite season, is winding to an end. Growing up in Hyderabad, it meant scorching hot days and sudden power cuts. However, the little house I grew up in was surrounded by greenery and had a small backyard open to the sky, where something I loved happened every summer. This was when my mother made aralu sandige, which is still my favourite vadam or fryums. Made with puffed paddy rice, sago, green chillies, salt and either onions or pumpkin, a heady aroma would fill the house as she started cooking the base porridge for the sandige.

As children, my sister and I would always eat some of the mushy gruel with utmost relish, and even break bits off the still-wet sandige when it was put out to dry. The unrelenting summer heat was conveniently forgotten in the excitement. The drying process took just a couple of days thanks to the bright sunlight, and then the sandiges made their way into the kitchen, to be deep-fried and land on our plates. The sight of the shrunken sandiges rising and expanding magically in the hot oil is still a vivid memory. There would be enough made to last a couple of months, and after that I would look forward to the next season’s ritual.

This became a rarer occurrence when we shifted to an apartment in Secunderabad where space was limited, but a few years later we moved to Bengaluru, where many traditional stores used to stock sandige. I found out that not all sandiges expand and that many were quite flat — and not as tasty either. That is when I discovered an old traditional store in Basavanagudi that made some of the better tasting sandiges, and that’s where I replenished my stock every summer. But I always felt that something was missing, and realised soon enough that it was the flavour and taste; of sandiges made at home years ago that still lingered in my mind.

Fast forward to the summer of 2020 and the lockdown left me with enough time on my hands to revisit some of my culinary roots. I decided to make aralu sandige at home. My first challenge was to source the ingredients, especially the aralu or puffed paddy rice. Concerned that the project would derail even before it started, it was my mother who told me that some of the alternatives could be puffed rice (the sort used to make bhel puri) or even the staple avalakki (the paper version as opposed to the hard version) that was available at home.

However, I decided to stick to the original recipe and was lucky enough to find cleaned and de-husked puffed paddy at a store very close to my house. Thrilled, I headed home, where my mother helped make the gruel using the sago and puffed paddy with a helping of onions and green chillies. And soon the wafting aroma reignited childhood days. Of course, I had to immediately taste the gruel, and it instantly connected with the taste I had been missing all this while. While the mix turned out fine, the issue was how to dry it. We put out the small batch to dry in the balcony. It took more than three days, and as I was rather concerned that it would not dry completely, I used the microwave as well (putting them in to dry after the pre-heated mode). Three days later, the sandiges were ready to be fried. Hesitantly, I lowered one into the hot oil — and, magically, it expanded and the crunch from the puffed paddy and sweetness of the browned onion transported me to culinary heaven. I’d rediscovered that I could make what I loved after all, even if it did mean bending over backwards a bit. 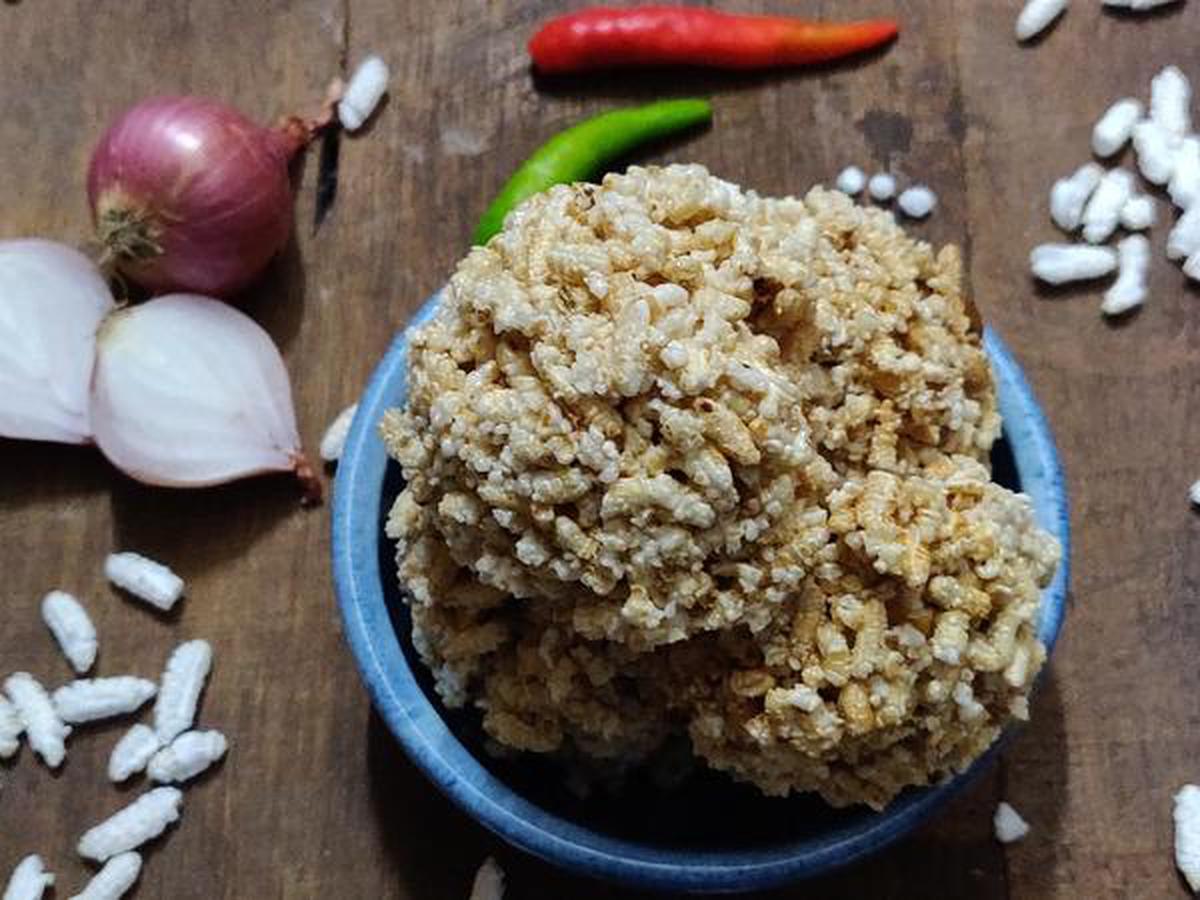 1. Wash the puffed paddy rice and squeeze out the excess water, ensuring no husk is present.

2. Finely chop onions and green chillies. You can also use finely chopped white pumpkin instead of onions. Add this to the popped rice mix. Add salt.

3. Wash the sago pearls and boil with water till it gets a gruel-like form.

4. Now pour the gruel into the puffed paddy rice mix.

6. Place on butter paper and allow to dry in the sun, turning over the sides till it is fully dry.

7. Heat oil and fry — a well-made aralu sandige will expand well to almost double the size. Enjoy with rice.

The freelance writer and photographer from Bengaluru seeks offbeat experiences through travel.