with an authentic Korean barbecue experience and K-pop booming through the speakers, Goguryeo in Madhapur is fast becoming a hallyu hotspot

If you have watched K-dramas, the next thing you want to try in Korean cuisine. The sight of K-drama actors relishing Korean fried chicken, japchae, bibimbap, kimbap, ramyun, kimchi pancake and grilled meats is sure to have you craving to taste them.

Hyderabad finally has a restaurant dedicated to authentic Korean cuisine. Called Goguryeo, the restaurant is run by Cho Min Yun, a Korean national who has lived in Hyderabad for more than a decade. She used to cater Korean food on request to friends and acquaintances but as word spread along with the cultural hallyu (Korean wave), order numbers for her Korean food increased on weekends. “So I decided to start a restaurant. With the popularity of K-drama and K-pop, there is a growing interest in Korean food as well,” Cho Min Yun elaborates.

Also Read | Indian vernacular, with a dash of Korean lingo

The restaurant in Madhapur, situated in a quiet lane between Avasa Hotel and Karachi Bakery, has no fancy interiors but is clutter-free, sporting glossy posters of BTS and Blackpink on the walls. However one wall is free of such to make space for projections of pre-recorded concerts for K-pop fans. In fact, as I sit down, BTS’ addictive track ‘Permission To Dance’ booms through the speakers.

A taste of Korea

The menu of 11 pages has signature dishes shown in K-dramas. They include Korean fried chicken, potato pancake, chicken katsu platter, kimbap, japchae bap, fried dumplings, ramyun, jjajangmyeon and a barbecque section. The hot seller here is the tteokboki, a fried rice cake popular as a street food. The other most frequently ordered dishes are ramyun (perfect for especially these rainy days), Korean fried chicken and grilled meats. All this, in a spacious layout that can easily accommodate up to 80 people and eight grill tables. 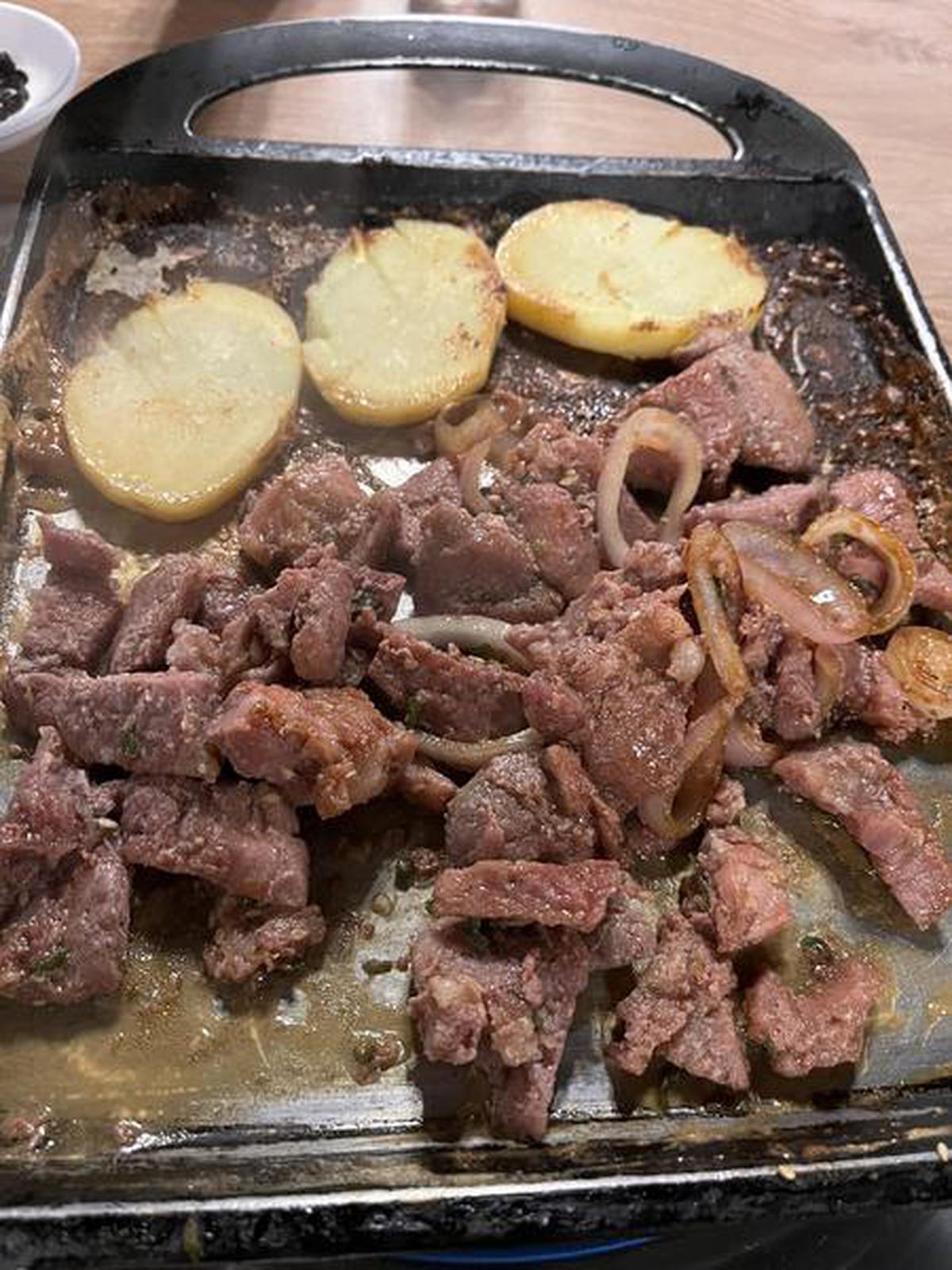 Most Korean dishes, especially the stews, are low on salt but acquire a unique flavour with a dash of gochugang, the Korean chilli paste. The paste which is not hot but slightly sweet and has a mild smokey and fermented kick to it almost instantly alters the flavour profile of a dish it is added to. For example, pre-seasoned pork ribs for grill might come across as salty until a dash of the gochujang (a fermented hot pepper paste) is added to counter it.

I ordered the Korean fried chicken, grilled meat (tender cuts of marinated pork ribs) with rice and as per Cho Min Yun’s suggestion, I tried a bowl of Korean steamed eggs as well. Before they arrived, a couple of sides such as cabbage kimchi, cucumber kimchi, braised baby potatoes in soya sauce — all made in house — were served. Korean kimchi — comprising long and tender leaves of Chinese cabbage — balances salt, chilli and sourness so that the tangy flavour stands out, It is somewhat similar to kombucha in that the flavour comes from the process of fermentation.

The steamed egg bowl is like a scrambled egg without oil or butter. The fried chicken, given the honey-rich marinade, is slightly on the sweeter side and remains crunchy even after it has cooled down. A serving of potato slices and marinated pork ribs on the barbecue at Gogureyu Korean restaurant, Hyderabad

I was quite excited at the process of seeing the grill station being readied for me. The grill table comes with a big burner that gets fuelled by mini gas cans and a cast iron grill tray is placed on it. When heated, the pre-seasoned meat with potato and onions are placed on it and within minutes the meat gets cooked. The meat can be enjoyed with either a bowl of rice and stew or wrapped in steamed cabbage leaves with gochugang and onion. 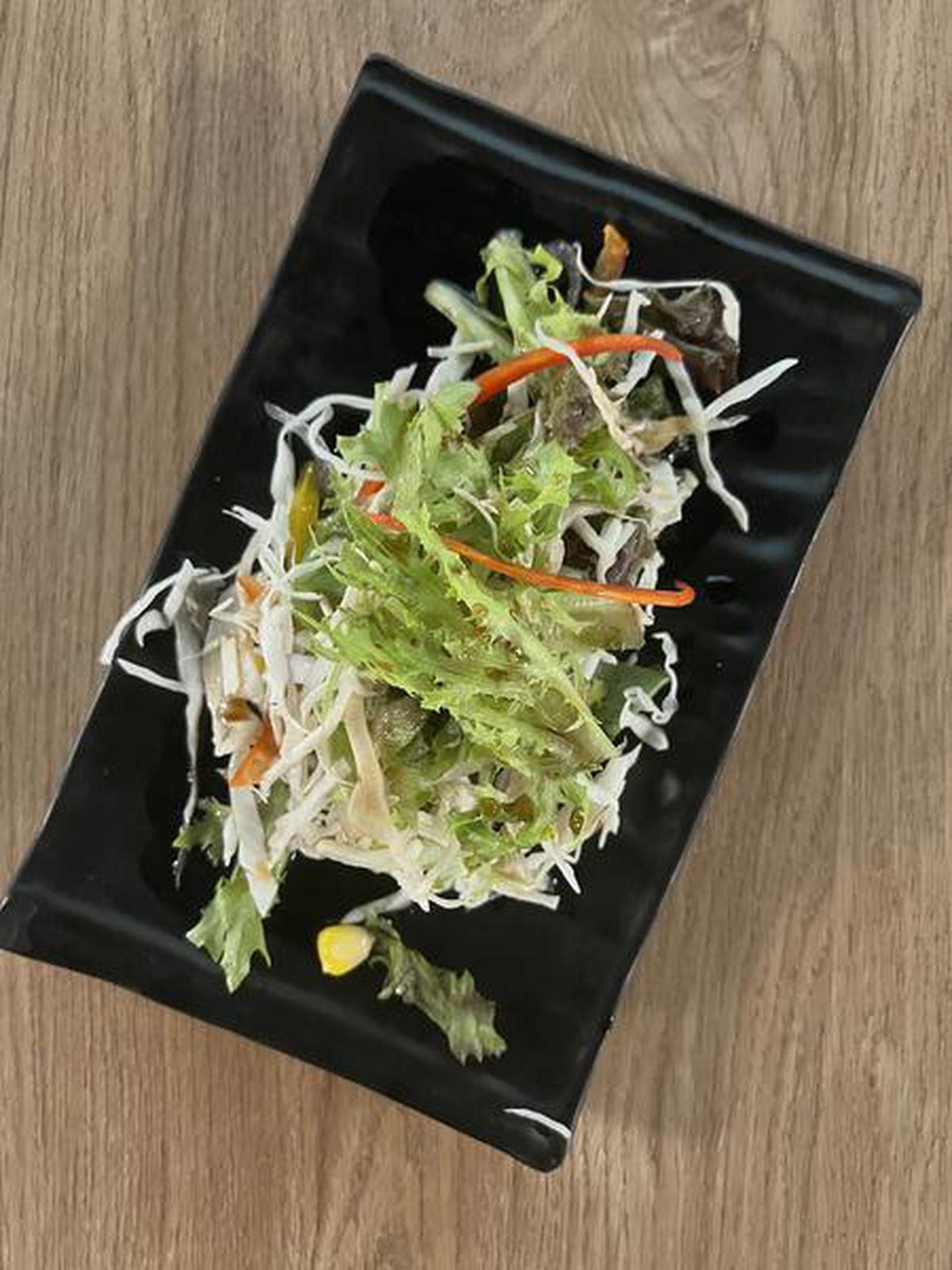 Cho Min Yun explains that as an alternative to meat, rice can be wrapped in the cabbage leaf with fresh vegetables and gochujang. And if you find the menu a little daunting and need some guidance, the restaurant’s friendly staff are happy to talk about the dishes and how to best enjoy them.

Chennai revels in the return of the Sabha canteen

Chennai revels in the return of the Sabha canteen