Ever since I can remember, synaesthesia has played a particularly important role in my life. Numbers for me have genders. Days of the week have a definite hierarchy, with Sundays leading the pack. And all my months are neatly divvied up to form a rainbow of colours.

May’s colour has always been somewhere on the spectrum between a buttery yellow and an earthy burnt Sienna. No big surprise there. Think bright summer suns, freshly baked lemon chiffon cakes and yes, the indescribable hue of a ripe Alphonso.

But there are two more shades in the family that truly define the month and, by default, summer for me.

One, the almost-neon tangerine shade of freshly pounded East Indian bottle masala, and two, the amber-coloured beer bottles that it is always stored in for longer shelf-life. Thus, the name — bottle masala.

While I am not an East Indian by birth, I have always been a big fan of their culture and, most pertinently, their cuisine. I’ve lived most of my life here in Dadar West, Mumbai, surrounded by a close-knit, strongly matriarchal community of East Indian families led by genial aunties who made it their mission to indulge the budding foodie in me with their yummy curries and succulent roasts. Almost all jazzed up with the ubiquitous East Indian bottle masala. From the coconut milk-enhanced mutton lonvas to a spicy chicken moile, the bottle masala reigns supreme.

Just like the 36-ingredient Moroccan ras-el-hanout spice blend or the Ethiopian berbere mix, East Indian bottle masala is made up of a bewildering variety of spices, from the more obvious Kashmiri chillies to the ‘Google-it-now’ nagkesar. The latter — I learnt just for the purposes of this piece — is also called Indian rose chestnut or cobra saffron, by the way! Besides this, the complex dry spice blend has several iterations, each with varying measurements and ratios of spices.

I would not be exaggerating if I said that every East Indian family uses a different recipe for bottle masala — some use 20 spices, some 30, while the most elaborate of the lot use up to 40. But try asking any self-respecting East Indian cook to part with the recipe and they will sooner part with their lives. Such is the almost militant level of secrecy that shrouds the hallowed recipe.

In fact, I remember an old neighbourhood aunty once telling me that East Indian mothers never teach their daughters how to make bottle masala for fear of them taking the prized recipe out of the family after getting married. They have no such compunctions, I was informed, for incoming daughters-in-law. I rest my case.

This leads me to a vital link, not just to the whole bottle masala supply chain, but also to my very synaesthetically-heightened month of May — the masalawaali maushis. It is the rhythmic thumping sound that these singing, itinerant spice-grinding ladies make while pounding the aromatic, roasted spices for bottle masala that I associate most with summer as well. 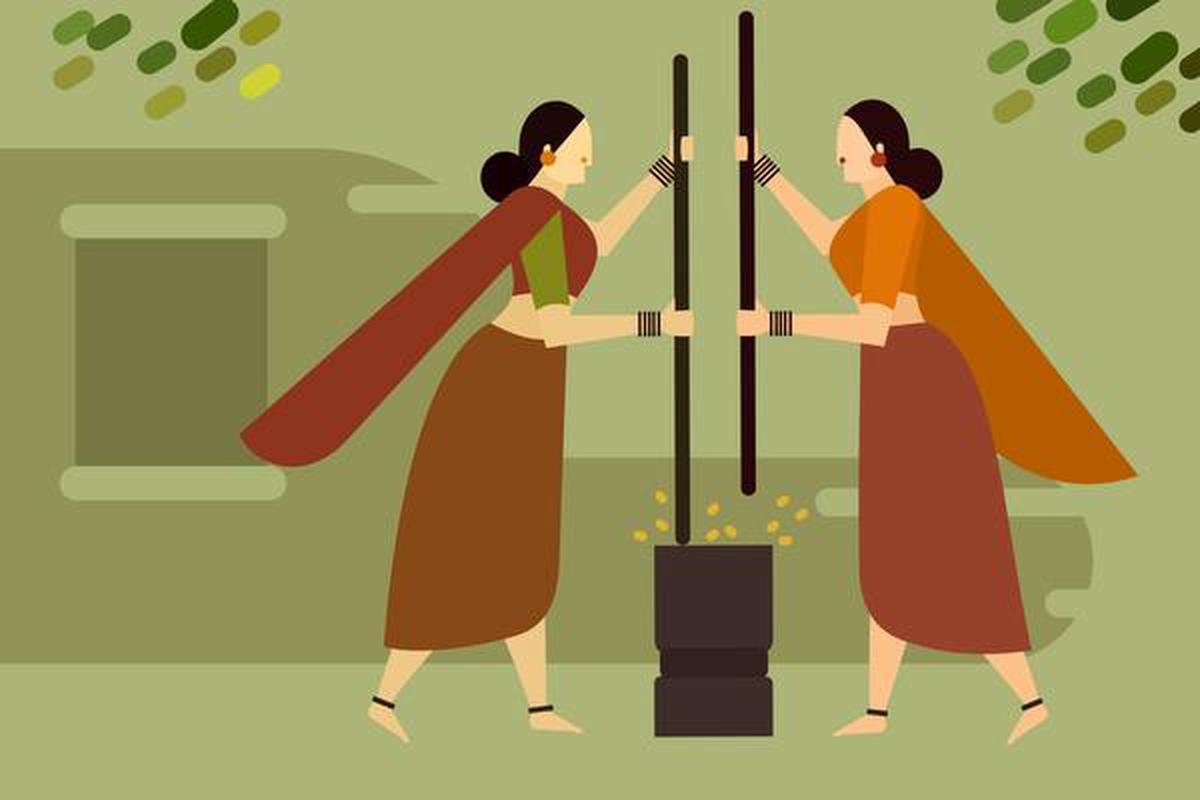 That May music has been missing this year. Thanks to the pandemic and the ensuing lockdown, my backyard will not be infiltrated this season by the pungent fumes and lilting melodies wafting from neighbourhood gardens. The maushis will not be coming this year.

Mainly drawn from the local Maharashtrian Agri community, these women are generally always much in demand and need to be booked months in advance. They are always armed with their wooden pounding vessel, the ukli, and its cohort, the mussal, a mace-like tool with a metal base to hit the ingredients. These groups of ladies travel from house to house from early March to the end of May to grind the annual supply of bottle masala according to each family’s specifications, making sure to finish this important task before monsoon sets in.

Interestingly, though the maushis are experts in the sifting, roasting and final pounding of the spices, they will never fully know the final recipe. Not only will the house matriarch weigh each ingredient separately and hand it over to the maushis just before pounding, but as per tradition she will also withhold one vital ingredient that she will pound herself and add later to the final mix.

One of the most enduring and endearing traditions of the maushis is the singing of ovis (which literally means ‘strung together’) while they pound the spices. More specifically, they sing jatyavarchi ovi, specialised Marathi grinding songs that are used as poetic metre for rhythmic prose.

One such ovi by Bahinabai, an unlettered 19th century peasant-poet from the Khandesh region of Maharashtra, comes to mind and seems a perfect way to sum it up in times like these. It says:

Get up at midnight, neatly set

Be patient, don’t talk back, hold

Let the memories of your old life 1. Precisely measure and dry all the ingredients under the sun for two days, making sure no moisture remains in them.

2. Over low heat, dry roast the Kashmiri chillies and the Madras chillies for 8-10 mins in a wide-bottom pan, making sure to not to burn them.

3. Similarly roast the rest of the ingredients for 7-8 mins on low heat or until they are aromatic.

4. Dry grind the roasted ingredients in several batches until fine, either in a large ukli or in a spice blender. You could also take the mix to a local mill to get it pounded.

5. To stick with tradition, tightly pack the bottle masala into amber- or green-tinted, sterilised beer bottles, sealing the top off with butter paper and hot wax. Otherwise, one can also store it in an airtight container or any other lidded glass container.

(This makes for an approximately 2.5 kg yield of bottle masala, so adjust according to desired quantity.)

All Gluten-Free and Top Allergen-Free

All Gluten-Free and Top Allergen-Free