Of late, Sharath Reddy Gattu has been living at a makeshift accommodation set up for his staff to maintain hygiene and avoid contamination. His Hyderabad-based enterprise, Kiaro Foods, which started as a dairy production and delivery brand, remodelled itself into a ‘farm-to-home’ service, within a week of the lockdown. The app-based brand has been able to supply seasonal vegetables and fruits, including much-coveted mangoes during the lockdown. 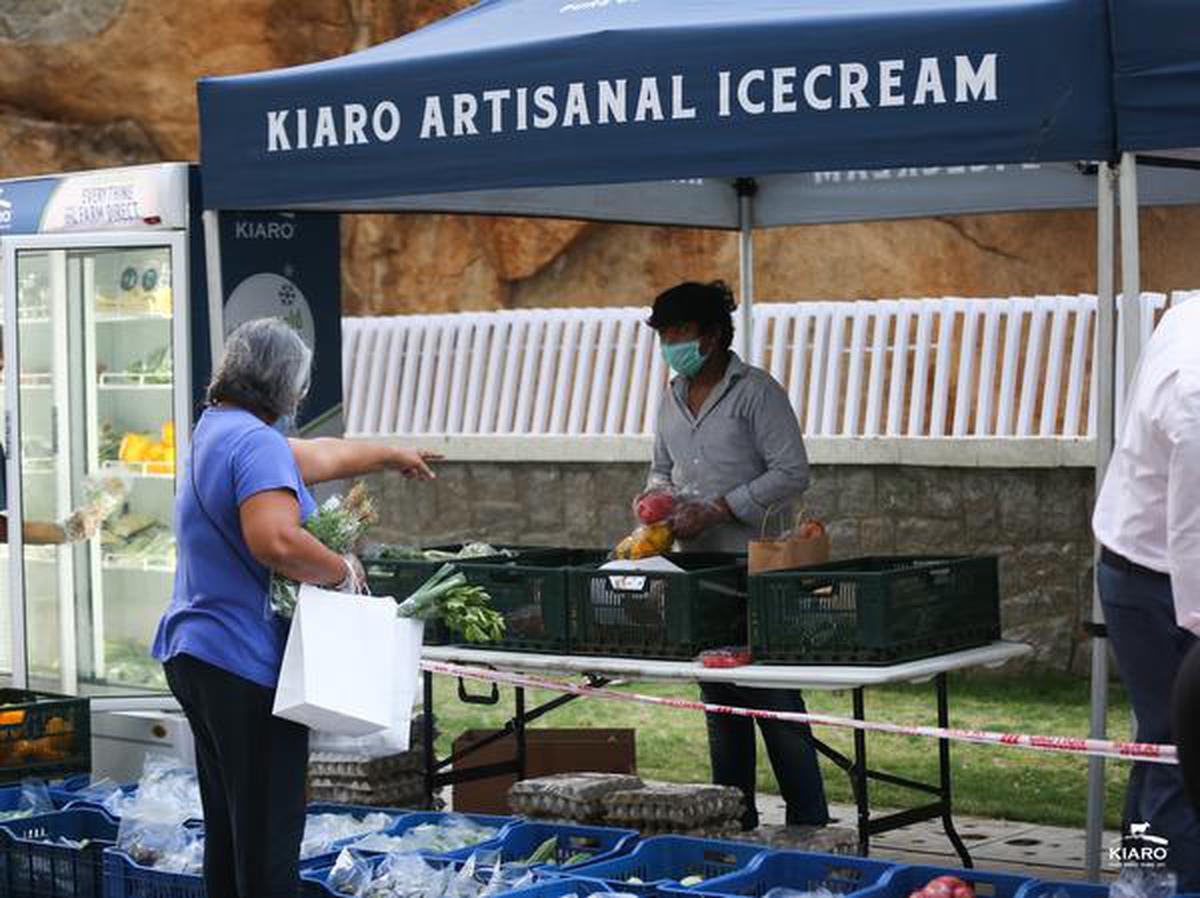 Sharath shares, “Letting good produce that wasn’t going out of Telangana rot seemed like not only a waste but also meant we weren’t utilising our existing logistics the right way. After much thought we redesigned our app and introduced same-day harvested vegetables.” The re-branding exercise was driven by the need to help farmers, so that their hard work and produce would not go waste. In the process, ledgers and accounts have gone for a toss, as they focussed on sourcing and logistics as the lockdown came as a bolt from the blue. 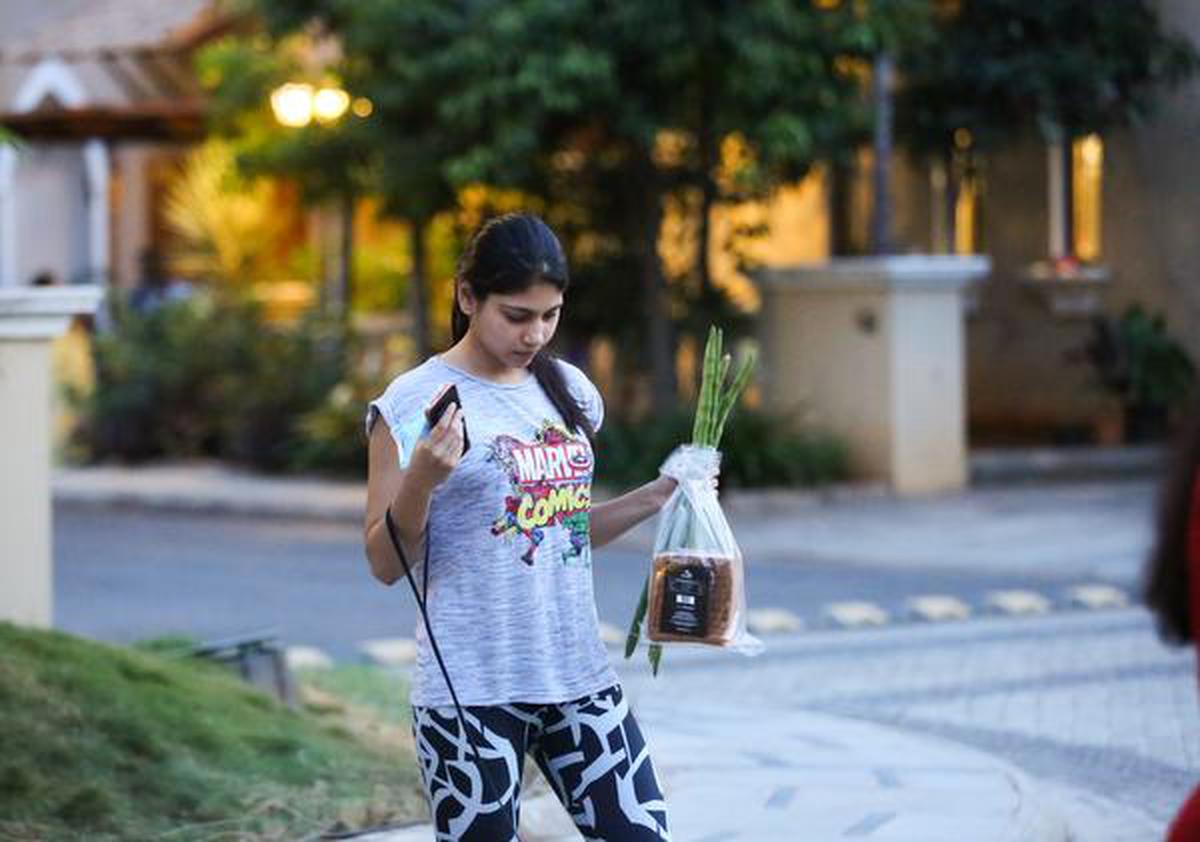 A young woman with her selection of fresh produce and baked goods from Kiaro Foods, Hyderabad

Sharath says, “At first, we sourced and sold produce without grading; we are not very proud about that. However, we learnt from our mistakes and reworked the system and started grading the vegetables and fruits. Then we sourced eggs from an exporter and started selling them through the app. Soon we realised there was a huge demand for bread, wheat, fruits. We literally rebuilt ourselves on the basis of demand. Our motive was to make sure people get what they need. The breads we supply are from an upscale confectionery that’s known for its desserts; the wheat is also from an exporter who had a big amount of fresh wheat that couldn’t be exported due to lockdown.” 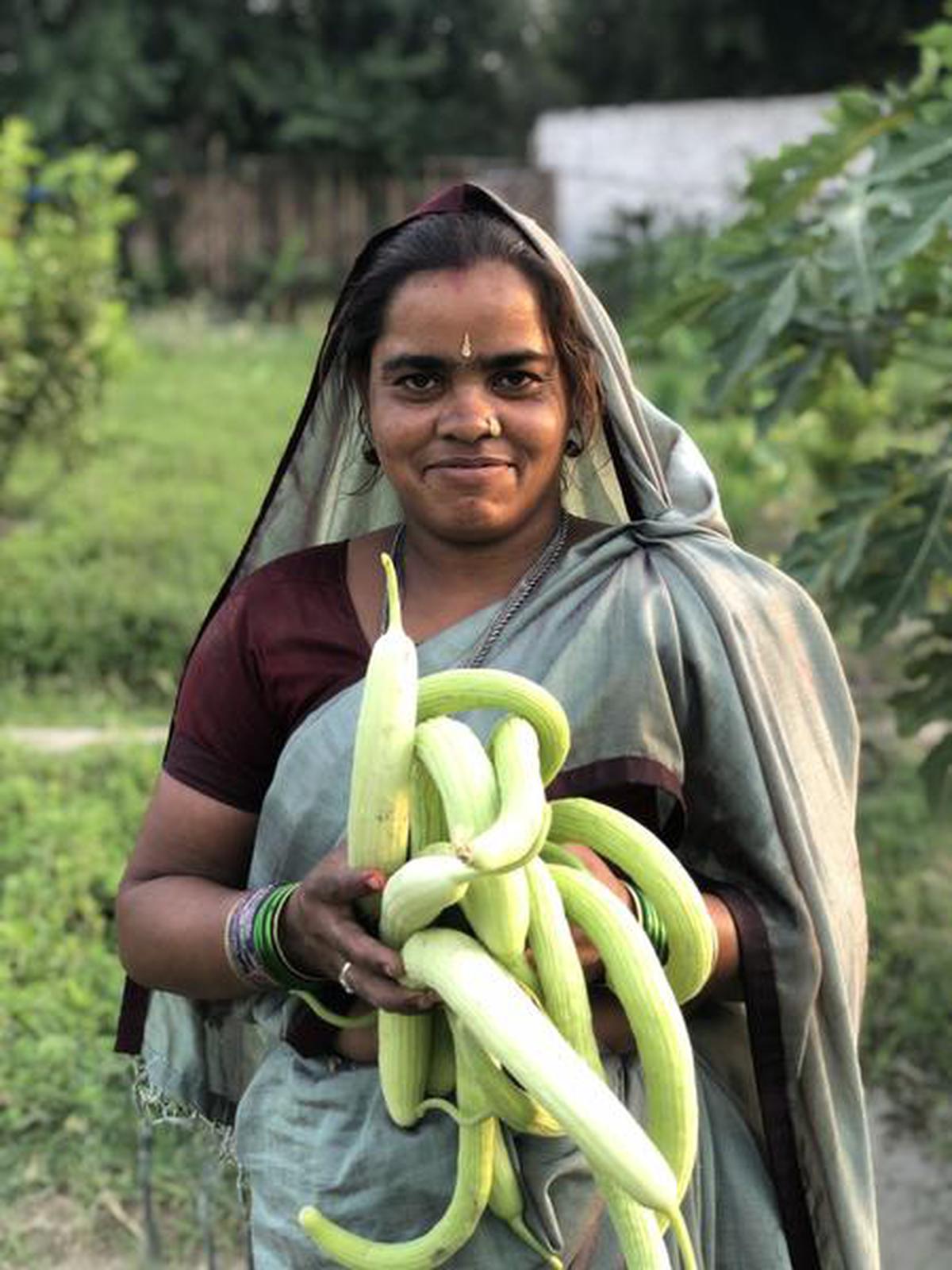 Puneet Tyagi and Neha Bhatia started farming as a hobby four years ago, and soon turned it into a business, first with farm-to-fork weekend experiences and zero-waste workshops, and now with home delivery of their produce that is free of inorganic additives. “We have six farmers working with us, four of whom are women. Their husbands lost their jobs, and so came to the farm; we were able to employ them to deliver the produce,” says Puneet. He says the vegetables are harvested and packed into boxes by the farmers and they would be loaded and delivered by another set of people, ensuring minimal handling.

Initially, they needed to realign deliveries only to Noida, but have now worked out a system of delivering across Delhi-NCR (theprodigalfarms.com/farmstore). Because orders had drastically reduced, and they had a lot of produce, they began making home processed foods like pickle, which people can order. Puneet says the lockdown has helped bring the farmers in the neighbourhood together and many have shown an interest in halting the use of artificial pesticide and fertilizer. Achintya Anand, a chef and first-generation farmer, began five years ago, by supplying produce to restaurants and hotels. The lockdown saw demand from the hospitality sector dip to almost nothing.

Within a week or so of operation, the website, orders.krishicress.com, which had been ready, went up for home-delivery orders. “We had been trying it out for a year, but we had a small presence,” says Achintya. Now, orders have doubled, but the cost of logistics poses a challenge. Also, there are two farms, in Chattarpur and Faridabad, so coordinating transportation has not been easy. Another challenge has been maintaining hygiene protocols and implementing changes overnight.

“We are very lucky because a lot of our staff stay at the farm, so there’s minimal contact from the outside; the rest all live close by. Also, as we are located in a remote area, we had started a pick-up and drop facility before the first lockdown,” he says.

What remains popular are his salad and microgreens, as well as the value-adds like kombucha and red pepper chilli jam, whether for households or restaurants, some of which have begun delivery-based kitchens. He’s got orders from a few because, “People are extremely conscious of what is going into their food now.” While demand is growing, they are managing with existing capacity: “It’s difficult to build capacity at this time,” says Achintya. 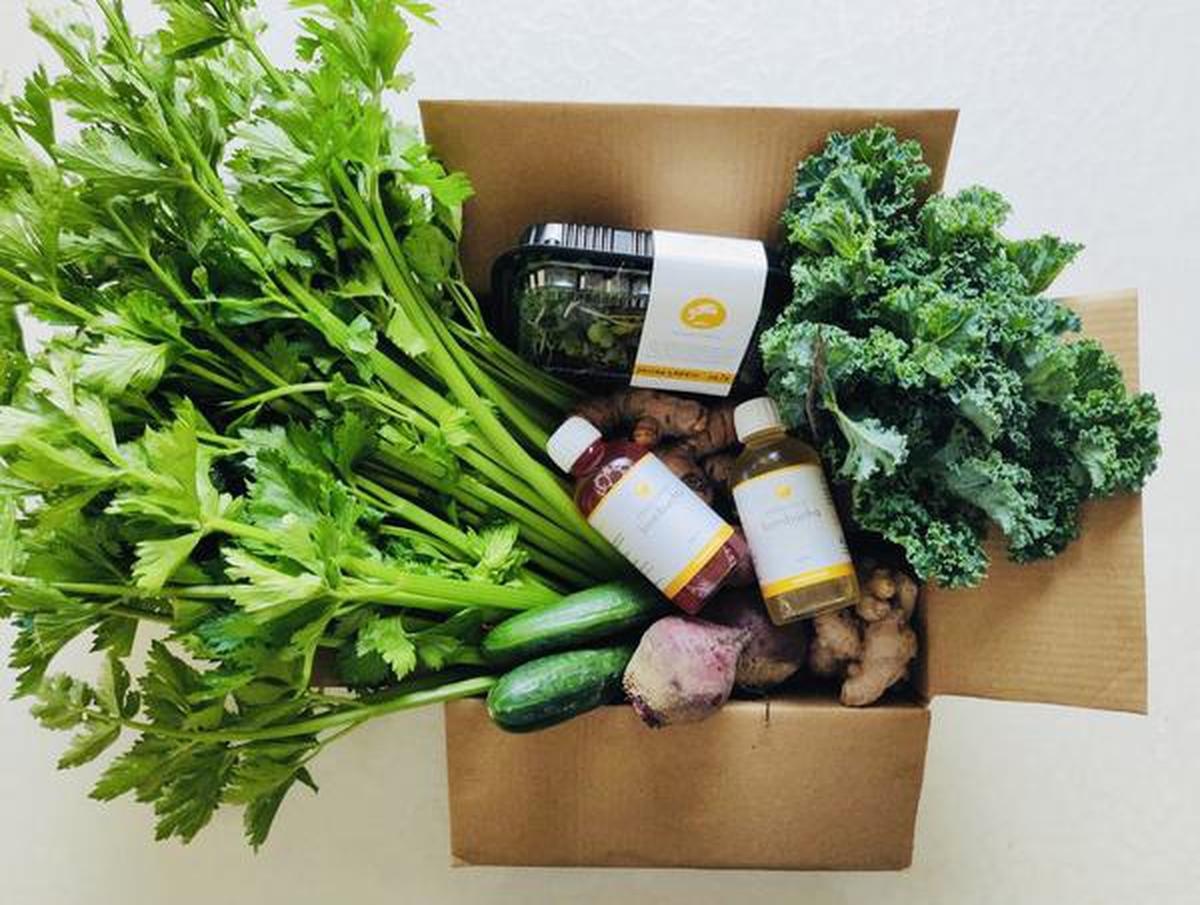 He sees the lockdown as an opportunity to promote agri-businesses that grow crops free of chemical residue, and push for new hygiene-driven protocols and practices. Eventually, he would like to see farmers band together into a cooperative and set up a platform where the produce goes from farm to table. “The focus needs to be on post-harvest handling. We produce fruit and vegetables as good as any in the world, as long as they’re on the tree or plant. It’s what happens after: the storage, the cold chain maintenance. As for the future: “I don’t want to take any calls for the future. Even the chefs don’t know when their restaurants will be up and running.”

For a fair deal The son of agriculturist Shekhappa, Jagadish Sunagad owns 15 acres of land at Baluti near Bijapur. His entrepreneurial skills have helped thousands of farmers in North Karnataka. “I cannot get over the onion and watermelon losses this season,” says Jagadish. “I have an MBA, and being a farmer myself, I understand the farmers’ need to reach their produce to the right quarters. They need guidance in growing and getting the right subsidies.”

Jagadish, CEO of Basavana Bagewadi Horticulture Farmer Producer Company (HFPA) in Kolhar taluk of Bijapur district, has released nine videos on social media to help farmers. “We have 1,000 farmers from 22 villages in the North Karnataka belt in HFPA. Karnataka has nearly 100 Farmer Producer Organisations with about 1,000 farmers, who swung into action to help crops reach consumers. I worked from Kolhar taluk to minimise losses for onion, watermelon, banana and maize.” Jagadish arranged for nearly 100 tonnes of vegetables and fruits to reach cities every week.

“Transportation and labour were herculean tasks, but we saw to it that losses were restricted to about 50%. I roped in my family too; they accompanied the trucks. A farmer associate, Girish Telage, had six truckloads of watermelon worth ₹96,000. In Shivajinagar, he was offered ₹30,000. I intervened and re-routed the trucks to Yeshwantpur, Goraguntepalya, Peenya and Rajajinagar markets and got him a ₹20,000 profit.” The best deal, according to Jagadish, was the direct FPO-to-FPO exchange programme, where vegetables and fruits were bartered depending on requirements from farmers in Karnataka, Tamil Nadu and Andhra Pradesh. “Onions (500 tonnes), watermelon (400 tonnes) and 200 tonnes of potato did not go waste, thanks to this arrangement, although pricing was heavily compromised.”

Why are we eating cabbage, broccoli, and beetroot and not more sundakkai (turkey berry), vazhapoo (banana blossoms), and karunai kizhangu (yam)? This is among the many questions Aurovillian farmer Krishna McKenzie wants us to ask ourselves. According to him, the pandemic and resulting lockdown has been a “catalyst” in making us understand that a centralised system is not the most practical, or efficient answer our food needs. Deprived of vegetables when the existing food supply system faltered, he says that people “are now waking up to local farming and local distribution”. 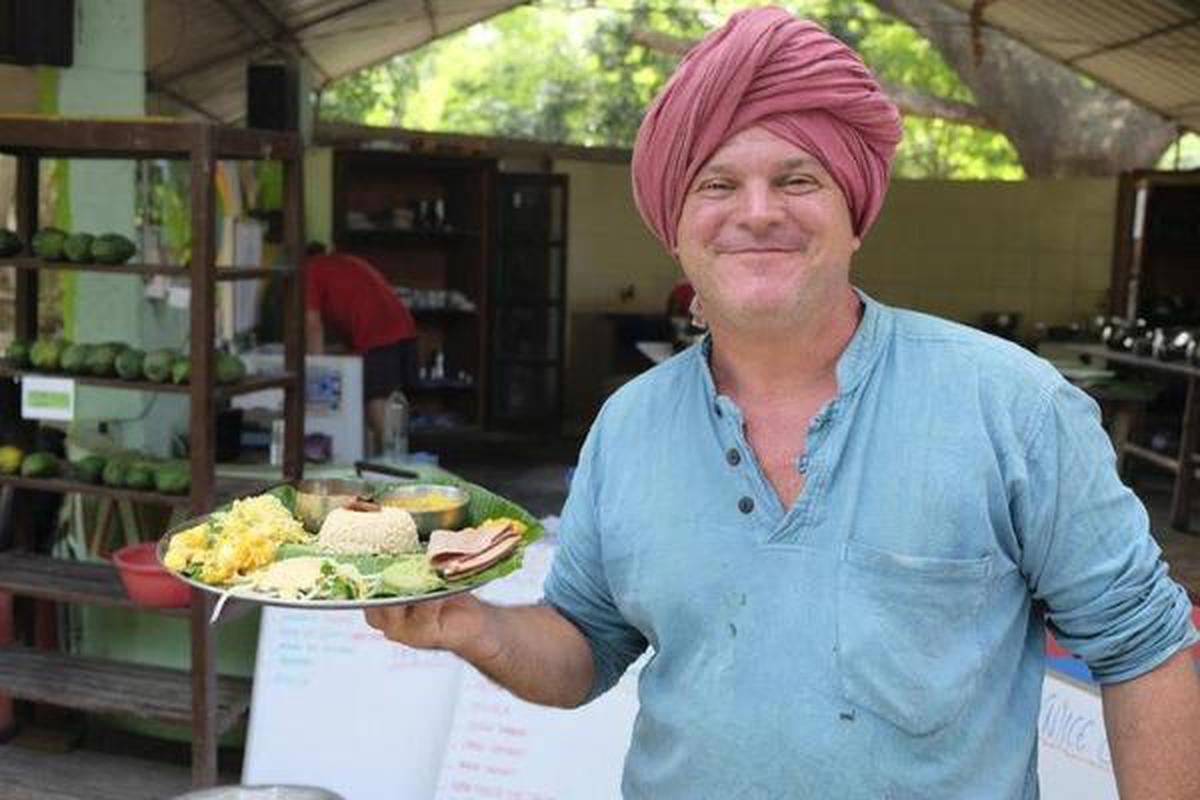 The 47-year-old Englishman, through his Solitude Farm in Auroville, has been at the forefront of what he calls a “cultural redemption” by reminding people of their traditional knowledge, particularly of food and the politics that surrounds it. He has been on his feet during lockdown, setting up kitchen gardens, as well as giving away keerai cuttings, saplings, and seeds to those looking for ways to start their own vegetable patch.

“More and more people are connecting with me now; just yesterday, someone came to take home murungai keerai (moringa) and vazhathandu (banana stem) cuttings,” he says, adding that there has been an increase in the number of organic food baskets he sends out to Auroville and Puducherry. “I have been helping people at their gardens, many of them are now thinking about growing their own food. They now have more time than they usually would.” Krishna points out that people in his neighbourhood are coming together to share their produce.

Krishna has been posting videos on social media on how to better employ urban spaces for vegetable gardening, as well as how to cook local vegetables. He says, “This pandemic has been a wake-up call; it has shown us that the need for food is the common adhesive in the system; that food is one.”

The weekly agro bazaar in Thiruvananthapuram, Swadeshi Karshika Vipani, sells produce procured from organic farmers across the district. The maximum produce for this comes from Perumkadavila in Neyyattinkara, on the outskirts of the city. The closure of the market due to lockdown meant there was no avenue to sell the produce for these farmers.

That is when V Sreekumaran Nair, president of the Facebook group Thiruvananthapuram Karshaka Koottayma, which is one of the driving forces behind this agri market, came up with a solution. He took orders via WhatsApp, collected produce from 14 farmers in the area and home-delivered the vegetables and fruits to regular customers in two autorickshaws.

“Four of us coordinated the supply. We have nearly 100 regular customers and could deliver the produce to about 40 of them. We did that until lockdown restrictions were made strict. After that, we started selling produce through an eco-shop with the support of the regional agricultural office and Panchayat officials. Now the produce gets sold at our farms itself,” says Sreekumaran, who cultivates on over 2.5 acres. In addition, he has given away seeds and saplings for free.

“I have distributed them to 214 households and 80% of them are taking up farming for the first time. Since many of them are taking baby steps, I have distributed seeds of tomato, lady’s finger, long beans, amaranthus, and brinjal that can be easily grown. Many came all the way from the city on two-wheelers to collect the seeds. There has been a renewed interest in farming and now many people seek help to set up kitchen/terrace gardens,” he says. “When I give away the seeds, I tell them that each has a life growing inside it and they have a responsibility to take care of it,” he adds.