Malayalam actor Joju George began trending on social media when he announced that he had turned farmer during the lockdown. He posted pictures of his sprawling vegetable garden on the rooftop of his garage. In addition, his farm has fish, cows, goats and hens. Joju’s Instagram posts made the day for the team at My Kaad (My Forest), which had set up the farm for the actor.

“It was our first large-scale project,” says Manoj M Nair, founder of My Kaad, which goes by the tagline ‘For rest, For us’. The venture promotes “sustainable farming model for survival” by providing guidance and support to start vegetable and fruit cultivation. “It will be a landscaped garden with ample space for the family to unwind. Also, depending on the area available and interest of the clients, we integrate aquaponics (growing fish), poultry and livestock. Rainwater harvesting, proper waste management and use of solar energy can also be incorporated in the model,” says the businessman based in Kollam in Kerala. Manoj’s inspiration for such a venture has been his friend and scriptwriter Sajeev Pazhoor, who successfully implemented integrated farming on the rooftop of his home at Poojappura in Thiruvananthapuram district. Although Sajeev’s house stands on just three cents of land, he grows several vegetables by way of aquaponics and hydroponics (soil-less farming). “I have been into farming for the last 14 years. My garden has grapes and shallots as well. We have a rainwater harvesting system and biogas plant as well. A video of my farm inspired Joju to follow the model and My Kaad team stepped in to help him,” says Sajeev, “a mentor” of My Kaad. 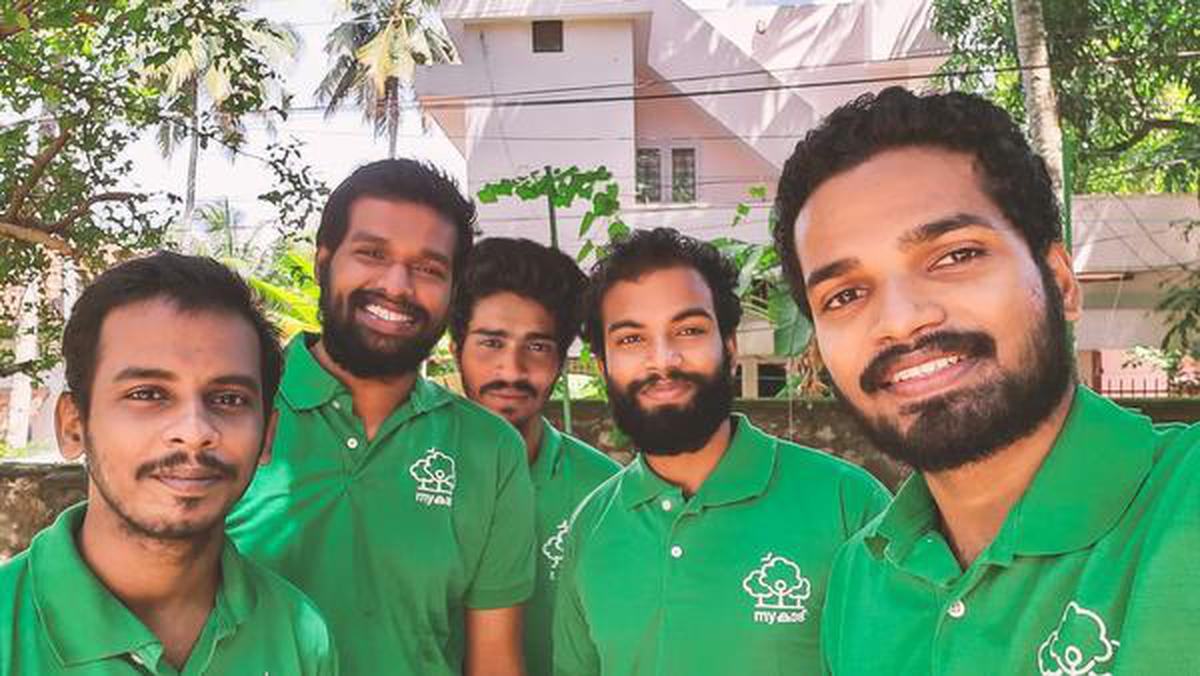 The core group of My Kaad has five engineering graduates – Jewel Babu, Vishnu VKT, Vishnu Babu, Sandeep MM and Sreejith T. “The five engineers had come to do the artwork in one of my bakeries when they were in their final year of engineering. I later set up a business enterprise for them and when I mooted the idea of My Kaad, they were happy to be a part of it,” says Manoj, adding that it is word-of-mouth publicity that has helped My Kaad grow as they don’t have any social media page.

“The pandemic and the resultant lockdown have made many think about the need to be self-sufficient in food, especially pesticide-free farm produce. So, earlier, if it was difficult to convince people about the importance of consuming home-grown produce, the situation is different now,” he says.

However, the team does not entertain all clients. Sajeev says the person should have a passion for farming and be willing to invest enough time to take care of the plants. “We go ahead only if the land is suitable to start any form of cultivation,” he says.

The variety of crops that can be planted depends on the requirement of the client. Saplings, [organic] manure, grow bags and gardening tools/accessories, if necessary, are provided by My Kaad, along with guidelines about taking care of each kind of plant.

The team started the venture by designing vegetable gardens at their own homes and later at their friends’ houses. Harish S, marketing head with an insurance firm in Kollam district, is one of them. “Although we’ve had a kitchen garden, that was more like a wild growth. Pest attack was a problem. But the lockdown has changed our outlook towards farming and now we follow the instructions given by My Kaad. My 12-year-old daughter waters the plants and inspects the saplings in the mornings and evenings,” Harish says.

Meanwhile, Joju’s farm has inspired more actors to follow suit. Two leading actors have already contacted the team. “We are not ambitious about having a State-wide network. What matters is that we are inspiring people to have their own green space and grow their own food,” Manoj says.