Padma Shri at 105, meet the Coimbatore grandma who is giving a leg up to organic farming

She is 105 years old and still wakes up before the sun to head to the fields. Meet R Pappammal, an organic farmer from Coimbatore who was awarded the Padma Shri for agriculture this year

“Have a fruit, will you? Help yourself, there’s plenty.”

“Get him a bonda from that shop. Don’t send anyone away without giving them something to eat.”

“Have some water first.”

It is nearly impossible to hold a conversation with 105-year-old R Pappammal while she welcomes a steady stream of relatives, friends, and journalists to her home in Thekkampatti village near Coimbatore. Not when she insists on feeding every one of them.

She was awarded the Padma Shri this year for popularising organic farming and ever since the announcement, a few days ago, has been giving numerous interviews. “I gave 30 interviews yesterday,” she says over phone, laughing.

This bustle is new to her, but she has been taking it in her stride, posing for cameras, sometimes smiling, sometimes looking stern and visibly exhausted from walking to her field every time a photo-journalist asks her to. “This is all like a dream,” says Pappammal. 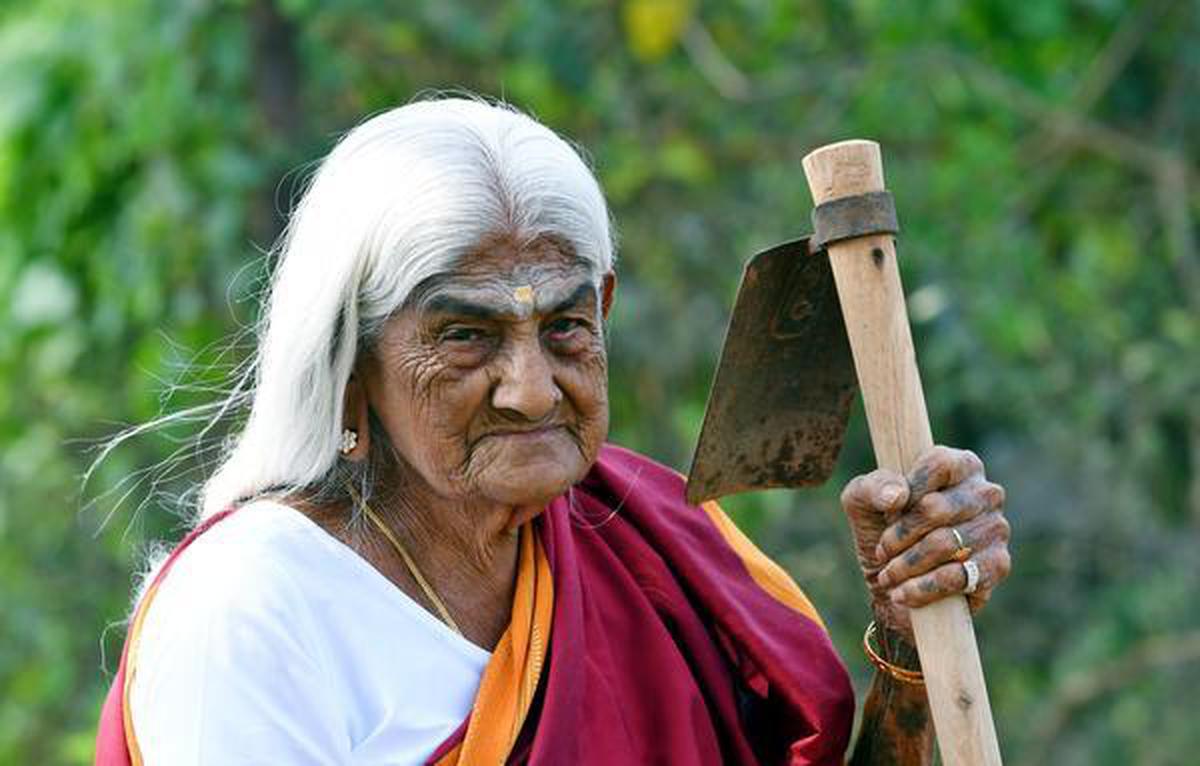 Pappammal comes from a generation of farmers who believe in doing the hard work themselves. “I used to assist her in the fields and remember her chiding me if I rested even for a little while,” recalls her sister’s grandson R Balasubramaniam. “She would say, ‘When I am working non-stop at this age, what makes you stop? Get back to work’.” He adds, “She was quite intimidating: six-feet tall, with a stern voice and feet that never rested, we would bury ourselves in work whenever she was near.”

Pappammal is from a family of agriculturists. She owns a 2.5-acre farm in her village, and in the past, grew lentils such as horse gram and green gram. Now, she mostly grows bananas. Over the years, she has worked closely with Tamil Nadu Agricultural University. She would travel alone to their many farmers’ meets and implement all that she learned.

At one such meeting, Pappammal heard the term ‘organic farming’ for the first time. She came home and tried it out. “I learned that all the chemicals that we used on our crops were harmful for the soil and for consumers,” she says. Her methods soon gained popularity and the University started sending students on field visits to her village to learn from her. “They visited her as part of the ‘Village Stay Programme’,” says Balasubramaniam.

Pappammal too visited farms that the University recommended. “They would send her a letter a week ahead and she took a bus to the village or town,” says Balasubramaniam. This way, Pappammal learned from the best in the field and also shared what she knew with them. “She has travelled to several cities for farmers’ meets,” recalls Balasubramaniam adding that at most of them, she was probably the only woman farmer. Soon, the sari-clad lady with a firm tone became a local celebrity. She had no fear. “She never thought twice about approaching any officer in the many meetings she attended,” says Balasubramaniam, adding, “She would walk right ahead, enquire about his family and hometown and get whatever she wanted done.”

Her family got used to her ways. For 50-year-old Balasubramaniam, her travels often resulted in a steady supply of treats when he was younger. “She would buy us jalebis and ladoos from the city,” he remembers. “She was stern, but loved us very much.” Another aspect that defined Pappammal was her eye for perfection; even if the task was something as mundane as de-weeding, she would insist on doing it perfectly.

A common question Pappammal endures is the secret to her long life. “I think it is what I ate growing up,” she says. “I cooked millets such as ragi, thinai, and samai in a mud pot with water and mixed this with curd or buttermilk and drank it with crunchy onions or green chilies,” she says. This was her breakfast before she headed out to the fields at 4 am. “I brushed my teeth with neem twigs and used no other chemicals,” she adds. “Instead of soap, I rubbed myself clean with stone.”

She also never allowed age to slow her down. “Even today, I wake up before the sun, wash my face, and go around the village once,” she chuckles. “I cannot sit still.”