Seaweed is the latest superfood spicing up Indian fine dining, in dishes from soups and salads to jhaal muri and cocktails

Ulva. Padina.  Sargassum swartzii. What might seem like alien gibberish is a trio that would do us a whole lot of good to get acquainted with. For they very well might be the foods of the future.

Also known as ‘sea lettuce’, ‘sea fan’ and ‘sea holly’, respectively, they are just three of over 800 species of seaweed found abundantly in the waters along India’s 7,516 km coastline. Sustainable superfoods, they are one of the latest food trends to take the plant-based diet craze to a whole other depth. Quite literally.

Besides helping support other marine life and cleaning the waters surrounding it, the consumption of mineral-rich seaweed comes with a host of health benefits. No surprise then that seaweed farming is an emerging sector in India. One with the potential to transform the lives of coastal communities by providing large-scale employment and additional income. 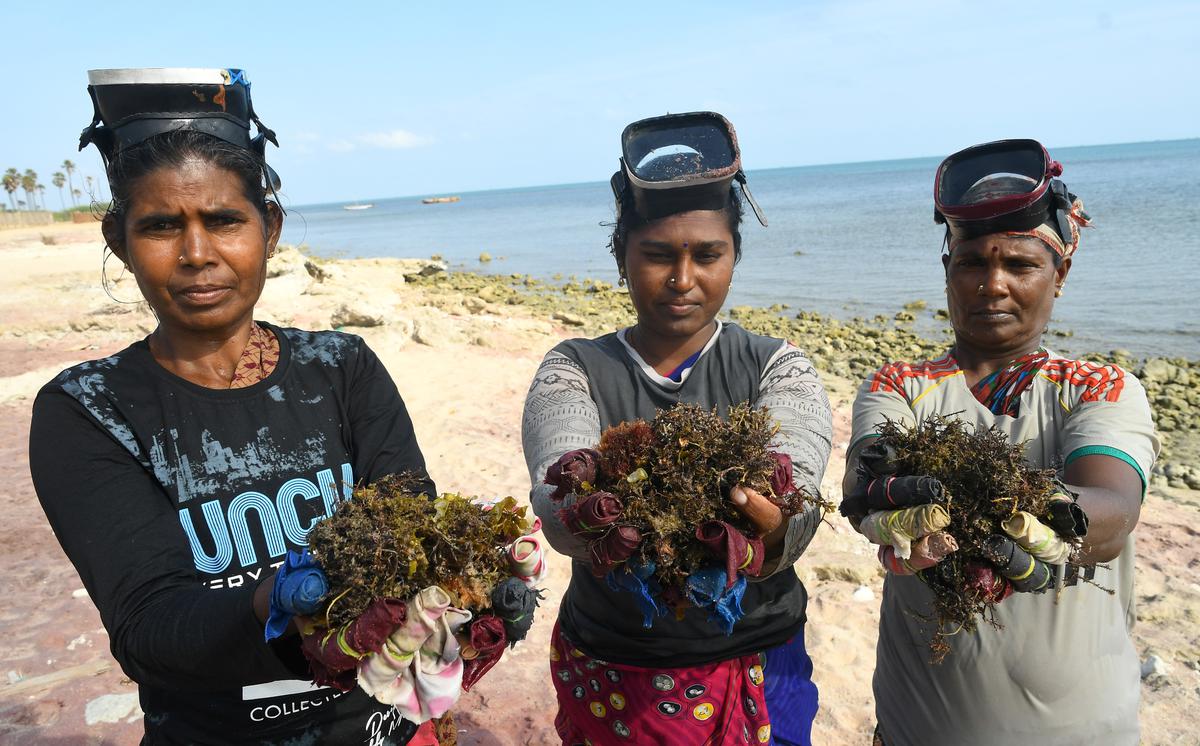 According to the Central Marine Fisheries Research Institute, in 2021, India produced 34,000 tonnes of seaweed, but has the potential to produce around 9.7 million tonnes per year. Tamil Nadu, followed by Goa, are the biggest producers of seaweed in the country, and it is also found in abundance in Gujarat, Lakshadweep and Andaman & Nicobar. Finance Minister Nirmala Sitharaman had proposed in her 2021-22 Budget the setting up of a multipurpose seaweed park in Tamil Nadu to promote its cultivation. Sadly, for most of us thus far, the idea of edible seaweed has been limited to the more ubiquitous Japanese dishes such as  nori (pyropia)-wrapped  sushi,  konbu (a species of kelp) broth with  miso and the crunchy textured yumminess of a fresh  wakame (another species of kelp) salad topped with even more seaweed in the form of a mixed seaweed  furikake sprinkling.

Ingredients from the sea

My initiation to seaweed as seen through the prism of the contemporary Indian dining scene is an embarrassingly recent one. But one that I’ve been privy to with alarming frequency over the past few months, with several F&B players entering the fray. I recently attended a sit-down dinner at Mumbai’s Masque Lab, where head chef Varun Totlani decided to shake things up a bit with one of his courses. He served us a two-part dish made up of an ulva-padina- sargassum swartzii salad and a vegetable broth.

The latter flavoured with  gondhoraj lebu as a zesty foil to the brininess of the three types of seaweed the soup was infused with. “Seaweed is now being discovered in the waters of Goa (among other places). So, my recent trip to Goa was to suss out new flavours and ingredients from the sea that I’ve incorporated in this menu,” says Totlani. Perfectly aligned with the Relais & Châteaux group’s annual Food for Change campaign — that had regenerative agriculture as its top agenda for 2022 — is Niraamaya Surya Samudra, its member hotel in Kovalam, Kerala. The hotel’s group executive chef Prakash Nayak, who has come up with a green papaya salad with  nori, says, “We greatly support the growth of a sustainable ocean economy by carefully sourcing goods from licenced merchants and local fishermen. One approach to develop awareness that can help rejuvenate the ocean and educate our visitors is by using seaweed, which is known for its rich nutrients and is a crucial ally against climate change.”

Seaweed in food, pharma and more It was during a research excursion in coastal Tamil Nadu in 2015 that Gabriella D’Cruz met with what she calls an “incredible community of women seaweed harvesters” and learned of their fascinating work, where they free-dive to collect seaweed in the Gulf of Mannar. A few years later, armed with a Masters in Biodiversity Conservation and Management from the University of Oxford, D’Cruz launched The Good Ocean, a Goa-based company that harvests, processes and supplies a variety of dried seaweed to chefs and restaurants across India. Dried seaweed packaged and sold by The Good Ocean.

“I am fascinated by the versatile nature of seaweed. India currently uses the gel extracts from seaweed (agar agar, carrageenan and sodium alginate) as additives to food and pharma products, but there’s so much more that we can do with these species. Seaweed make an excellent nutraceutical. And although it comes from the sea, it is completely vegan. Seaweed is also scientifically proven to improve gut health,” says D’Cruz. Keeping the superfood and its mineral-rich properties at the forefront of his creations is Vineeth Krishnan, bar head at Mumbai’s Pan Asian restobar Koko. His  Miso Caliente, a  nori and  miso whiskey cocktail, curated by Yao Lu from Shanghai-based Union Trading Company is the sum of its red miso paste, honey and  nori parts. All tied up with a dash of chilli tincture to finish. “As an ingredient, seaweed provides the key characteristics of saltiness, iodine and charred-ness. It also is an outstanding source of the true scent of the ocean,” says Krishnan. Yeshwant Holkar, operating partner at Ahilya By The Sea, Goa.

Having reconstituted  wakame — infused into vermouth and coriander leaves — as its chief component is the Ahilya By The Sea vodka cocktail served by the eponymous Goa resort. “Sustainability and responsibility in terms of our natural environment has always been core to what we do,” says Yeshwant Holkar, operating partner at Ahilya By The Sea. “We are very focused on how we interact with the ocean and how we source our sustainable seaweed that brings the flavours of the sea into a very crisp and refreshing cocktail.” Lato, another type of seaweed, is also known as sea grape or sea caviar. Slowly climbing the popularity charts, it was first brought to the fore a few decades ago by Sister Avelin Mary. The now 79-year-old marine biologist and Roman Catholic nun set forward her relentless effort to find lato. After years of searching, the sea grapes were finally found along the Tamil Nadu coast, and cultivated through culture technology by the Javelin Mariculture Program. At present, over 17 varieties of lato are found in India.

Using lato extensively on her menu is chef Radhika Khandelwal of the Fig & Maple restaurant, with outposts in New Delhi and Goa. “Using different produce and different varieties of seaweed allows us to explore more flavours,” she says. “My first experience working with seaweed was with lato, which literally looks like caviar or even tiny grapes and tastes like the very best of the ocean”. One can find lato and other seaweed used extensively in her dishes like  jhaal muri wrapped in  nori and served with an avocado curry leaf mousse and the newest addition to her menu, quirkily called ‘a fish who lived underground’. This one uses semolina ( upma) as a base, seasonal fish and a mango ginger and tamarind leaf sauce, topped with a pomelo and  Sargassum swartzii salad. Lato also shows up in her seaweed martini cocktail that sees vodka infused with sea grapes and stirred with martini bianco. Wonder what a certain Mr. Bond would make of it?

La Forno Café, a new restaurant in Thiruvananthapuram, has Italian and French flavours on its menu along with a range of fresh bakes

Table in the hills in South goa by Chef Avinash Martins

Table in the hills in South goa by Chef Avinash Martins