Struggling in the kitchen? Here are some hacks to help you

Feeling the urge to bake a delicious cake but don’t have an oven or even the ‘right’ ingredients? How about batter made with glucose biscuits in a pressure cooker?

New Delhi-based food blogger and cookbook author Shivesh Bhatia explains his popular five-ingredient cake (no flour, no egg), “You start by preheating the cooker (close the lid without the whistle) on medium heat for 10 minutes. This makes sure that once your batter (in a greased pan) goes in, it’s hot enough for the cooking process to start. Use a wire rack or plate to make sure that the bottom of the cooker doesn’t touch your baking pan. I don’t like adding water because then it gives more of a steamed texture.”

Stating that anyone can make the cake, he adds, “I wanted to simplify it so that even people using a cooker for the first time can make it. It takes about 50 minutes for the cake to cook on an induction stove, but the baking time varies; I always suggest keeping an eye on it.”

As for the all-important question of taste, Shivesh says, “Honestly, the texture is as good as any regular cake. If you did a blind taste test, I don’t think anyone will be able to guess that this cake is made with only glucose biscuits. That is the best part, because you get a great dessert without compromising on the taste.”

Waffles are one dessert that everyone loves but a waffle iron is a gadget that is not commonly available in Indian households. Instead of the iron, use a sandwich-maker or griller to make the waffles. It actually does such a great job and I think this is a great hack that everyone can try. 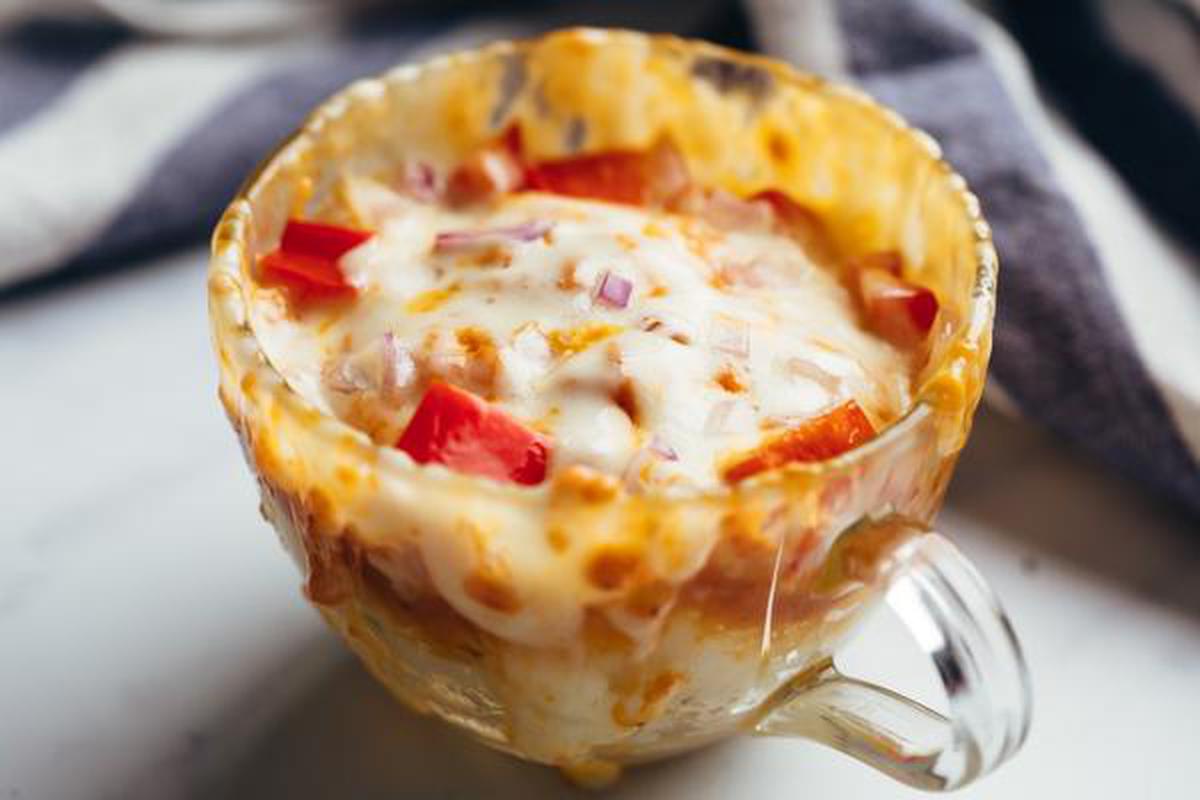 Mug cakes may be well known, but are you familiar with mug pizza and mug mac ’n cheese? Bengaluru-based food blogger Richa Gupta of the My Food Story channel says, “Mug recipes are popular because when you’re watching something late in the night, you just want something to eat and these recipes are really fast and easy. You don’t even need egg. All my mug recipes are eggless; they are made in a microwave and are quick and easy.”

So how does one make these dishes? Says Richa, “For the pizza, we use baking soda as a leavening agent and so you get that bready sort of texture in the base when it cooks in the microwave. Then you add sauce, cheese and toppings and the top part cooks and gives you that pizza-like taste. The mac ‘n’ cheese takes about eight minutes to make in a microwave. The reason for that is the pasta has to cook; it’s not like the pasta can cook in two minutes just because it’s in a microwave. After that, it is another 30 or 40 seconds when you add the milk, cheese and cornflower powder. And the texture is very similar to a regular pasta: creamy and cheesy.”

My favourite hack, if you have forgotten to soak channa or rajma overnight, is to take a casserole or anything with a tight lid, fill it with hot water, add the beans, a little bit of salt, cover it, and leave it aside for one hour. The hot water and salt will do the trick and the beans will be the same as if you had soaked it overnight.

For Sarvesh Devanandan of the Instagram page ‘A Bite Of Chennai’, a story on cooking eggs in an idli steamer gave him the idea to take it one step further and make an egg curry.

“I had watched an Instagram video of eggs being steamed and then toasted on a pan with some pepper, chilli powder and curry leaves. That’s what I wanted to make initially. Then, I had this idea of changing my mother’s recipe. She used to make tomato curry, where she would add the raw egg to it when it was boiling. But the eggs would become messy and also overcooked. So, I thought of adding steamed eggs to the curry. It turned out really well. The eggs were fluffy, soft and stayed intact.”

When we make egg dosa, we usually make the dosa first and then spread the egg on it. Instead, mix the egg in the batter and cook it. You don’t get the dosa texture, but it does become very fluffy. And it goes really well with any gravy or chutney.