A month ago Avula Bhargavi of Telugu food channel Amma Chethi Vanta reached a milestone of one million subscribers (the channel has 11.7 lakh subscribers now). A beaming Bhargavi with her ‘YouTube Gold Play button’ award the cynosure of all eyes and she shares her three-year journey (first video on May 31, 2017) began with a newspaper article. Bhargavi’s mother who had read an article on homemakers and successful YouTubers, suggested the idea to her newly-married daughter. “I was not passionate about cooking initially; my love for it has grown slowly and steadily,” she admits. Bhargavi’s mother used to record WhatsApp cooking videos and send it to her. A computer science graduate, Bhargavi could easily upload the videos sent by her mother and also post her own videos of a few simple dishes. Within one month, the mother-daughter duo posted a whopping 90 videos only to realise that a seasonal food calendar was a smart way to gain more acceptance among social media audience. “I began concentrating on prasadams and sweets made during festivals, different categories and foods made in seasons,” she explains.

After gaining confidence in six months, Bhargavi, a resident of Visakhapatnam asked her mother to stop sending videos and began doing it all by herself. “I used to cook, record, edit and post videos and also take care of my two-year-old son; Sleepless nights were normal,” she recalls.

Sourcing traditional recipes from her mother and mother-in-law, she derives ideas from her collection of recipes from books and the Internet. “I realised people do not spend much time on videos when the creator talks non-stop while making a recipe. They want clarity, not lectures,” she points out. A recipe without complex ingredients, some tips, no variations in thumbnail and recipe pictures are a hallmark of her channel.

One million and counting

Gaining one million subscribers for food videos is a special recognition. Her channel’s subscription saw a surge in the lockdown period. She got a ‘bumper hit’ with recipes of pani puri, samosa and eggless cake. Although common foods, the recipes got more views owing to some tips and substitute ingredients, Bhargavi shared. “Many people found baking as a new passion in the lockdown, but since shops were closed, not all ingredients were readily available. My eggless recipe with alternatives, simple techniques in folding a samosa sheet and making a crunchy puffed-up pani puri became popular.” 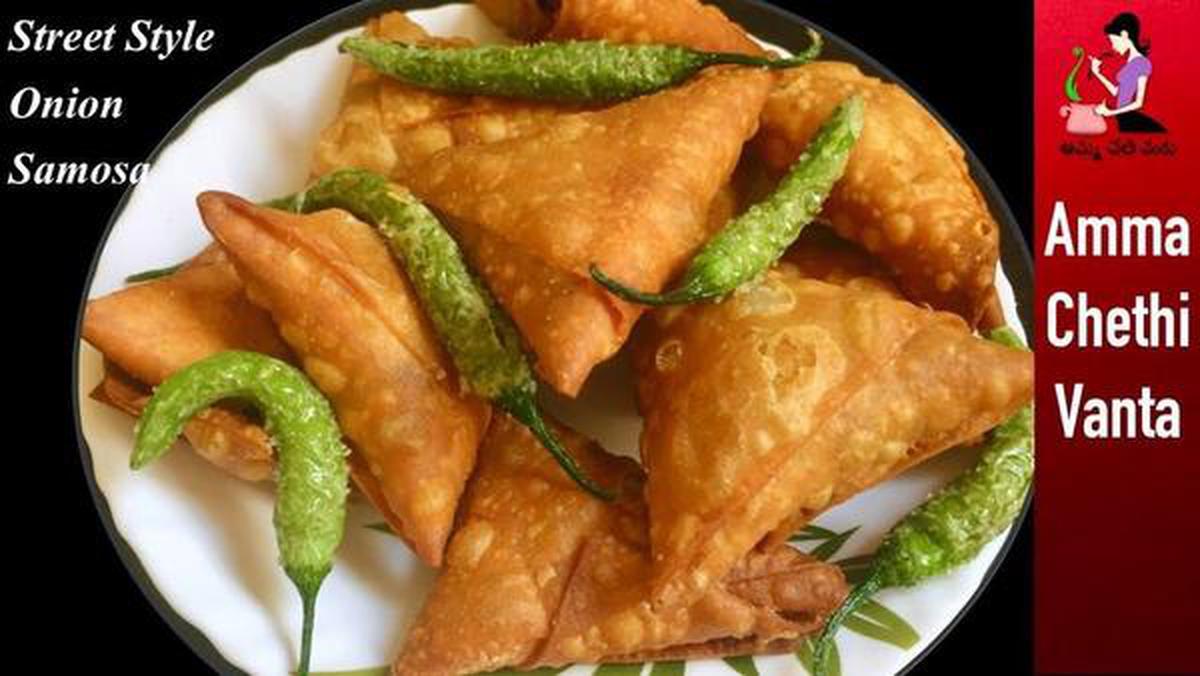 Now, her family has shifted to Hyderabad and while managing her two sons, she has also started another channel Manalo Mana Maata where she gives health benefits and nutrition tips. Her husband Dr Subba Reddy guides her on diet and other issues which aid in presentation.

She is also an inspiration for many homemakers wanting to start a YouTube channel. “Many women from simple backgrounds write to me to know my mantra of success. I ask them to be genuine and not use flashy adjectives while describing content in their channel,” she says.

Finally she reveals the two reasons behind the channel’s name. “Amma Chethi vanta’ was an apt name since my mother initiated the content and promised to send food videos. Also, nothing can match the warmth and love of mother’s cooking,” she signs off.

Blend sugar, oil and curd and beat them well. Add vanilla essence and sieve and add one cup of maida, baking powder, soda and a pinch of salt. Mix them well in cut and fold method. Add 2 to 3 table spoon milk (add little by little) to make the mixture smooth. Apply butter or oil to a baking tray or even an aluminium bowl. Dust it with flour and add the cake mix. Tap it well to remove the air bubbles.

Place a small stand in a thick bottom vessel or a non-stick pan and heat it in medium flame for 10 minutes. Keep the cake bowl on the stand and close the lid. Make sure the lid closes perfectly. Heat it for 35to 45 minutes in medium flame. Insert a knife to see if the cake is done. Cool it completely and enjoy the basic sponge cake.