Let me say it straight away— I am not a big fan of food shows. Cruelly aspirational, my kitchen looks nothing like the fancy ones on the show, and even if I were to follow the simplest of recipes, where the chef du jour is just throwing things together to create a fabulous dish, it would unfailingly turn into an unpalatable mess.

Being vegetarian by choice, I find it difficult to watch all that meat. But duty calls and as I dived headlong into the world of food shows on streaming platforms, I discovered the meditative calm of sushi, the anthropological evidence for Prometheus, the heart-breaking beauty of Havana, the unfailingly-disturbing Lord of the Flies and the joy of desserts. One of my favourite Bob Dylan lines suddenly popping up in the middle of a show was an added bonus. So here, in no particular order, are 10 shows you could check out to learn about the emotions, history and techniques of food. A mild Gordon Ramsay and Katy Perry are celebrity judges while the contestants are winners from previous seasons. If reality shows are your thing, you cannot go wrong with this veteran based on a British show from the 90s where amateurs and home cooks competed for the ultimate cooking prize. Season 12, which started to air on April 13, is into week 5 which is the Twists Week. When the hurlyburly’s done, when the battle’s lost and won, (cooking and restaurants always remind me of Macbeth), it is time to move to sushi. David Gelb’s documentary about an 85-year-old sushi master, Jiro Dreams of Sushi (2011) is beautifully calm. While the movie is all about the perfect cut, the freshest seafood, massaging the octopus for 45 minutes instead of 30, Jiro Dreams of Sushi also tells the story of fathers and sons.

Jiro Ono started working at the age of seven at a local restaurant. A formal portrait of young Jiro with his father holding his hand is all he has of his father, who seems to have lost his money and taken to drinking. Jiro says he did not go to his father’s funeral. Jiro’s elder son, Yoshikazu (50) who will eventually take over the restaurant, still works for his father. Jiro speaks of the kind of tough love he has dispensed to his sons (the younger son has opened his own sushi restaurant) to ensure they will be able to carry on. Even if you are not a fan of sushi, Jiro Dreams of Sushi, with its evocative music and dazzling photography is irresistible. 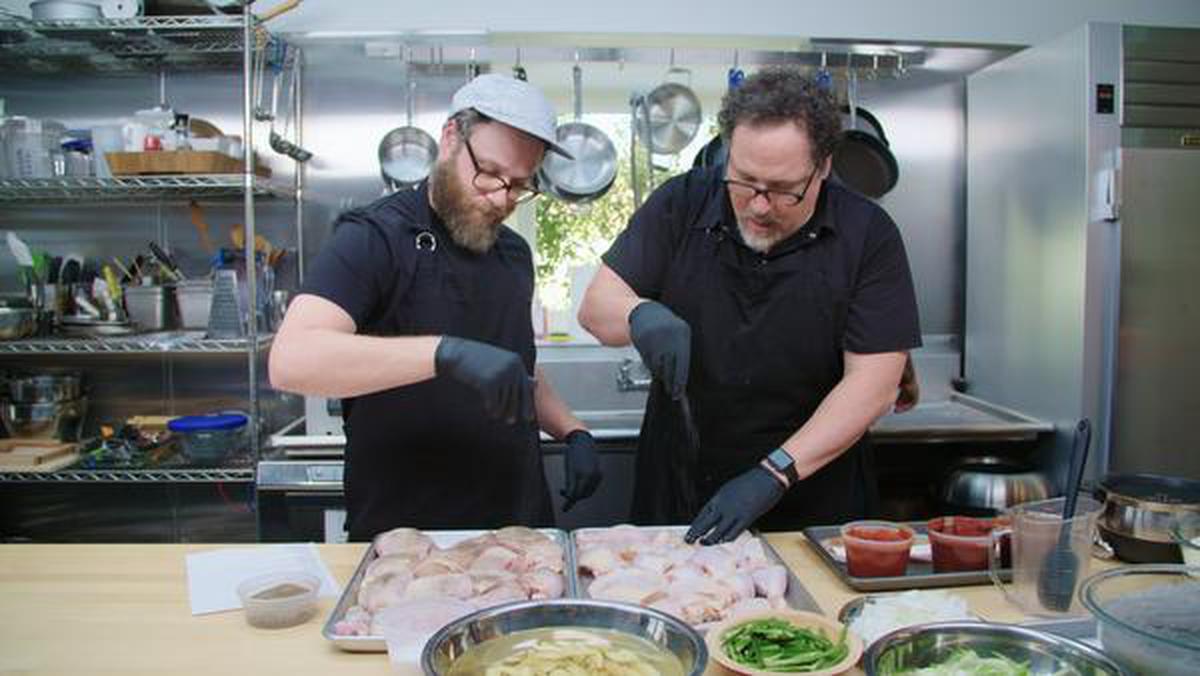 This is a delightful show for all nerds, geeks and comic-book fans. In 2014 Jon Favreau wrote, acted and directed Chef, a charming film about a successful chef who gives it all up to run a food truck. Roy Choi, the creator of the gourmet Korean-Mexican taco truck, Kogi, was consultant for the film and trained Favreau on all the ninja chef moves.

Incidentally, Favreau directed Iron Man, the movie that set the ball rolling for the gargantuan Marvel Cinematic Universe. The Chef Show which premiered on June 7, 2019 is a spin-off of the film and features Favreau and Choi experimenting with fun recipes (yes that grilled cheese is a star) and breaking bread with some of the biggest names in the entertainment business. It was fun watching them do a pepper pot for Gwyneth Paltrow (nudge, nudge) at Goop and have Tom Holland discuss his audition with Robert Downey Jr. 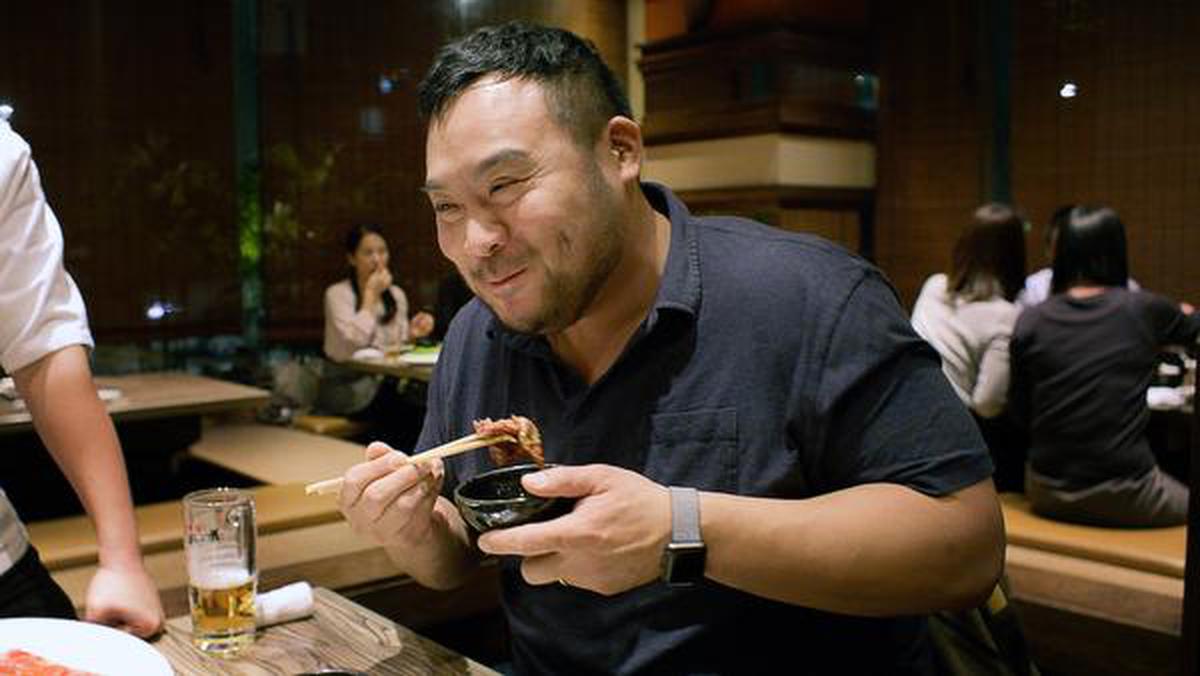 Chef David Chang uses popular food to dissect the concepts of travel, history, culture and the notion of authenticity. The first episode, which premiered on February 23, 2018 looks at pizza—from the uber traditional pizzas in Mark Iacono’s pizzeria, Lucali, in Brooklyn to a tuna mayonnaise one in Savoy in Tokyo and one from Dominos! There are also stops in Frank Pepe in Connecticut, Antillo’s pizzeria in Naples and Bæst in Copenhagen. 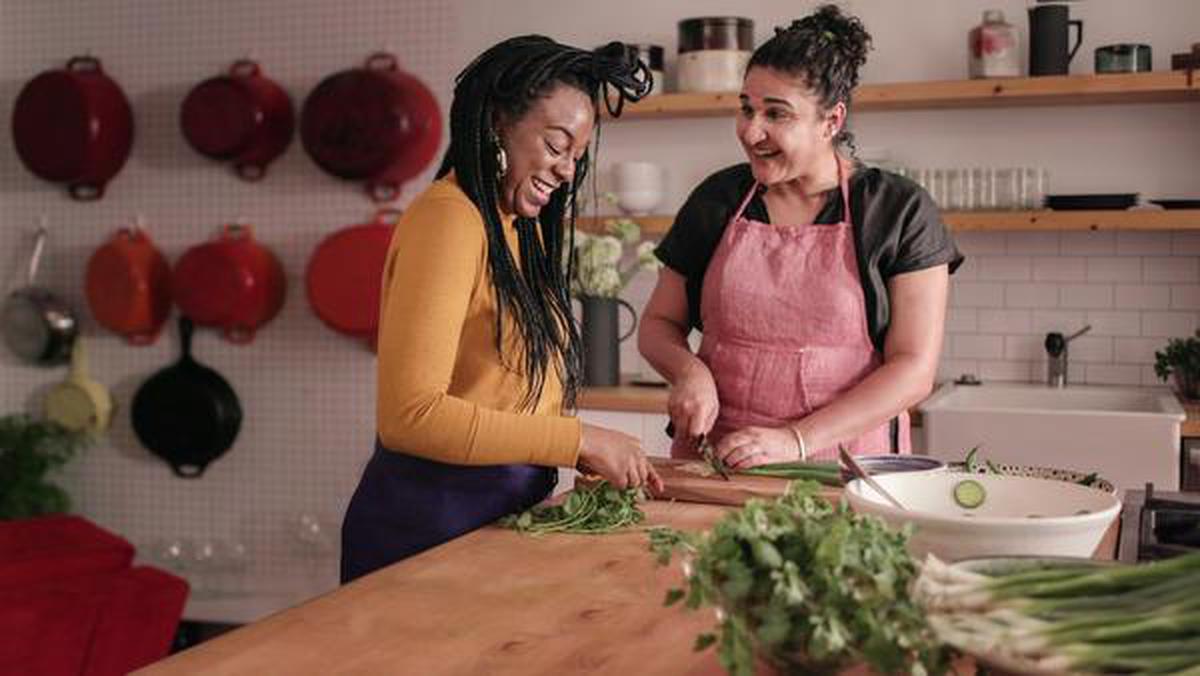 The four-part show, which premiered October 11, 2018, is based on Samin Nosrat’s bestselling cookbook, Salt Fat Acid Heat (2017). The show sees the chef, TV show host and food writer travel the world to investigate the four pillars of cooking namely salt, fat, acid and heat. She travels to Italy to explore fat and the concept of “noble meat,” Japan for salt, Mexico for acid and Chez Panisse (where she worked her way up from bussing tables to chef) for heat. Salt Fat Acid Heat is an interesting way of looking at food buttressed by a charming host and Instagram worthy locales. 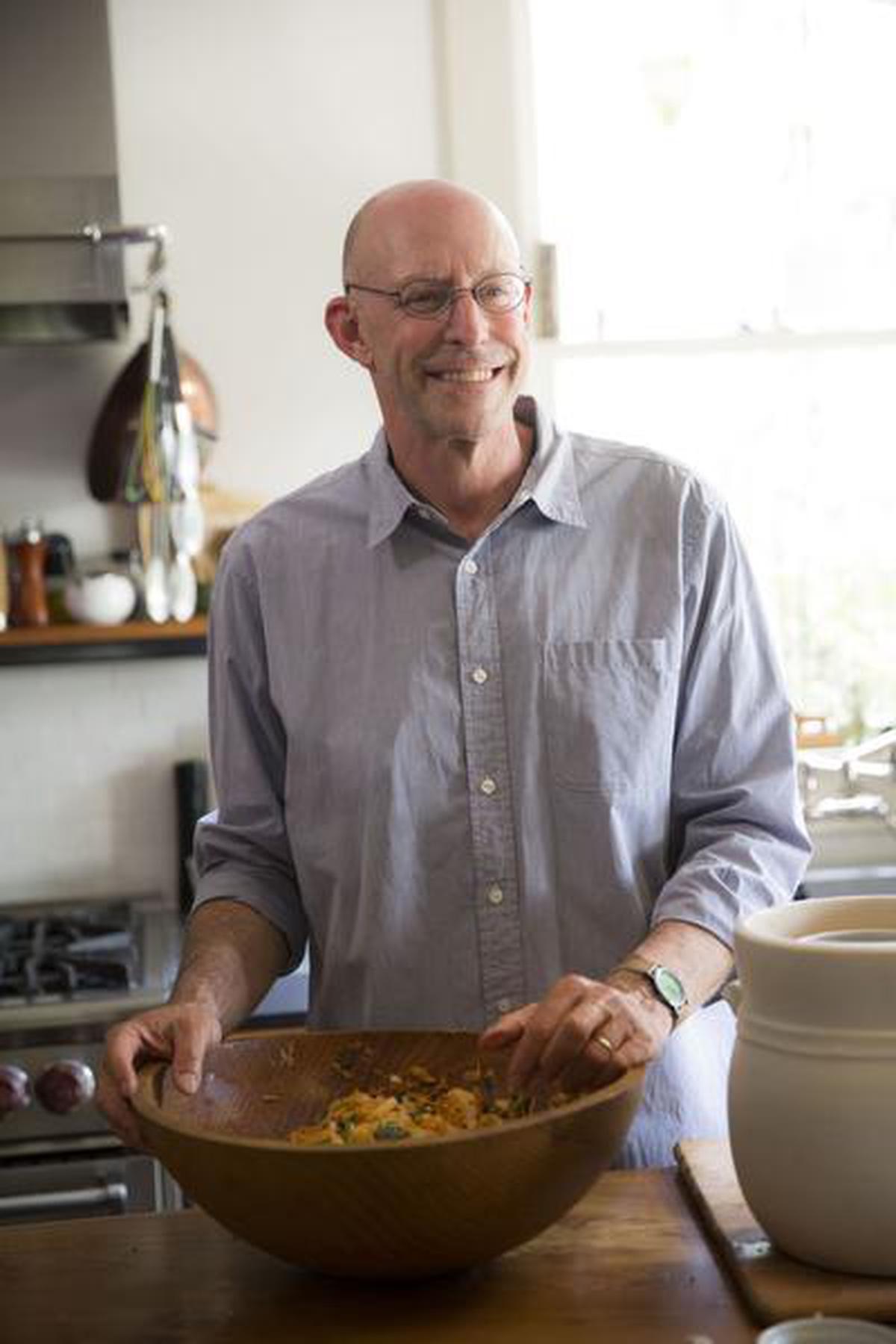 Samin Nosrat is described as “the chef who taught Michael Pollan how to cook” and features in Cooked, Pollan’s four-part documentary based on his eponymous book. The documentary travels the globe to explore the different aspects of cooking, which serendipitously correspond with the four elements—earth, water, fire, and air. Pollan, a writer (The Botany of Desire, The Omnivore’s Dilemma) activist and professor looks at the socio-cultural impact of food on our lives.

In collaboration with Oscar-winning filmmaker Alex Gibney, Cooked travels with an aboriginal tribe to hunt goanna (a type of monitor lizard) and tries to bridge the gap between our “meat transactions which are hidden behind feed lots and abattoirs” and our plates. There is also singer-songwriter James Taylor singing a song to his pig, Mona. Released on April 26, 2019, Street Food Asia looks at street food in Bangkok, Osaka, Yogyakarta (Indonesia), Chiayi (Taiwan), Seoul, Singapore and Cebu (Philippines). Looking at the bustling Mangal Chat Wale, the delicious kebabs at Karim’s and batura at Nand di Hatti in the Delhi segment, one can only imagine the silence on the streets now with the lockdown and the number of livelihoods affected. Truoc’s Snail Stall in Ho Chi Minh was a revelation of the number and variety of edible snails. 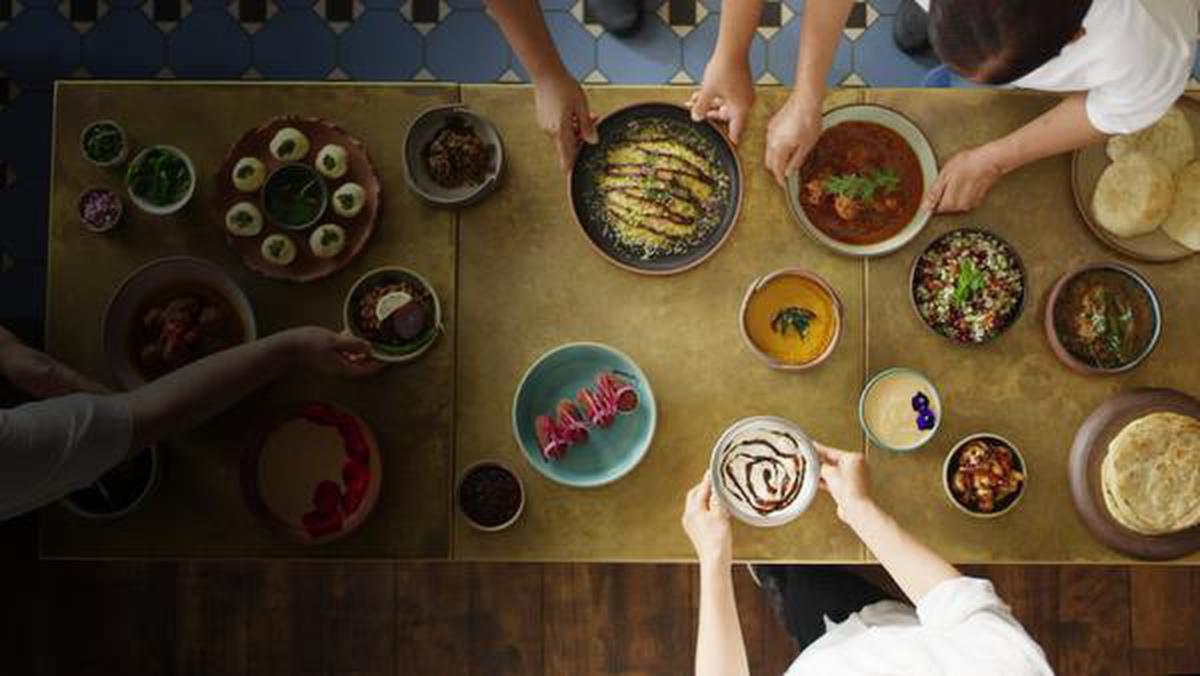 David Gelb, who also created Street Food Asia, considers Chef’s Table a spiritual successor to his Jiro Dreams of Sushi. The show which premiered on April 26, 2015, profiles professional chefs, their inspirations, dedication and determination to make it. Chefs from all over the world including Italy (Massimo Bottura), Argentina (Francis Mallmann), Sweden (Magnus Nilsson) Brazil (Alex Atala), South Korea (Jeong Kwan) and Russia (Vladimir Mukhin), are featured. Gaggan Anand and Asma Khan represent India though their restaurants are in Bangkok and London.

The episode featuring Christina Tosi, founder and owner of Milk Bar and creator of the infamous crack pie was a revelation into what drives these men and women to create delicious works of art. It also revealed the workings of a restaurant including the family meal, where the crack pie (a pie so good it is addictive) was born. Seeing David Chang (he hired Tosi and encouraged her to open the Milk Bar) gives that special joy of connections.

Eat the World with Emeril Lagasse Emeril Lagasse, the star of cookery shows in the 90s and nougties, travels the world with other chefs discovering the cuisine of different places. The entertaining and informative show was first aired on September 2, 2016. Eat the World… sees Lagasse in Sweden exploring New Nordic with chef Marcus Samuelsson, searching for the Shanghai soup dumpling with Mario Batali, exploring modernist cuisine in Barcelona with chef José Andrés, Jeong Kwan’s vegan cuisine in South Korea and Franco Pepe’s pizza with Nancy Silverton in the Campania region of Italy. In colourful Havana, Emeril and Aarón Sánchez taste the freshest of vegetables from urban gardens in an Ajiaco stew, a fine roasted pig with a cigar instead of an apple in its mouth—it is Cuba after all – and dine at a paladar (restaurants run out of homes). 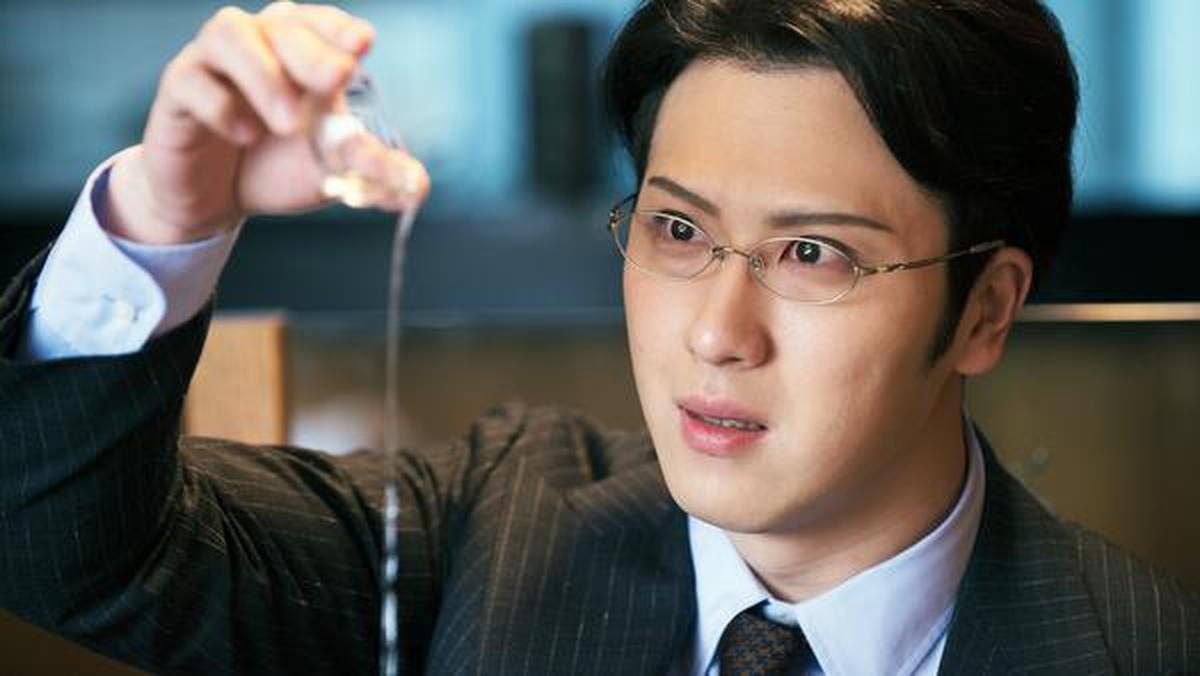 This is the perfect dessert to end a food show marathon. Based on the manga series, Saboriman Ametani Kantarou by Tensei Hagiwara, Kantaro: The Sweet Tooth Salaryman follows the adventures of Ametani Kantarou, (Onoe Matsuya) who quits his job as a programmer and joins a publishing house to indulge his sweet tooth. In the first episode, which aired on July 7, 2017, he zips through his sales calls to visit the Kanmidokoro Hatsune, a traditional sweet shop in Ningyōchō. There he samples anmitsu and is transported into dessert fantasy. His rhapsodies over the jelly, fruit, gyūhi and agony over choosing between white and black syrup are endearing.