Dr. Jenita Sereen, posted in COVID-19 fever clinic in Kulasekarapattinam in Kanyakumari, was finding it difficult to keep her children , aged seven and four years, engaged while she was away on duty. Whipping up quick but nutritious meals for them daily was also challenging with no help around. “But that was in April,” she says over a phone call. “Now, I am amazed at how my children have learnt to grow their own microgreens and include it in their food,” says the happy mother.

She confesses her own lack of knowledge about what could be grown in a small space and how it could be used, till a WhatsApp forward drew her attention. It was about a 15-day session for children between four and 14 years, to teach them easy techniques of growing microgreens with whatever seeds were available at home, and use them in recipes. Jenita promptly enrolled her son, Ryan Redwin, as she was promised it would entail simple activities for the children.

“I started with growing coriander and methi (fenugreek) seeds while attending the workshop and got the first crop of leaves before the workshop ended,” says Ryan. Every three days ever since, he has been experimenting and planting something different. “I am now growing fenugreek leaves, scallions, green gram, ginger, green peas, cumin and garlic,” he says. 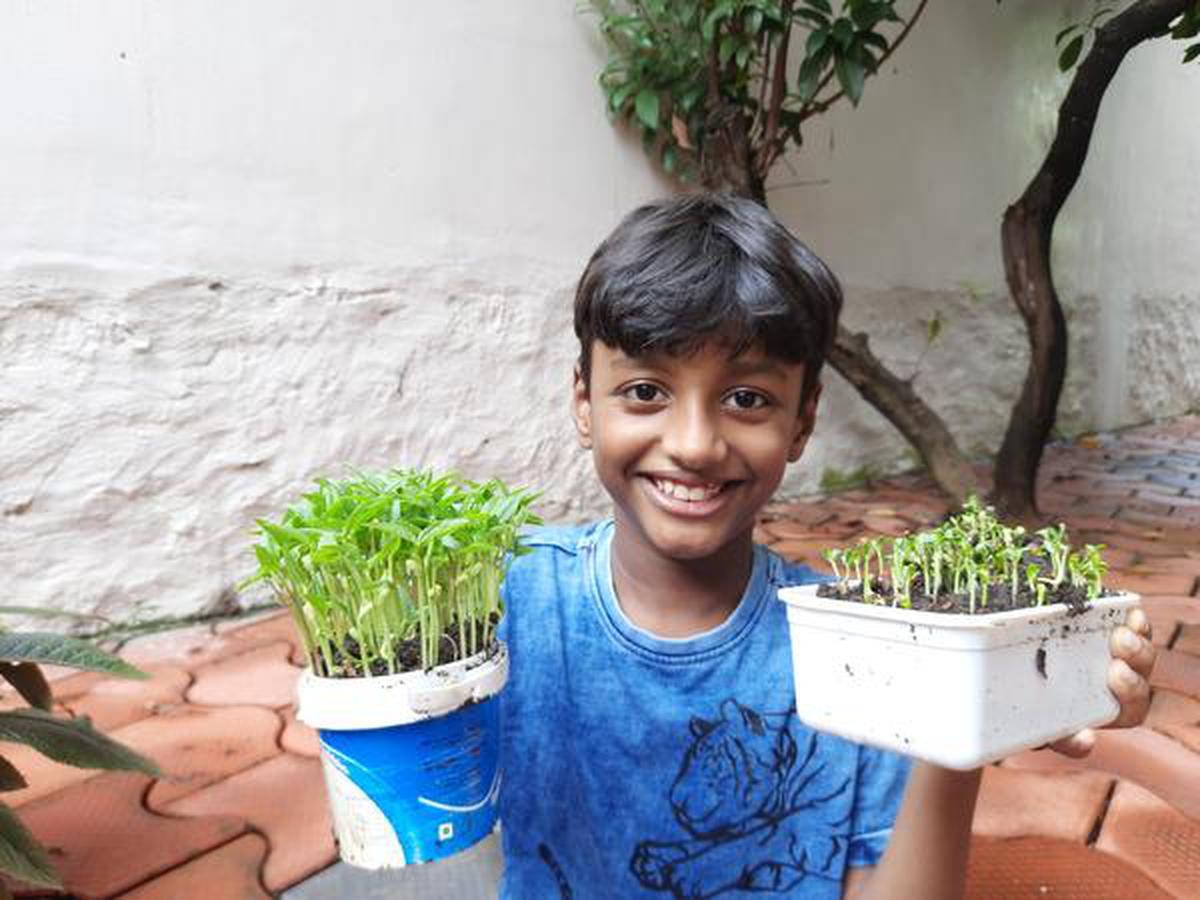 At least 700 children from across the country are now bound together in this microgreens project initiated by Chennai-based E-zone India, a company that does environment projects with and for schoolchildren. Founder Hafiz Khan says that in the last five years since he initiated this drive, his team would visit schools in Chennai for two months at the start of every academic year and teach the students. “It was not easy because not all schools gave us time and neither could we follow-up with the students’ progress.” The lockdown helped to convert the programme into live whatsApp video sessions with batches of 60 students from anywhere in the world.

Now with children at home, the team is able to continue the sessions over an extended period, run simultaneous multiple sessions with different batches and monitor every child’s progress. “They clear their doubts; solve puzzles and quizzes; maintain daily record with notes, photos and videos of their plants; make posters highlighting qualities of farmers such as hope, patience, humility, discipline and teamwork; implement the feedback we give them — all this collectively keeps them committed,” adds Hafeez.

Chefs in the making

The best part, says Jenita, is when the children bring their harvest to the dining table. “They neatly cut the leaves and put them into salads, scrambled eggs, samosas and sandwiches,” she adds. Eleven-year-old Tisya Subba Rao was with her grandmother in Mangalore when she started with three spring onion bulbs in a plastic bottle with some water and soil. “Earlier I never bothered to think how plants grow but now I enjoy observing them every day,” she says. Midway when she had to return with her parents to her home in Mumbai, her granny sent her daily photos. “I was thrilled when she told me she used the onions in khichdi,” says Tisya. She was motivated to re-enrol for another 14-days session and now grows mustard, fenugreek, mint, fennel and wheat among other plants. 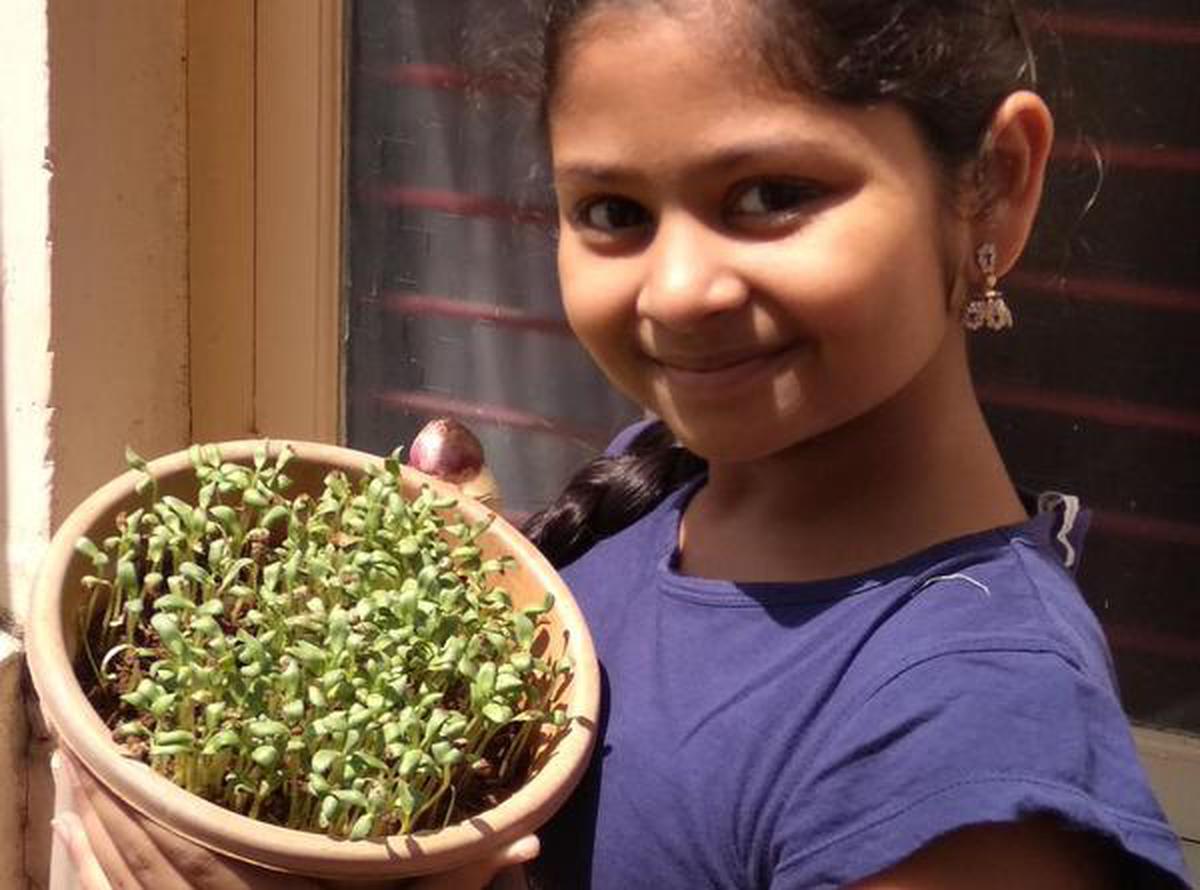 “From school we were taken on farm visits and shown how fields are prepared for sowing and reaping, but it is only now when I am growing my own set of plants I am able to understand how seeds germinate or photosynthesis happens,” she says. Now every window sill in the house is occupied by her tiny pots, ice cream boxes and used bottles, says her doting father Kalyon Subba Rao, himself an agro-forester.

“I mostly cut the leaves and sprinkle them on any soup or curry my mother makes. It also goes in idli/dosa batter or coats the bajji mix,” says Tisya. 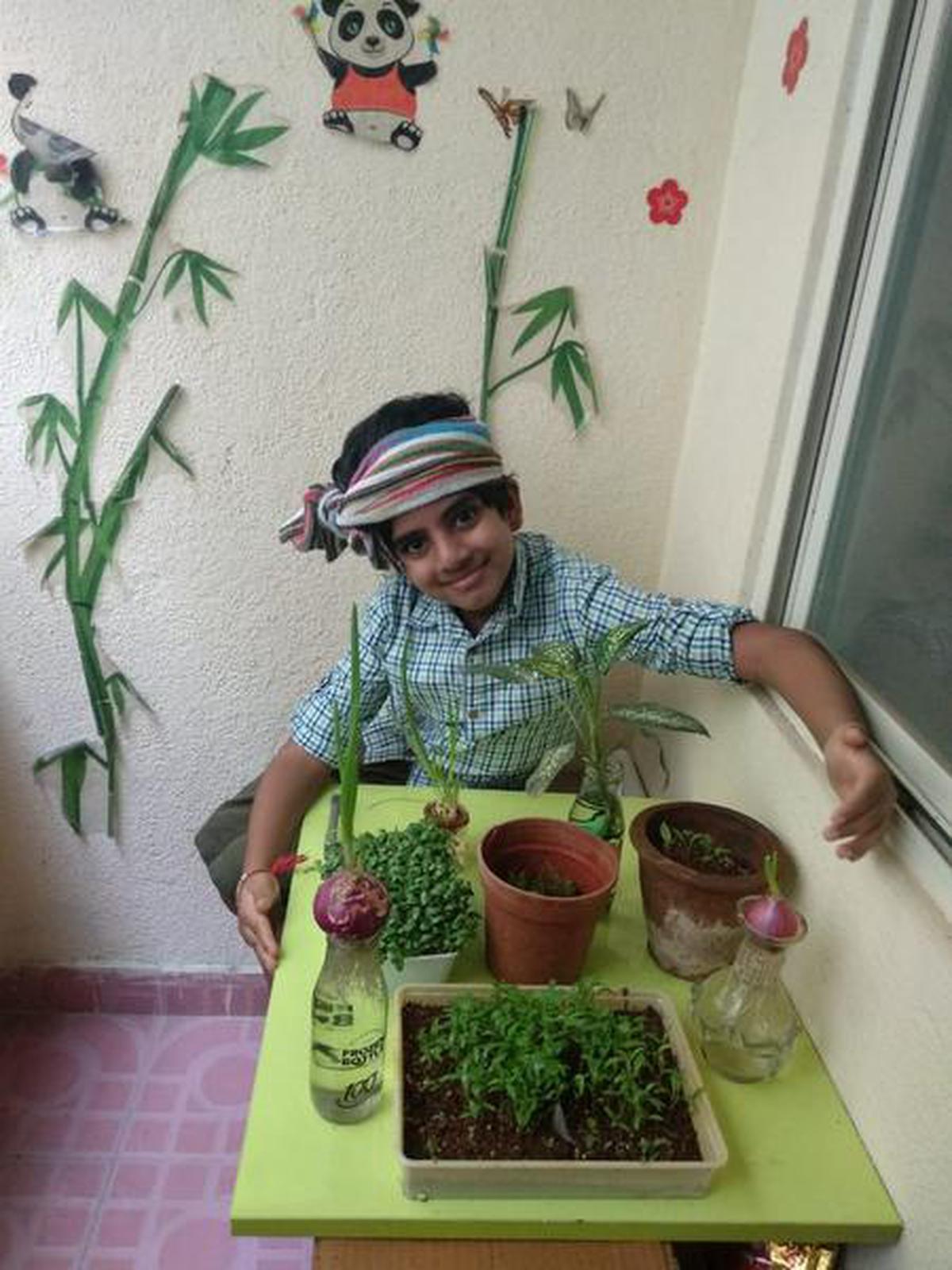 Aniruth Appar’s mother agrees as she talks of her nine years old son, who has also started growing capsicum, chickpeas, cumin, lemon alongside. But what gladdens Deebika Prasanna the most is how the little boy has turned responsible. “We live in an eighth-floor apartment in Bengaluru’s Electronic City and Aniruth without fail shifts the plants under sunlight and keeps a meticulous track of everything he is growing. He started with two pots of methi and now the entire house looks beautiful with greens. Whether I am making plain or fried rice or noodles, he will cut the leaves of the microgreens and sprinkle on every dish as taste enhancer,” she says.

Each batch of students go online for an hour at 10.30 am and 4.30 pm daily, and the sessions are moderated by Hafeez and his team. Even after the children finish their 15-days workshop, they keep in touch with the resource person. “We have collected feedback from parents and find that most children are continuing with their micro-farming and are passionately experimenting with different seeds available at home,” says Hafeez. He says what excites the entire family is that everybody is able to eat what they are growing, and though he has shared some simple recipes, children are themselves coming up with their own innovative and fusion recipes.

Beyond axone: a look at the fermented foods of Northeast India