At Delhi’s borders, vegetables, milk, even dry fruit and jalebis flow, as farmers talk of support pouring in by way of supplies

“Modi murdabad,” shouts a six-foot farmer and his companion, as they lift a bunch of methi each, shouting in protest, responding to the camera. They’ve just received their supply of vegetables for the night meal from a mini truck carrying greens brought in from the Beri Anaj Mandi in Jhajjar, Haryana. The arthi (middleman) says that everything has been donated.

At Delhi’s Tikri border with Haryana, today, methi and cauliflower seem to be the food for the day. Here, as life is lived out in trailers where upto eight people share space for the night, aggressive words like murdabad mix with gentler ones like seva, guru ki kripa, langar, bade dil wale (large-hearted). The farmers, mostly from Punjab, are gathered at Delhi’s borders to protest the three agriculture-related laws that will impact their livelihoods. Chhaas (buttermilk) that comes in barrels containing about 200 litres

At the receiving end

“In the beginning nothing had been decided about the food, so we brought our own: atta, dal, ghee,” says Bikramjeet, a 25-year-old farmer from Tarn Taran in Punjab, who helps his father on their fields of grain and cattle feed. “Then we got so much support from the people of Delhi, from the Delhi Sikh Gurdwara Management Committee, from the AAP, the neighbouring villages in Haryana. Thoda-thoda bhi aa raha hai; jada-jada bhi aa raha hai (things are coming in a little at a time and a lot at a time). We are very thankful to everybody,” he says, readying to camp on the Singhu border (with Haryana) for a year if necessary, and to live this life.

Food wise life has not been a struggle. Bikramjeet gestures for us to join him in a hot meal of matar–paneer and roti. There’s sweet pure-milk chai with rusk and bread on offer too. 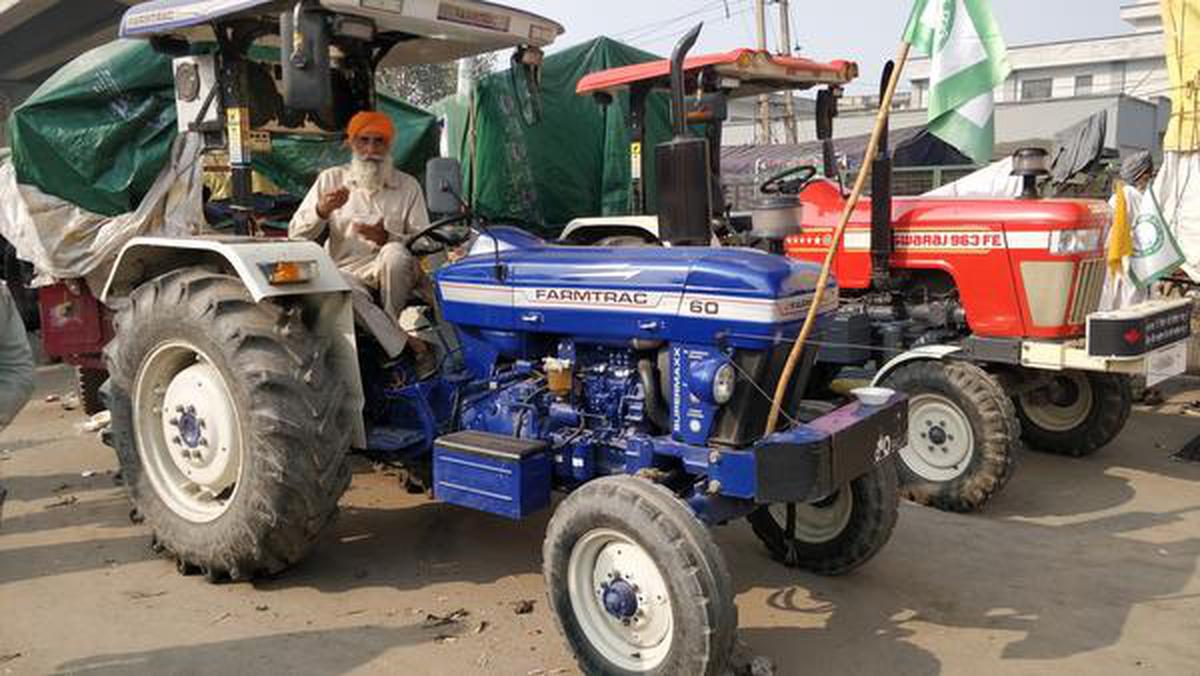 Both sites are serviced by a range of organisations, individuals, and informal groups, who have come out to support the farmers. A few langar cooks have travelled with them and some of the older women make food. Mostly though men cook themselves, shelling peas, chopping cauliflower, stirring cauldrons of milk, pounding the almonds for kheer.

There’s large consumption of seasonal fruit, tea and snacks are always available (Hovis and British bread seem popular), chhaas flows in the sunny afternoon. A class 12 volunteer from Barnala, volunteering with the Jamindara Student Organisation of Haryana, says, “We brought six barrels of lassi; then six more arrived. Each barrel has about 200 litres. The disposable glasses may get over, but the lassi won’t.”

Two men from Patiala who were coming to join the protest drove down through the night, their car loaded with boxes of water, when they heard the people at the Singhu border needed it.

Selling at the border

In Delhi, United Sikhs, an organisation that provides humanitarian aid, has also come in with water. “We brought only water, but people said take this too,” says Jaspal Singh, of the mathri and biscuits he has on offer. It’s almost a continuation of the lockdown spirit, when citizens gave of whatever they could.

Rohit Rathee is one of those who provided food for migrants. He works with an MNC in Delhi, but is here because his grandfather was a farmer: “Hum dil se kisan hain (We’re farmers at heart),” he says. Supplies come in from Kaithal, Haryana, and are cooked on site. His team has made arrangements for gas cylinders, but there’s also a lot of food being cooked on wood fires. At a meal of kadhi-chawal, there may be about 200 kg of rice, 50 kg of besan and 300 litres of milk used. It feeds about 2,000 people.

What’s different between the two borders is that Singhu seems to have more, their cups quite literally overflowing. Unfortunately, the garbage is piling up — plastic cups and plates thrown in front of the guru ka langar offered by the Bangla Sahib and Rakab Ganj Sahib gurudwaras. People sit in neat rows on the road, on long mats, as simple food is ladled out. Even as the Nihang Sikhs cordon off a section, restricting those without a head covering or with shoes to enter the cooking space, their wood fires inviting people to stand around and stare longingly, everywhere else, people offer of the plenty: a jalebi, a banana, gobhi pakora.

At a long table, a bunch of about eight school boys stand, one with his voice not yet broken, calls to people to have some poori-aloo. They’ve come from the Pratap Sports School, Kharkhoda, Sonipat, where they study wrestling. A parent who owns a ‘gaddi’ and their bulked up teacher have accompanied them. They’ve commissioned a halwai to cook for a 1,000 people daily.

“Everyone felt that we should be there for the farmers,” says Vijay Dahiya, who works with the electricity board and has taken leave to do this, just one of the many who are showing solidarity with the cause.

The men from the crowd (and there are mostly men) are careful to point out that everyone from every community is there to offer food and other forms of help.