This Christmas, try and snag these unusual limited edition cakes

Deck the halls with boughs of holly, stollen and black rice fruit cakes this year

The carols may be virtual, the presents doused in sanitiser and your parties on Zoom, but at least there will always be cake.

If you have not already stocked up for the season (or, let’s be honest, have already scarfed down your preliminary stash of plum cake to self-soothe with its glorious trifecta of rum, sugar and Christmas cheer), try and snag these unusual limited edition goodies.

Last year German baker Dina Weber shipped out about 40 loaves of stollen from her baking studio in Mysuru. This year, she is sending out 400 — so far.

“A lot of people know us from social media, and ask if we can send them our products,” says Dina over phone, adding however that she was hesitant to courier breads and cakes, which may not travel well. Stollen was a perfect solution (₹ 1,100 for 700 grams).

“It is a traditional German bread, and supposed to be kept for up to a month. It’s dense and heavy, so perfect for sending to other cities,” she says. The festive, cake-like bread, originally from Dresden, is a Christmas treat, and often features a rich rope of marzipan at its heart.

“It is luxurious, with special ingredients,” says Dina, explaining how they started soaking the dry fruits in rum in October, and the butter for the stollen is infused with spices for 24 hours, before it is incorporated in the dough. Inspired by the stollen made in Ore mountain range, in East Germany, her version includes almond flour, soaked in milk, overnight. The process does not end when the bread is pulled out of the oven, wrapping the bakery in its heady scent. “After baking we dip it in melted butter, and then coat it in icing sugar, says Dina, adding, that keeps it moist, but also makes it last longer.

Sapa began as a small outfit in Mysuru four years ago, when Dina began making breakfast, featuring salads and sourdough, for yoga students. “I was backpacking in South East Asia, and when I came to India, I met my husband who is Tamilian,” she says, explaining that they spent one-and-a-half years working in organic farms and volunteering at food projects across the country before deciding to settle in Mysuru.

This March, Sapa formally launched as a bakery, and given the enthusiasm with which it has been received, Dina is cautiously considering expansion. Meanwhile, she and her three-year-old are busy pasting glitter on cards for her family in Germany, to pack into Christmas parcels along with her Indian stollen.

Spirit of the earth

“We can’t really call it a traditional Christmas cake,” says Jayanthi Somasundaram from Spirit of the Earth, hesitantly. Nevertheless, their vegan version, made with black chak hao rice, is an exuberant nod to the festive season.

An initiative by Aim For Seva, the rice is grown from heirloom seeds on an organic farm in Manjakkudi, Tamil Nadu. The farm’s main goal is seed conservation, and so far the group has collected more than 200 types of heritage rice from farmers across the country for their bank. 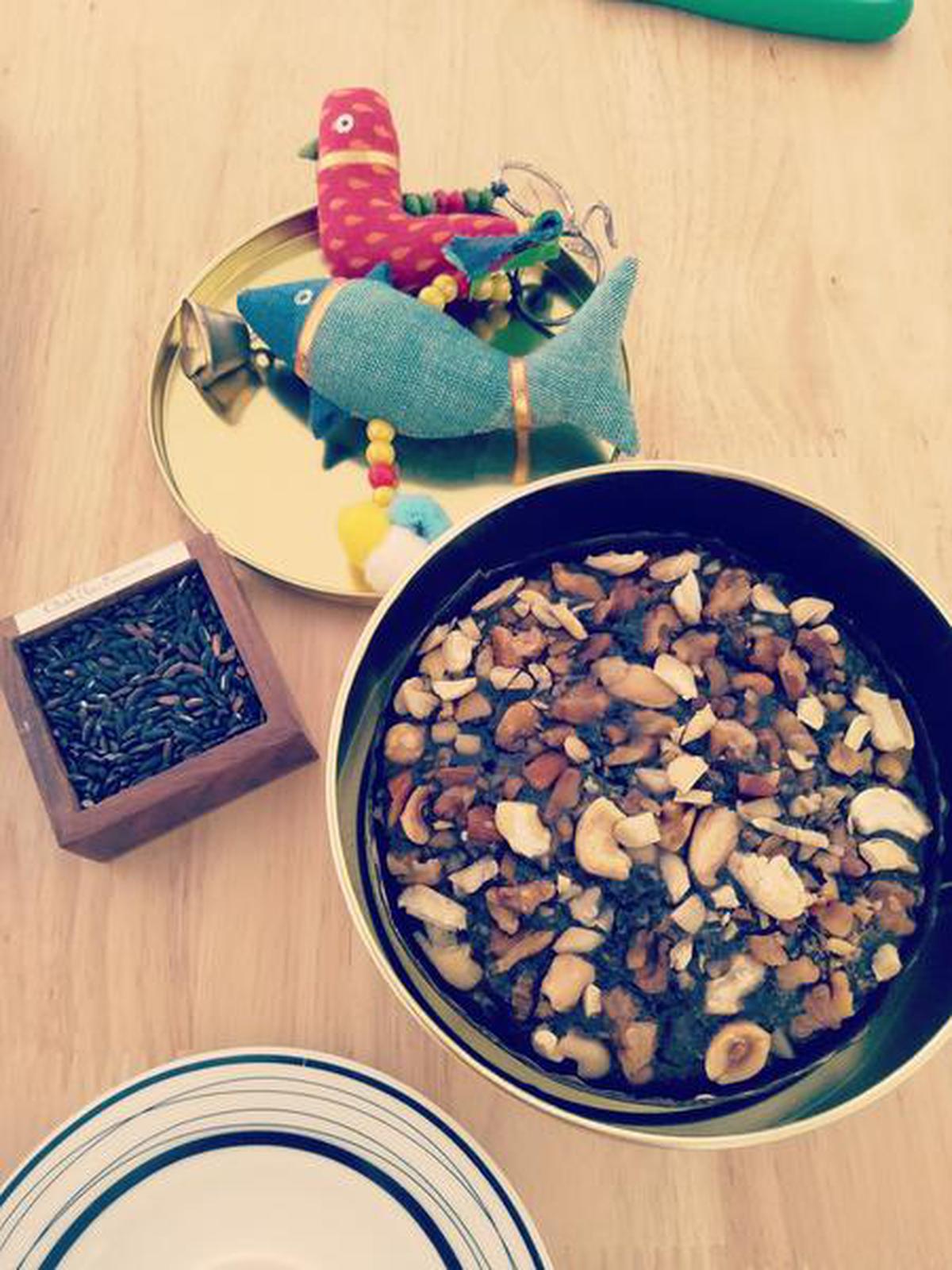 A large part of their mission is to encourage customers to experiment with different varieties, to understand how versatile they are. “We have been working with Senthil Kumar Balu of Wholesome Rhapsody experimenting with rice flour-based cakes,” says Jayanthi, adding that they started by making cupcakes with black and red rice. After many trials they realised the Manipuri chak hao, with its naturally sweet, nutty notes, worked best.

In July, the work on a fruit cake for Christmas began. “Black rice doesn’t have gluten, so it did not have that spongy texture. It was like a fudge, thick and heavy at first,” she says, adding, “We played around with ingredients. Added palm and coconut sugar, used coconut cream. We added fruits…” After seven versions, they found a winning formula (₹1,100 for 400 grams). The catch? There are only 100 cakes being baked this year, so you better move fast.

Fans of the magical garden café at Naturellement in Auroville may not be able to bask in sunshine and espresso this year, with COVID-19 making travel challenging. You can, however, order yourself a slice of signature Naturellement cheer. Their traditional European Christmas cake, fragrant with spices and heavy with fruit, can be steamed into a pudding, and served with brandy butter (₹ 750 for 650 grams).

Order online on auroville.com. Or prebook a cake at the Naturally Auroville Boutique on Khader Nawaz Khan Road on 9840525608.