On a morning walk around their gated community in Gandipet, Hyderabad, Madhavi and her husband Venugopal Vippulancha were heartbroken to see a pile of disposable plates and cutlery dumped at a street corner. Adding to the misery of the sight was the non-biodegradable waste (milk sachets, disposable plates) that cows were feasting on. The couple started to think of an alternative option, keeping in mind the harmful effects of eating from low-cost plastic plates. This led them to consider healthy and environment-friendly alternatives, like plates made from leaves of banana or palash trees. Venugopal says, “We call them vistarakulu in Telugu. They are basically dried leaves stitched together with thin dry twigs. Though they are still available, the usage has come down. With all events big and small turning to buffet options, leaf plates were gradually replaced by sturdy, leak-proof paper plates with plastic coating and colour, with harmful chemicals.” 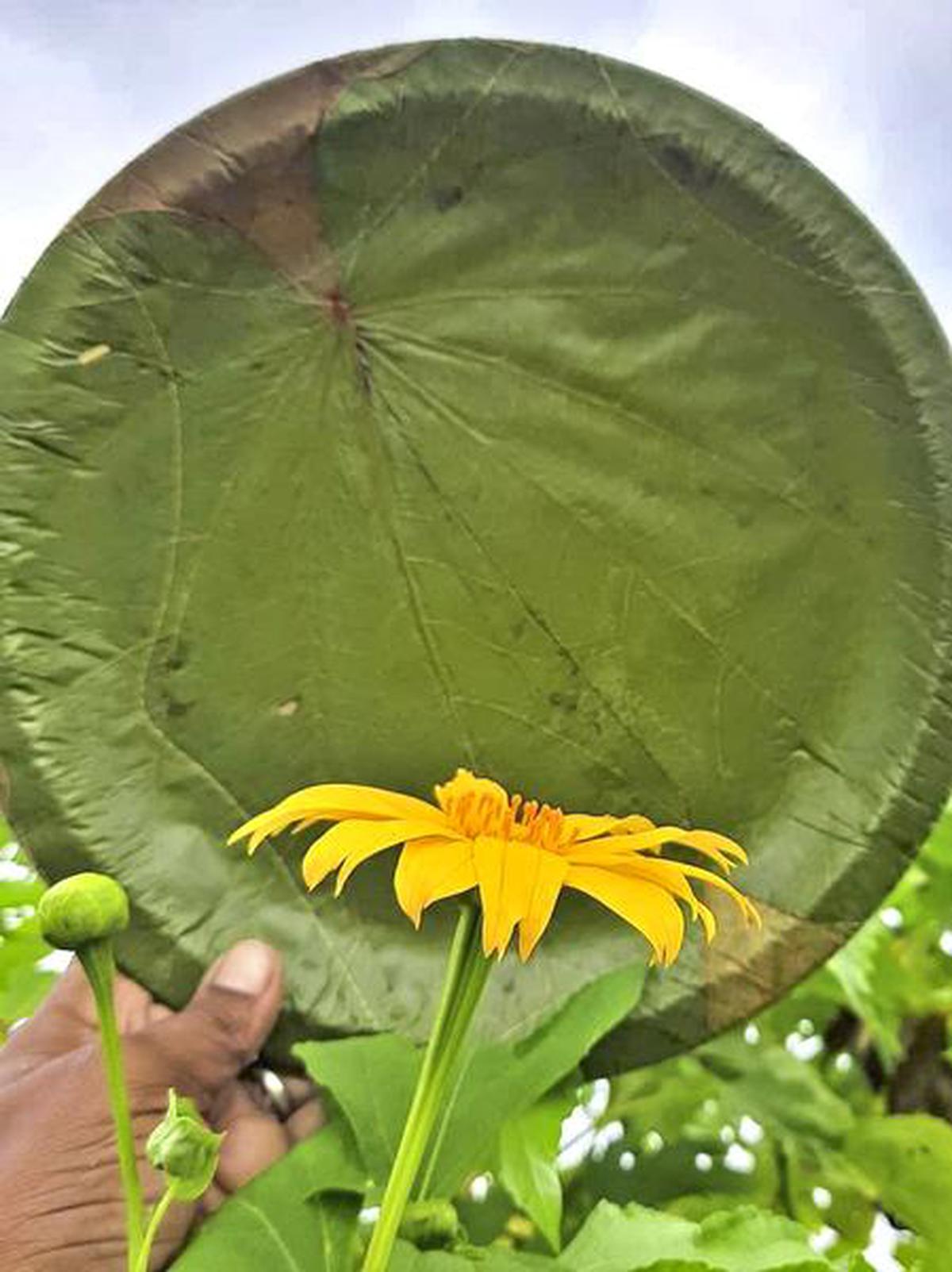 The couple decided to bring the trend of leaf plates back and named their project ‘Vistaraku’. They started making frequent trips to their farmhouse in Siddipet on being urged to do so by Madhavi’s mother. Venugopal says, “It was because of my mother-in-law that we frequented the farm and started planting organic fruits. Then we noticed that our farm was well endowed with palash (flame of forest tree) whose leaves are traditionally used to make vistarakulu (leaf plates). Our caretaker dismissed the tree calling them useless because the fallen leaves needed to be constantly cleared. We started collecting and making plates out of the leaves as they fell. They couldn’t be stitched; they were too small to be used for meals but were ideal for snacks and breakfast.” 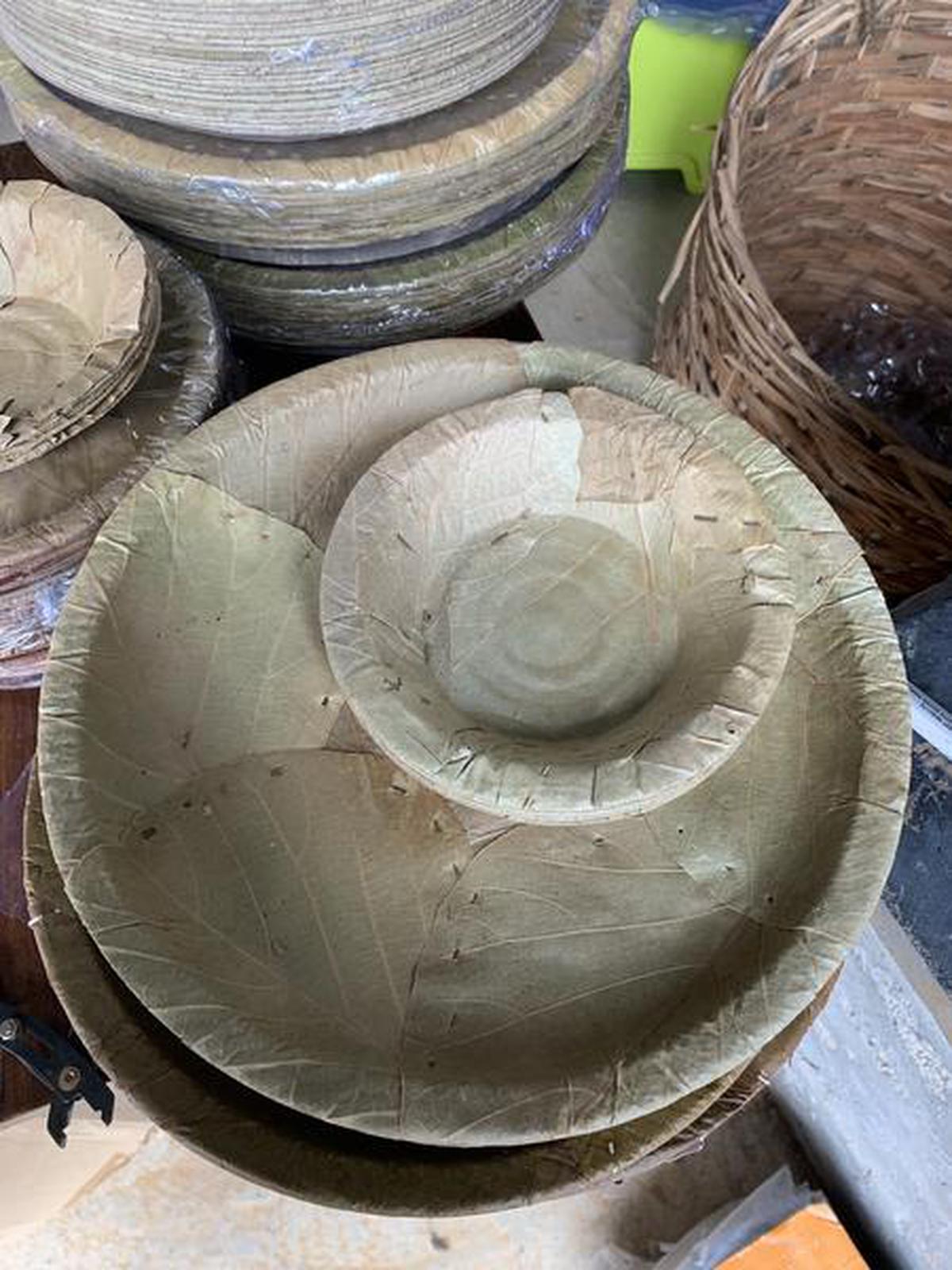 Being a member of organic farmer and food groups helped Venugopal and Madhavi understand the advantages of leaf plates. Naturopaths on the groups discussed why cooked food, especially cooked rice and raw meat, was traditionally covered with palash leaves.

“Apart from adding flavour to cooked food, palash is also known to have insect repellent properties. Our search took us to a community that helps tribal leaf cultivators in Odisha. The leaf, which the community harvests, is called siyali. Tribal women trek into forests in groups to harvest them. The leaves grow as climbers and are a protected species. Once collected, these are sold in the market to be made into plates and bowls,” says Venugopal.

He is thankful for the reach through organic food groups on Facebook. One such contact put them in touch with a supplier who works for the welfare of the tribal communities. Their next step was to find machines that convert these leaves into sturdy plates. A mechanical engineer, Venugopal says that the machinery was available. “Even though operating these machines is no rocket science, there are no takers. Reason being there is no steady supply of leaves. And if the machines break down due to minor glitches, the service team takes at least a month to attend to them. Since we had sorted the problem of steady leaf supply, I put my engineering skills to practise and worked on the machines to fix them. Soon, we started making vistrakulu with help from two girls from the village; now we have a team of six.”

The process of making these plates is simple; stitched leaves are placed on squares of hard brown paper with a polycoat. They are then put in between heated frames of desired size and shape, with the leaf facing up. “The temperature is anything between 60-90 degrees centigrade. Pressure is applied for about 15 seconds. The heat makes the fine sheet of plastic on the hard brown paper act as gum that makes the leaf stick to it,” explains Venugopal.

The couple began supplying to parties held in their Gandipet society and family functions. “That was the only way we marketed Vistaraku. Friends and family started posting on social media about the plates, and we got a good amount of traction. Until then, we were just producing and not knowing where to sell them. Surprisingly, there are a lot of enquiries from abroad about our product.”

They can be found on FB as Vistaraku or visit their website: www.vistaraku.co.in

Will we face a chocolate shortage?