The recent application for a GI tag for palm jaggery produced in Udangudi, Thoothukudi district, has refocussed attention on this ancient, natural sweetener that was once exported to Malaysia, Singapore, Sri Lanka and Britain.

Commonly used as a kitchen ingredient and a component of Ayurvedic medicines in southern India, in its heyday, Udangudi jaggery was traded in nearly 500 shops in the nearby market towns of Madurai and Tirunelveli.

“Udangudi palm jaggery (also known locally as Udangudi panangarupatti) is a product of its unique topography. Due to low rainfall, the red-dune sand in this area has less moisture. So the sap of the palmyra trees is more viscous. And unlike other regions, where the earthen pots to collect the sap are coated with industrial lime to prevent fermentation, here seashells dissolved in water are used as the liming agent. This gives the jaggery a salty aftertaste,” says Usha Raja Nanthini, associate professor and head, Department of Biotechnology, Mother Teresa University (MTU), Kodaikanal.

The academic is a key member of the team along with R Srinivasan, secretary, Tamil Nadu State Council for Science and Technology, and Tirunelveli District Palmyra Products Cooperative, that applied for GI certification for the traditional product earlier this month.

Palm growing has been prevalent in this coastal region especially among the Nadar community, once associated with the Chola rulers in the 12th Century, when they migrated down South.

The palmyra forests made toddy and non-alcoholic palm sap (padaneer) tapping a key profession in Thoothukudi district, and records seen by the GI tag applicants also mention the export of Udangudi palm jaggery on March 7, 1526, by a Portuguese trader through the old Kayal harbour.

An era of remixes

At present, Udangudi palm jaggery employs around 10,000 families in a cottage industry that is completely reliant on manual labour.

“Unlike coconut trees that start bearing fruit within four years, palmyra needs at least 15 years to become useful to the farmer. The trees that are being tapped today are all above 20 years’ vintage,” says Winston Prabhu Immanuel, a 37-year-old palmyra farmer and jaggery manufacturer based in Udangudi.

Getting a GI tag would be most helpful to people like Winston, who set up his website udangudikarupatti.com to supplement his family-run store after jaggery adulterated with cane sugar crystals started flooding the market in recent years.

Railway with a syrupy past

While genuine Udangudi palm jaggery costs ₹380 to ₹400 per kilogram, the remixed ‘originals’ are priced between ₹140 to ₹150 per kilogram. “Going online has helped us find new customers, but the business is still focussed on offline trading,” says Winston, who sells around 100 kilograms of jaggery per month at his store in Udangudi, mostly to herbal medicine makers.

This year’s lockdown has hit production mainly because of the restriction on inter-State movement of labourers. “Palm tree climbing is a traditional skill that has died out in our area; we have been using climbers from Kerala for tapping the sap during the months of March to August, which has not happened this year due to the lockdown,” says Winston.

A climber can scale up to 30 to 40 of these towering palms in a day, first to place the earthen pot at the shaved meristem at the apex of the tree the evening before, and then back the next morning to collect the sugar-rich sap.

“Climbers can collect up to 500-1,000 litres on a good day. The juice is boiled in a wide-mouthed iron skillet, on an open fire stove, with dried palmyra branches being used as firewood,” says Winston.

The syrup is reduced to a thick liquid after nearly five hours. “One needs to monitor this step carefully, because overcooking can burn jaggery,” he adds.

The hot syrup is poured into coconut shells, with a large muslin sheet acting as a strainer. Once cooled, solidified jaggery comes away easily from its mould in a semi-circular dome.

Fresh jaggery is crumbly, and dissolves faster than older stock, says Winston. “Storing the jaggery isn’t easy, because it melts quickly in the heat. So we build loft-like sheds and ensure that the jaggery mounds are kept at room temperature there until they are ready for sale. Even then, after six months, a 5000 kilogram load will weigh only 4500 kilos, because of the loss of moisture,” he says. 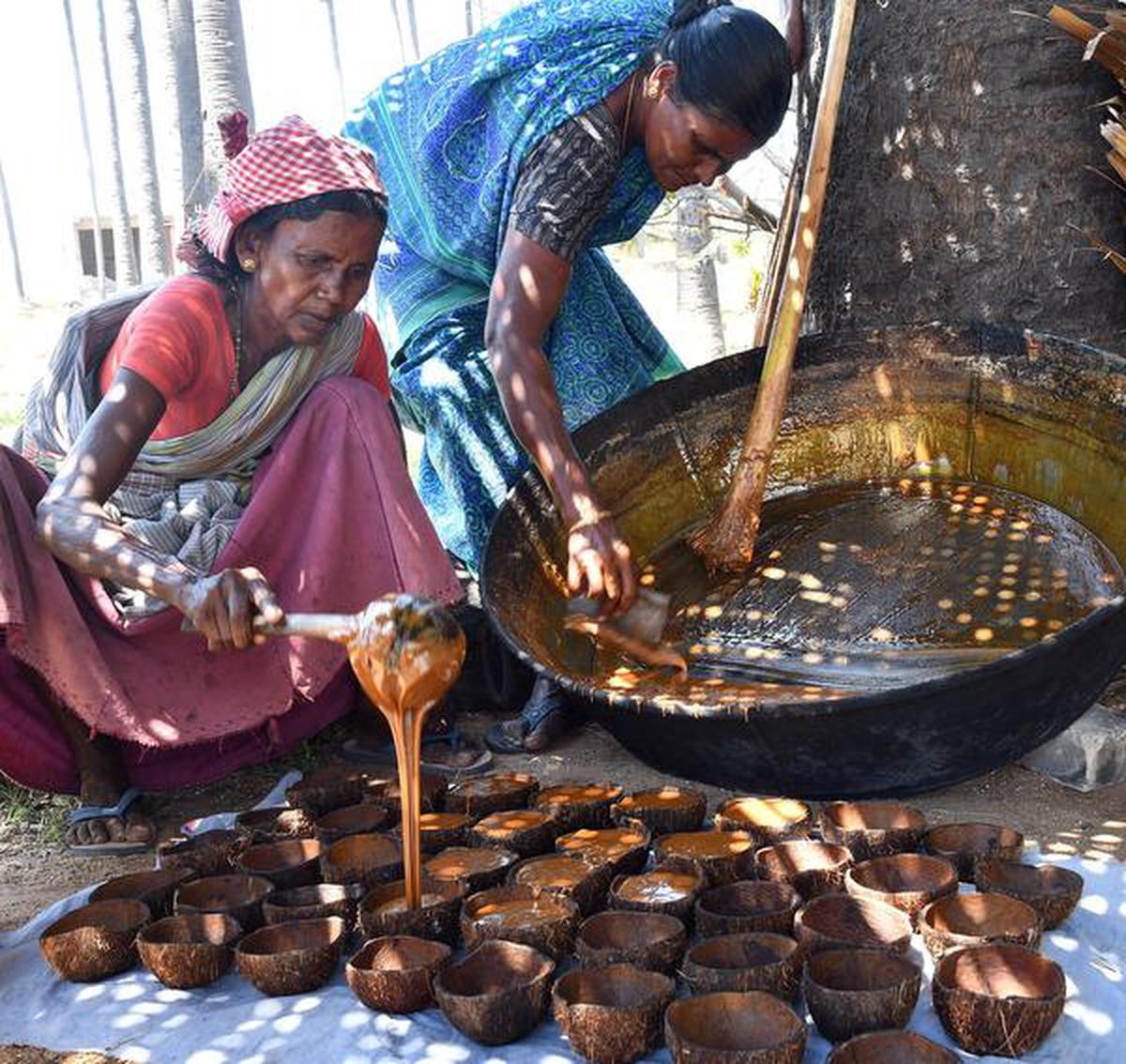 What can a GI tag do to improve Udangudi palm jaggery? “Udangudi jaggery is getting adulterated with other varieties and being sold as the real thing,” says Srinivasan, of the Tamil Nadu State Council for Science and Technology.

He adds, “a GI tag will help the cooperatives from 15 villages in and around Udangudi that are involved in the production of the jaggery. It will be a mark of standardisation.”

But it may not be the only thing that can revive flagging sales, as can be seen in the case of Kerala’s Marayur sugarcane jaggery that earned a GI tag last year. While the tag ensured a price of ₹70 per kilo, besides bulk orders from foreign buyers and luxury hotels, inadequate marketing and the lockdown led to costs getting slashed to ₹58 per kilo. Jaggery makers from Tamil Nadu have been unable to travel to Marayur, as a result of which many sugarcane fields have remained unharvested.

With inputs from Giji K Raman

Buttered buns and biryani buckets to beat the lockdown blues