A week from now as restaurants open in Bengaluru after a gap of 70 days, two of the city’s iconic eateries, 77-year-old Vidyarthi Bhavan and 96-year-old MTR are getting welcome customers.

“I have been in touch with friends who are doctors and they have advised me on seating requirements,” says Arun Kumar Adiga, the third generation owner of Vidyarthi Bhavan. “I am happy we have breathing time to put arrangements in place as the Ministry of Home Affairs has announced the opening up of hotels on June 8.”

Arun had initially thought of glass partitions on each table. It was scrapped as it made the furniture heavy and difficult to move. “We have to plan for different numbers of patrons including families of four and six.”

Arun checked the net for post-lockdown hotel seating options. “My friends sent me some options already in use in South Asian countries and Paris. They were basic, for temporary use, and were made from re-used pipes and plastic sheets. I wanted a long-term option.”

While the basics such as hand sanitizers and masks (for people waiting outside) are already in place, Arun is toying with the idea of using the partitions as well. 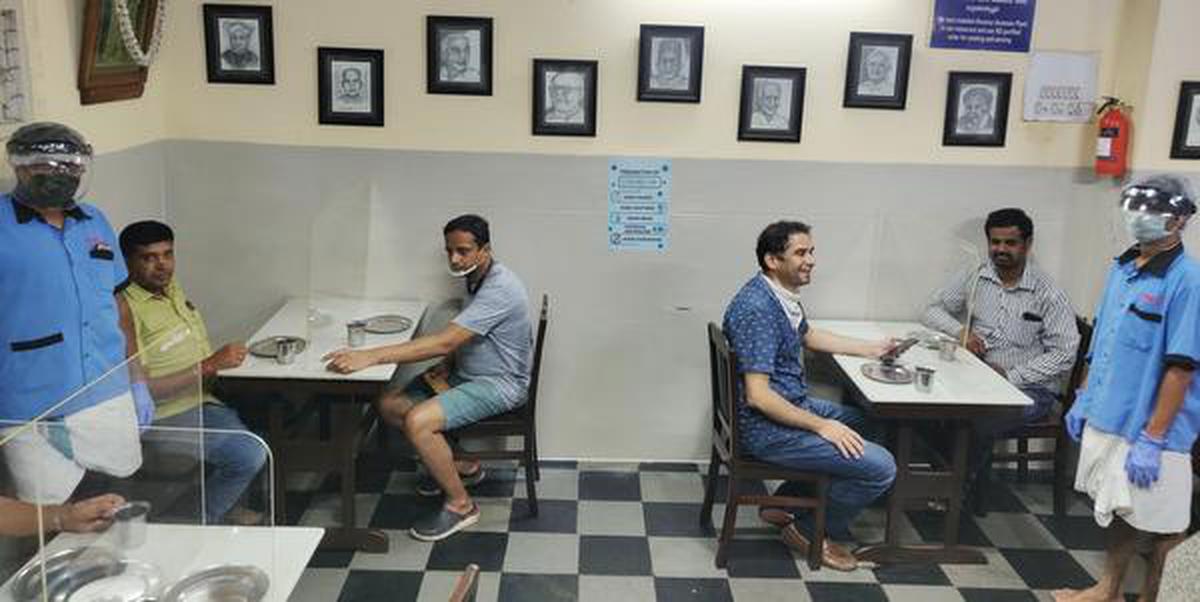 “We have a simple menu with six items, so there are no menu cards. We are thinking of using the partition space to share dos and don’ts for COVID-19. We can later put up quotes from poets and litterateurs from Karnataka. It will go well with the sketches we have on the wall.”

Speaking of the menu Arun says, “We will start with dose and idli and gradually include masale dose, saagu masale, idli-vada, rava vade, poori saagu and uppittu.”

Mavalli Tiffin Room (MTR) on Lalbagh Road has been busy with take-away and home-delivery for the last two months. The restaurant is all set to welcome patrons on June 8. “Every precaution will be taken from temperature checks to hand sanitizers at the entrance,” says Hemamalini Maiya, one amongst the third-generation siblings, who with Vikram and Arvind took over after the death of their father, Harishchandra Maiya in 1999.

“Only 100 people will be served on the first floor. There will not be service on the ground floor and the coffee corner.” The popular breakfast-tiffin menu with rava idli and masale dose will be served.

“Our thali has nearly 25 items, we might scale it down. We will not serve raw foods such as kosambri and salad. We are considering including pepper and ginger rasam and vegetable soup.”

Hemamalini says 60 to 70 % staff has returned from their hometowns. “We have special vegetable-and-fruit cleaning routines. Apart from salt for certain vegetables, some fruits will be washed with sodium hypo-chloride in small quantities as advised by doctors.”

Bee keepers to the rescue