Want a traditional Onam sadhya? Here’s what you can order this year

Despite the pandemic bringing about lockdowns and physical distancing, restaurants are innovating to ensure that customers enjoy sadhya this year

For Malayali families, Onam sadhya is a tradition. Eaten on banana leaves, the 22-course vegetarian meal has moved from homes to restaurants to large wedding halls, served by caterers. This year, because of COVID-19, sadhya is home again.

Roshina Tharakan of That Mallu Joint, in Chennai, says that Onam is their busiest time of the year: the 60-seater restaurant had 400 people lunch with them on Onam day last year. This year, maintaining 50% occupancy means they plan to focus more on takeaway and delivery. They are also spreading it out through the week, so they can meet the inevitable demand.

“We are serving sadhya till September 2. So far we have sent out around 60 sadhya boxes (₹499),” says Roshina. Since it is a course by course meal that is laid out left to right, with a progression from light dishes like paruppu to heavy ones like pulissery, the parcels will be labelled. “The rice will be packed in banana leaf, so all you have to do is roll it out and serve the accompaniments on it,” she adds.

Though it is the same menu every year there is always a clamour for sadhya. It is an emotion, a novelty for those trying it for the first time, and it is also one of the largest vegetarian meals served once a year, says Zachariah Jacob, who along with Thomas Fenn, co-owns Mahabelly in Delhi and Gurugram. 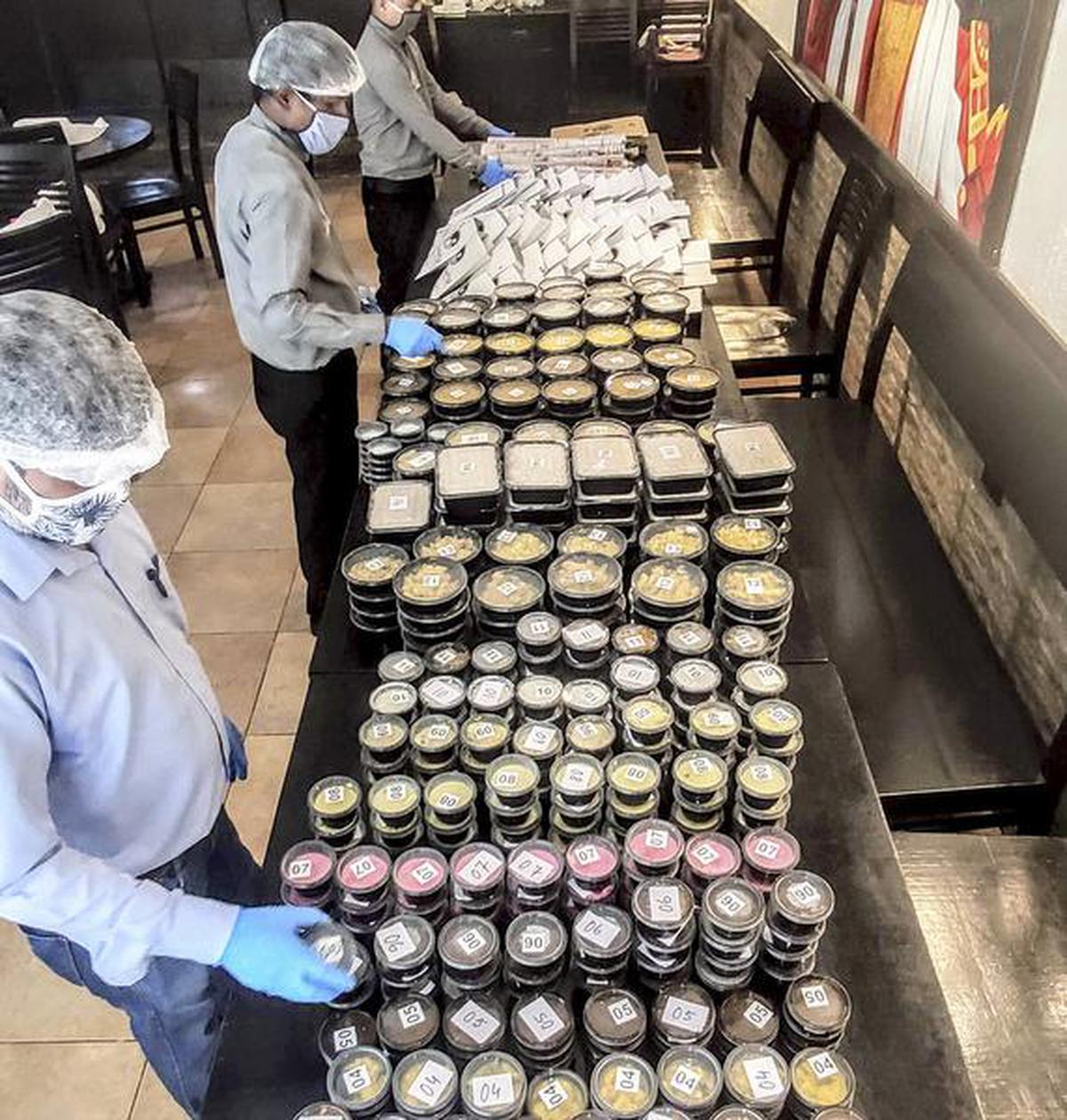 He says that they ran a survey this year, and found 65% of clients wanted delivery, 15% preferred take away, 10% wanted to dine in and the remaining 10% did not want sadhya. “Keeping the COVID-19 situation in mind, we thought it’s best to shift the whole experience into a takeaway/delivery format,” he says. Their meal (₹899 for takeaway) has 25 items, including ghee. They are also thoughtfully including banana leaves and step-by-step illustrations to make up for the lack of personal explanation that usually accompanies these meals. Across India, restaurants serving Kerala cuisine have been fielding calls from patrons enquiring about sadhya for the past few weeks.

Given the the lockdown restrictions in different States, ingredients had to be ordered well in advance. “There has been a bit of difficulty in procuring banana chips, shakara varatti and poovan palam that usually come from Kerala and Tamil Nadu,” says Zachariah. That Mallu Joint, which uses coconut milk and ada from Kerala, had to rely on Amazon, while Chennai’s Ente Keralam sourced its jackfruit from local farmers.

Ente Keralam normally has a long queue waiting outside the restaurant every Onam. But this year, it is a whole new ball game, says Tarun Mahadevan, director of Advantage Foods, which owns Ente Keralam. To better manage physical distancing, their sadhya will take place across four different locations: Ente Keralam Poes Garden and Anna Nagar, Eastern Wedge and The Marina.

Diners will need to pre-book. “46% of all our seats are already taken,” says Tarun adding that the sadhya will have 30 dishes including four types of payasam.

While packaging is a concern, the restaurants say they are trying to be eco-friendly. But there have been logistical issues.

How eco-friendly is it?

“Some of the dishes tend to leak and if one leaks, it will ruin the others. So, we have used high grade plastic containers; these are not single use plastic,” says Zachariah.

People are also sending sadhyas as gifts. “So we are customising and packaging them in gift boxes that use recycled paper and some plastic,” says Roshina.

Savya Rasa this year has a vibrant sadhya box with compartments for their 30 dishes (₹749). They are also open to clients bringing their own containers for takeaway. 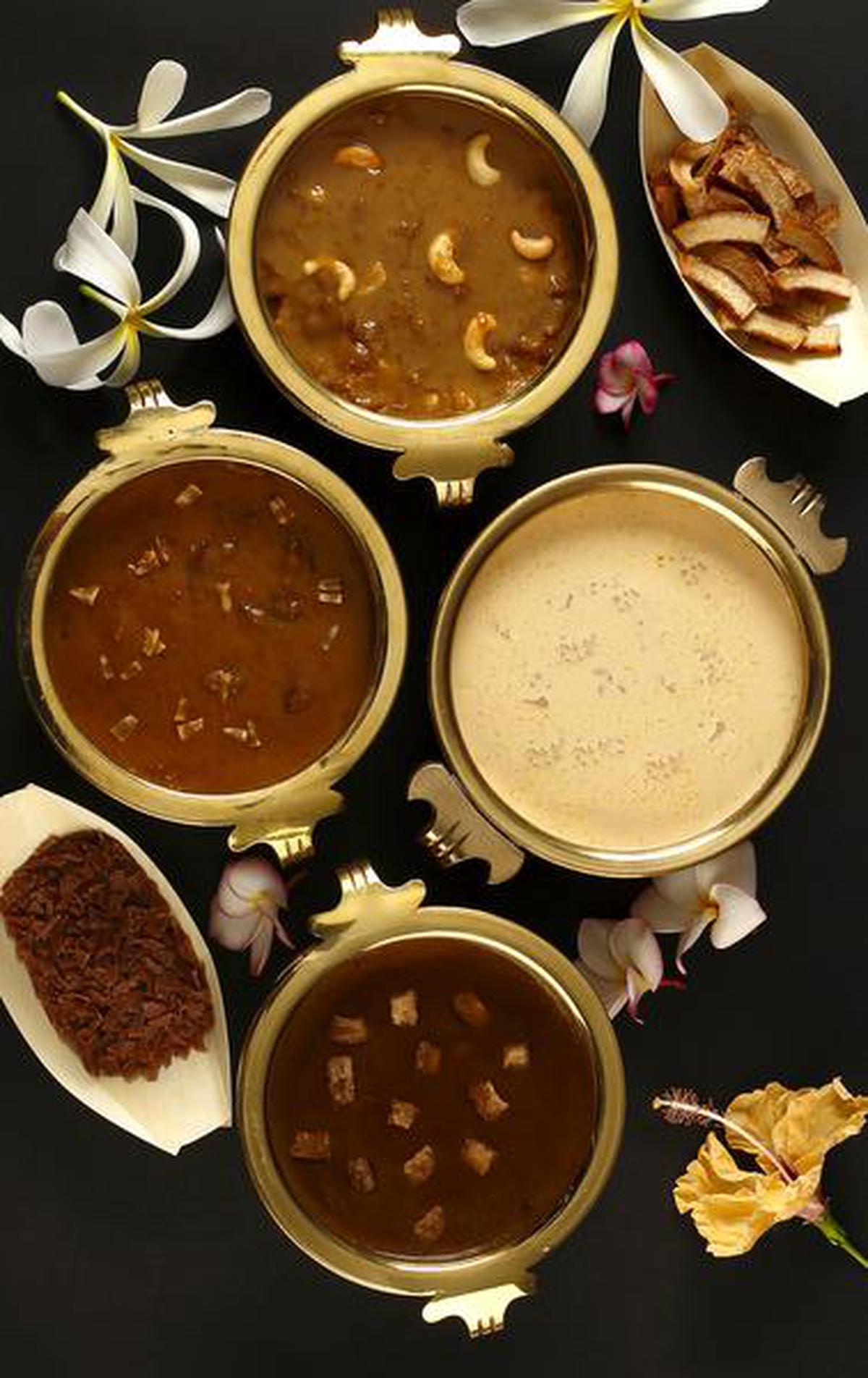 Though sadhya is traditionally a vegetarian meal, the restaurant often gets requests for non vegetarian accompaniments. “So, last year we had introduced sides of chicken or lamb at an additional cost,” says Japtej Ahluwalia, co-founder and executive director of the Pricol Gourmet that owns the restaurant. Though they will not be doing that this year, for the dine-in guests, the meal will start with drumstick rasam, believed to be an immunity booster.

Onam sadhya is a family event, says Japtej adding that last year they sold 900 covers on the two main days. This time the numbers are a fewer, in comparison, he says.

“Our restaurant capacity is 75 but now with distancing norms we are restricting it to 40 diners,” he informs. Over the years, this traditional meal has become popular with more restaurants that serve Malayali food opening in Chennai.

For some, this year there is a shortage of manpower, as many staff returned to their hometowns when lockdown began. Kappa Chakka Kandhari, with branches in Chennai and Bengaluru, has decided to forgo their annual traditional sadhya for this reason. But if it is any consolation, they are offerings four payasams for takeaway over four days, including ada pradhaman and palada payasam. (250 ml of four for ₹750). 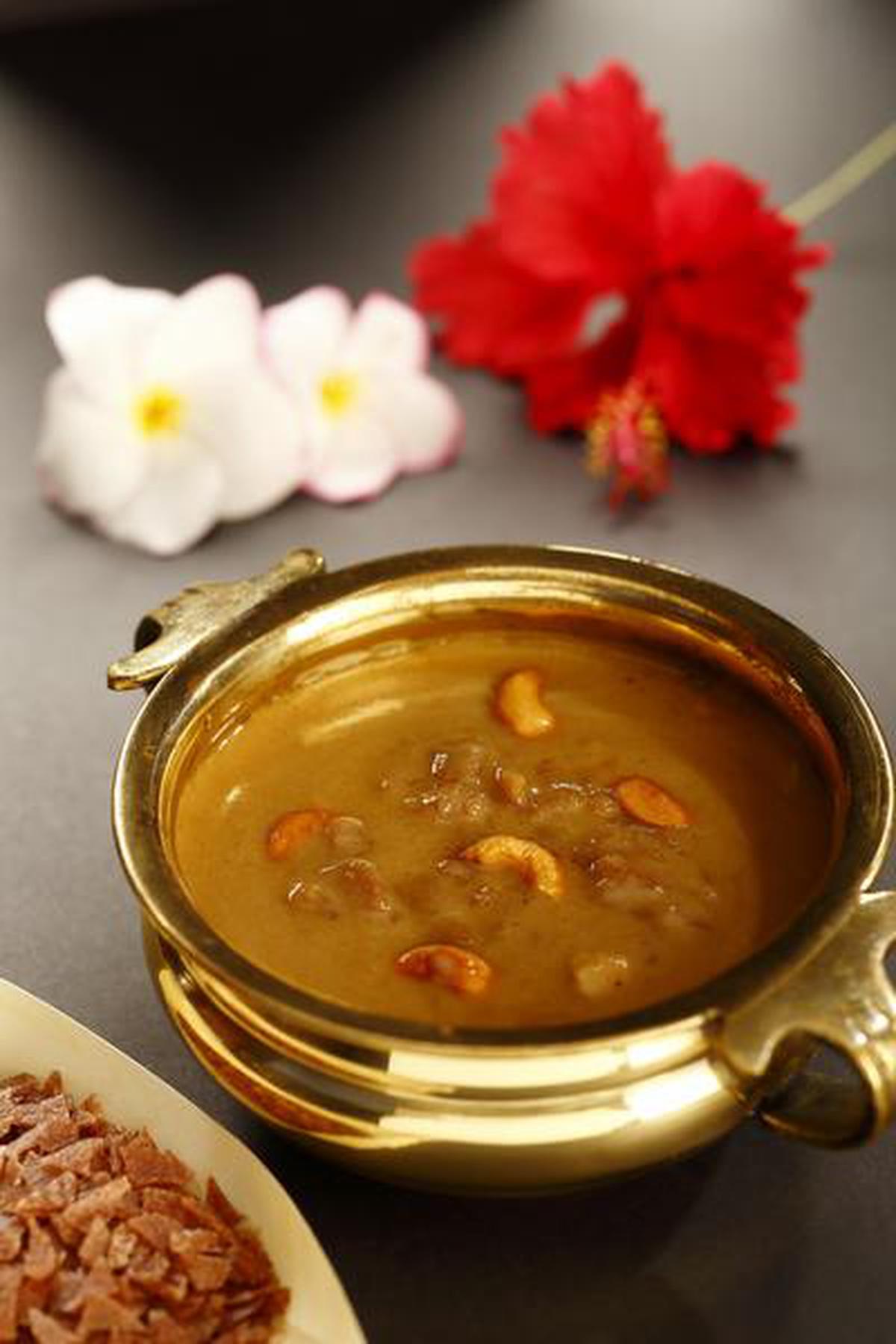 Mumbai’s popular Sneha restaurant has shrunk its sadhya to 10 dishes since they are are short-staffed. A staffer adds that they are also not sure “how many people will actually order sadhya this time”.

But it is not all gloom and doom. There are restaurateurs like Anna Jomon, whose eight-month-old restaurant Achyatis (Chennai) is benefiting from the harvest festival.

“After we launched, lockdown was implemented and we had to shut. But now with so many orders for sadhya we are open and delivering too,” says Anna, who does the cooking. “I’ll be making the Aramula Valla Sadhya that I used to relish with my parents during childhood, she says, adding that her cooking is “Kottayam-style”.

Her sadhya (25-plus items priced at ₹520) will feature kadali pazham payasam, munthiri pachadi (made of grapes), unniyappam, and red cheera thoran among others.