This giant cinnamon roll recipe is made with the most delicious soft dough, cinnamon-sugar filling, and a tangy cream cheese icing. Ready to go in one hour from start to finish! 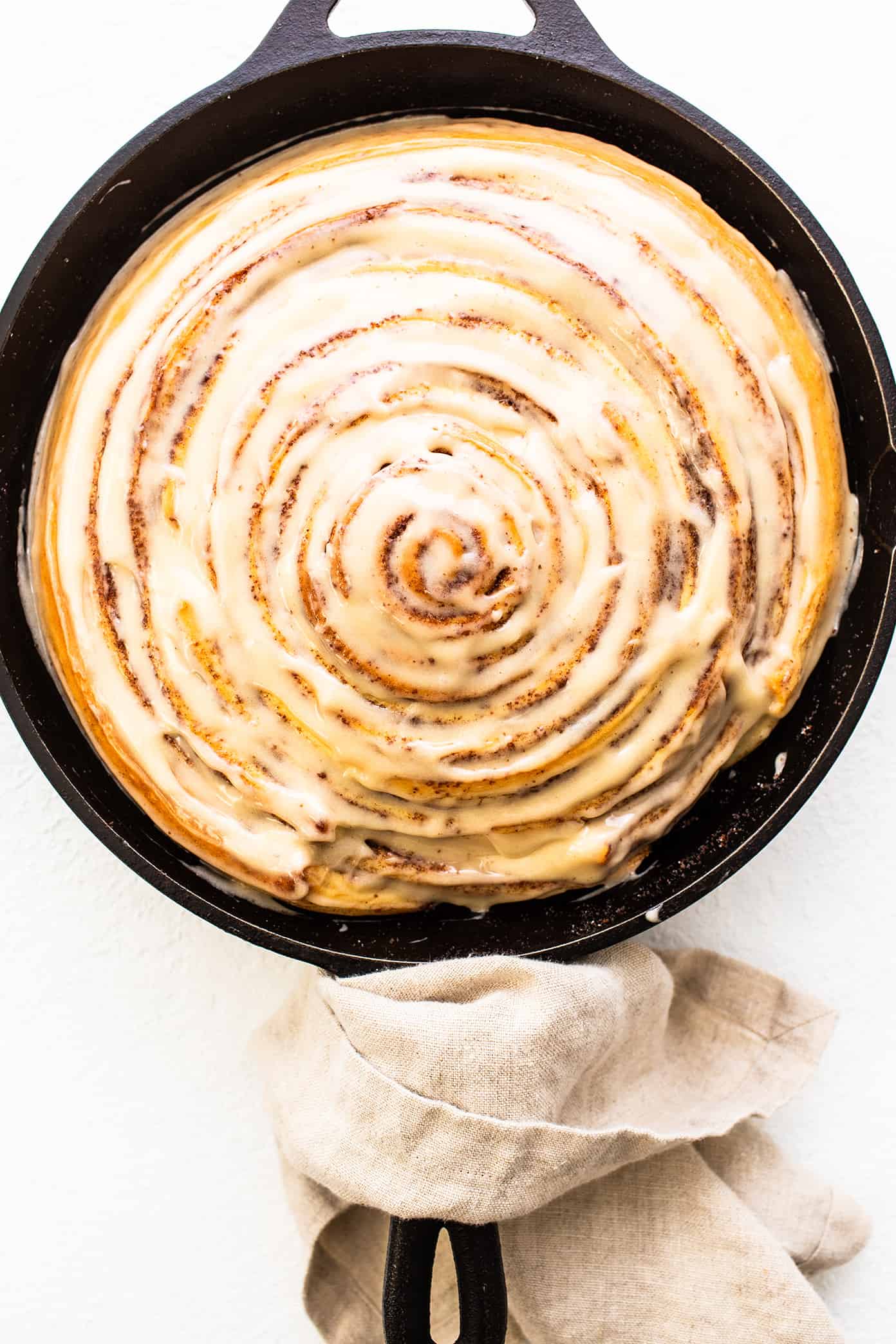 Only thing more delightful than a pan of cinnamon rolls?

Seriously, we’ve been having such a fun time serving up this variation on my 1-hour cinnamon rolls recipe over the past year. People are downright delighted each time this giant roll emerges from the oven. And when topped with my favorite cream cheese icing, sliced into wedges, served up nice and warm, and drizzled with a little extra icing for good measure (I insist), this giant cinnamon roll will definitely be stealing the show at your next brunch!

The great news for all of us is that this recipe is pretty simple to make and comes together easily in just one hour. There’s also no stand mixer required (although you are welcome to use yours if you own one), and the giant roll can be baked in a skillet, pie plate, or any other oven-safe pan that you prefer. We’ve also included detailed step-by-step instructions in the video below for exactly how to wrap this giant roll, so I recommend giving it a quick watch before you begin.

If you love cinnamon rolls as much as we do in our house, you simply must give this one a try. Enjoy!! 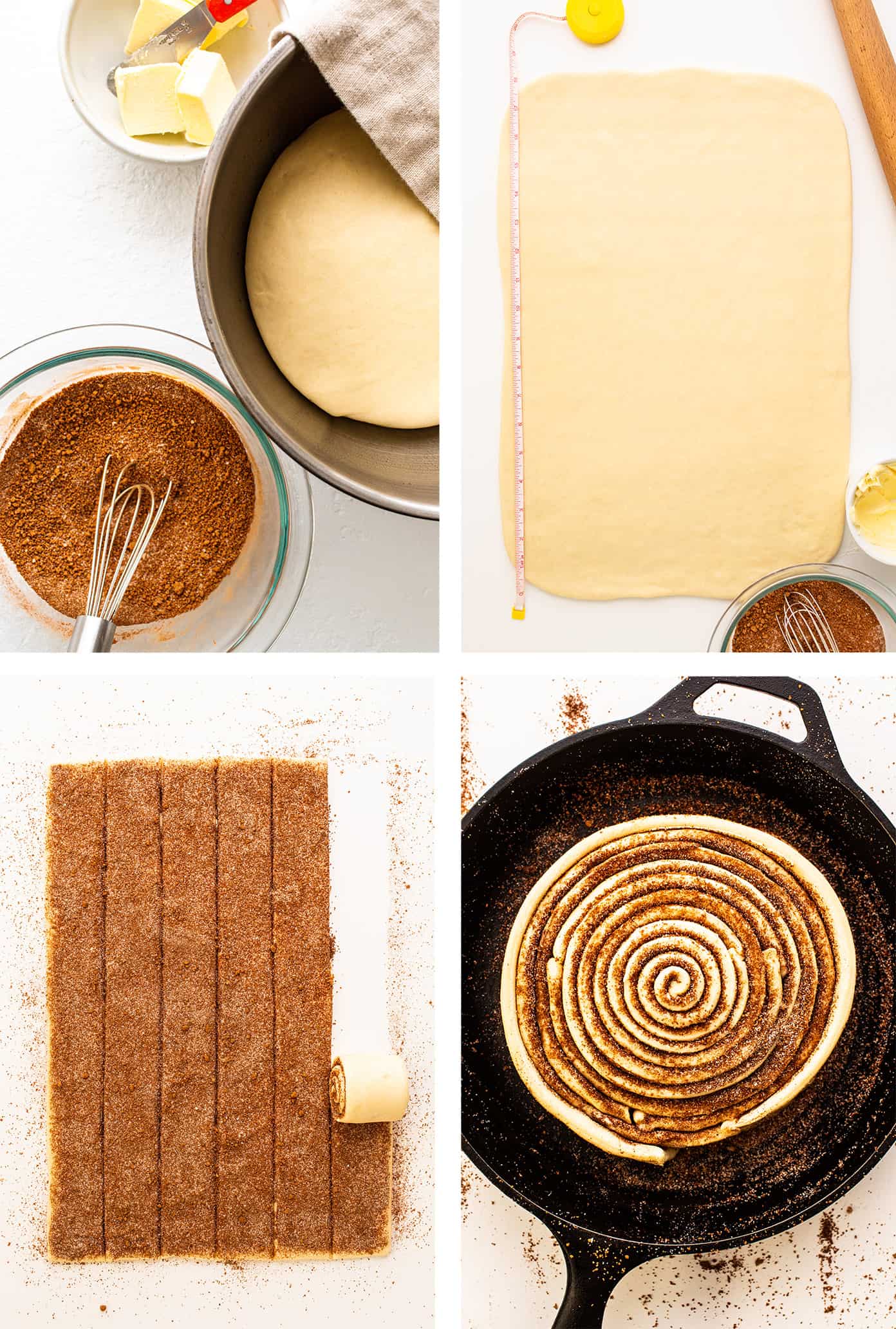 Before we get to the giant cinnamon roll recipe below, here are a few notes about the ingredients you will need: 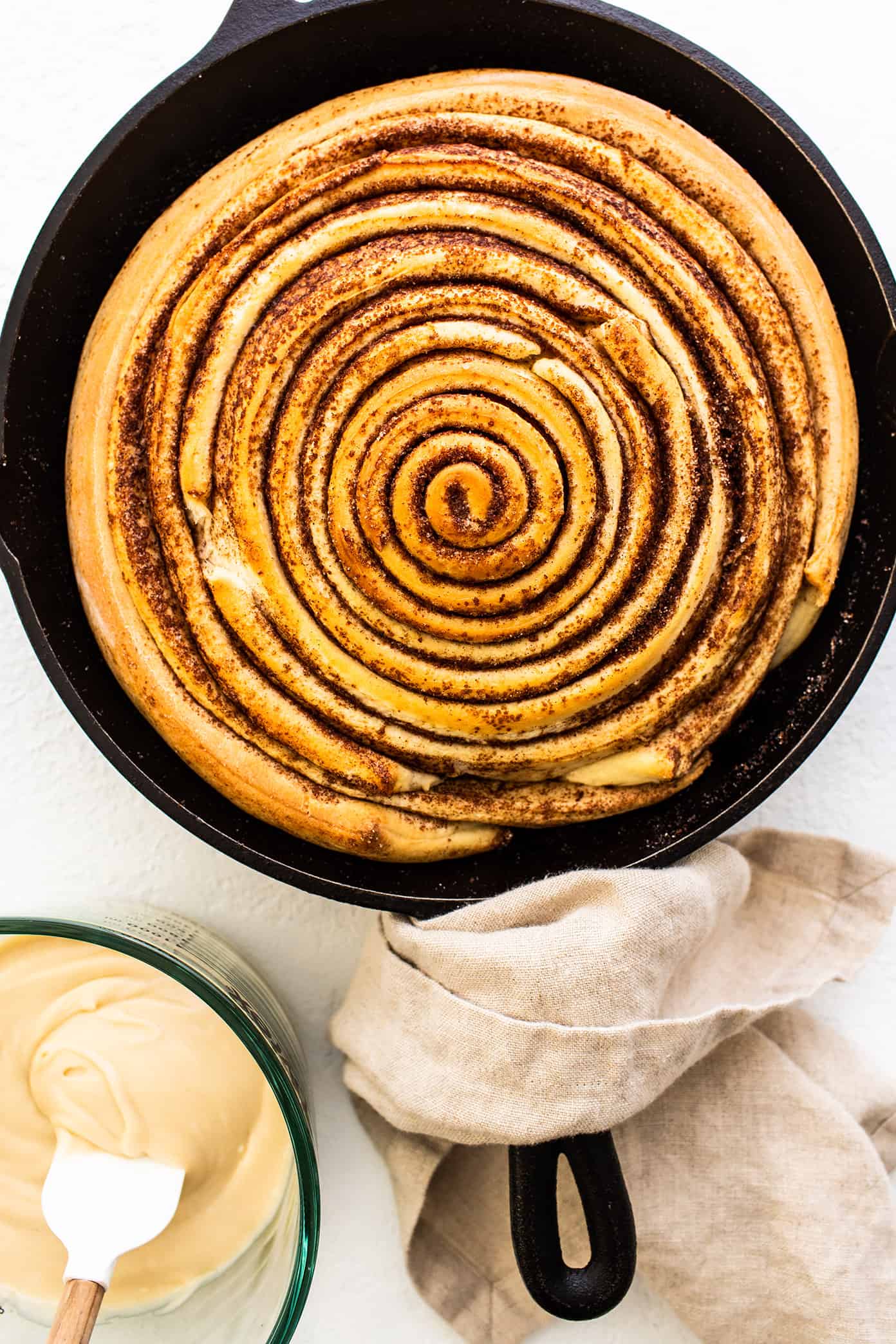 Full instructions for how to make this giant cinnamon roll are included in the recipe below, but here are a few extra tips to keep in mind: 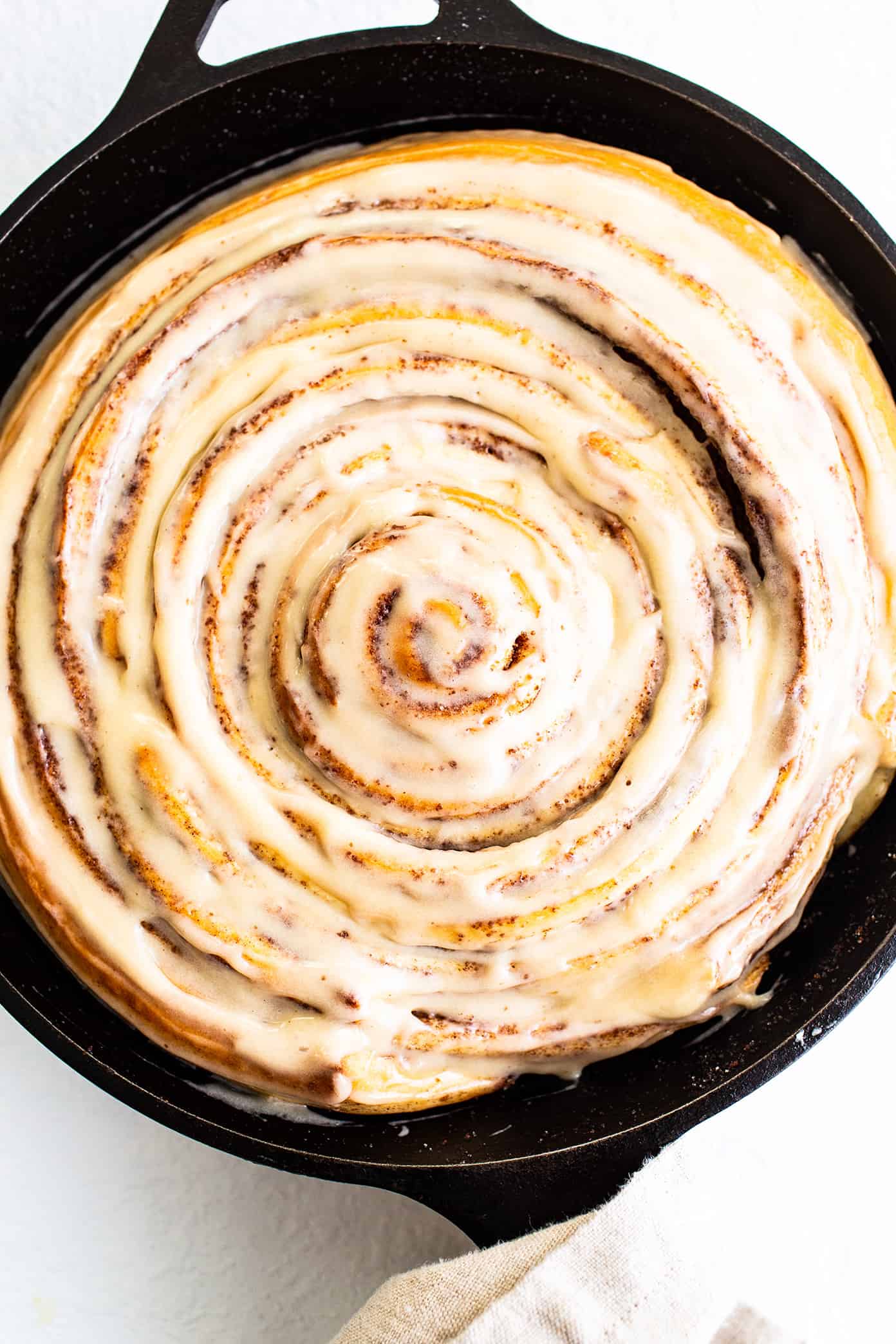 Looking for more cozy homemade cinnamon roll recipes to try? Here are a few of my faves: 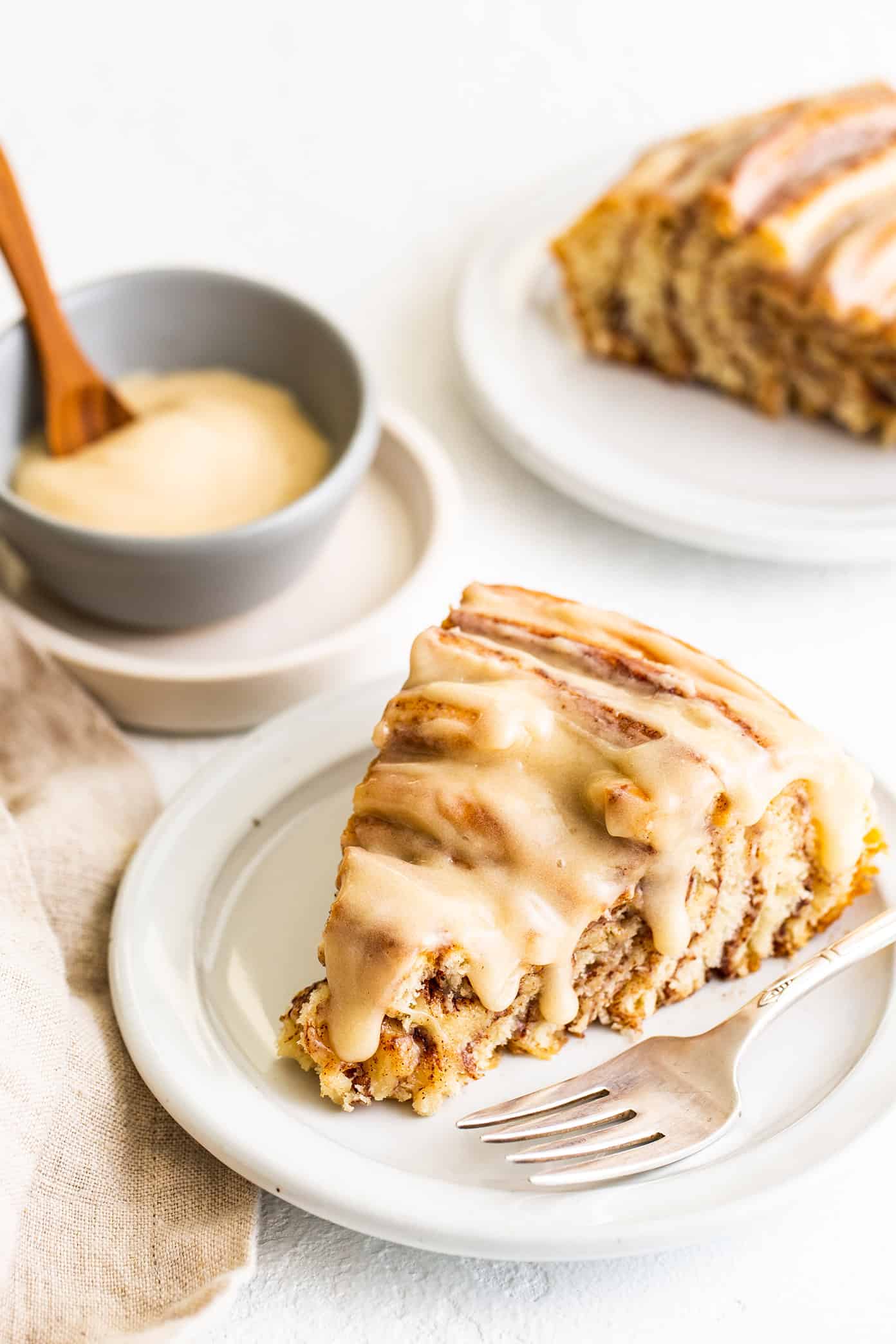 This giant cinnamon roll recipe is made with the most delicious soft dough, cinnamon-sugar filling, and a tangy cream cheese icing. Ready to go in one hour from start to finish!

Stovetop option: If you do not have a microwave, you can just heat the mixture on the stove over medium heat in a small saucepan.

Kneading the dough by hand: Alternately, you can stir the ingredients together in a large mixing bowl.  Then turn the dough out onto a floured surface and knead by hand for 5 minutes until smooth.

Skillet/baking dish: You are welcome to use any oven-safe skillet or baking dish that you prefer here. The recipe is designed to fit well in a 9-inch round pan, but it should also work just fine in a slightly larger or smaller pan too.