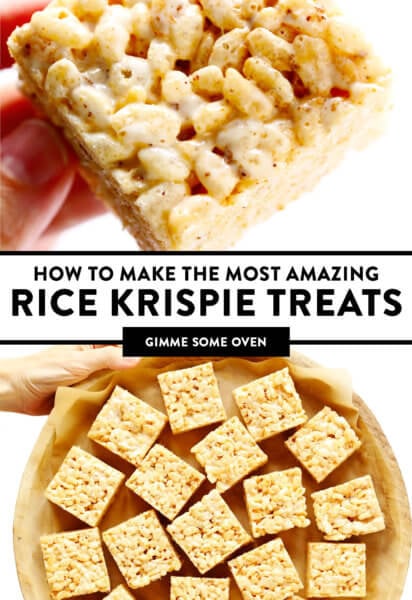 The classic 3-ingredient Rice Krispie Treats recipe is kicked up an irresistible notch with brown butter, toasted marshmallows, a splash of bourbon (if you’d like), and an extra pinch of sea salt. Crazy good! Raise your hand if you grew up loving rice krispie treats! ♡

These 3-ingredient wonders from the back of the Kellogg’s box were a total family fave in our house growing up, and also one of the very first recipes that I proudly learned to make “all by myself” as a kid.  But while the classic recipe will forever and always be a nostalgic fave — guys, I’m here today to tell you that they can be so much tastier with a few simple tweaks!

First, we’ve gotta brown that butter.  This step only takes an extra few minutes and adds the most delicious, rich and nutty flavor to these treats.  Second, why not toast those marshmallows?!  It literally takes less than a minute to broil marshmallows in the oven, and that extra roasty toasty flavor (as charred as you prefer) tastes just as amazing as you would think in this recipe.  Third, you’ve gotta add some extra sea salt.  In my opinion, it is notably lacking in the original recipe and serves to balance out the sugary-sweet flavor of the marshmallows.  And finally — perhaps most importantly — I’m a big believer that you need to add slightly less Rice Krispies than the original recipe calls for.  I love my rice krispie treats soft and chewy, not hard and dry, which can be solved by adjusting the cereal ratio a bit and lightly pressing (rather than firmly packing) the mixture into your baking dish.

If you would really like to kick these up an extra notch, I also love adding a good splash of bourbon to the melty marshmallow mixture, which is just as delicious as you would imagine but optional if you would rather not.  And, of course, you’re also welcome to add in extra peanut butter, chocolate chips, vanilla or sprinkles if you would like too.

Bottom line — these next-level steps only add about an extra 10 minutes or so to an already speedy prep time for these treats, and they kick the flavor up a majorly delicious notch.  So if you’re feeling nostalgic and want to make a batch, give this version a try! Here are the ingredients that you will need to make these next-level treats!

Detailed ingredient amounts listed in the full recipe below. How To Make Rice Krispie Treats:

Here is a brief overview of the steps for how to make rice crispy treats…kicked up a notch. ♡

Detailed instructions included in the recipe below, as always. Here are a few more suggestions for to customize this rice crispy treats recipe to your liking: Looking for some more nostalgic dessert recipes from our childhoods?  Here are a few of my personal faves: The classic 3-ingredient Rice Krispie Treats recipe is kicked up an irresistible notch with brown butter, toasted marshmallows, a splash of bourbon (if you’d like), and an extra pinch of sea salt. Crazy good!

Salt options: Alternately, you can sprinkle either fine sea salt or flaky sea salt on top of the rice crispy treats, once they have been pressed into the baking dish.  Add however much salt you prefer, to taste.

Storage options: Leftover rice crispy treats can be covered in the pan (or transferred to a separate food storage container) and stored at room temperature for up to 5 days.